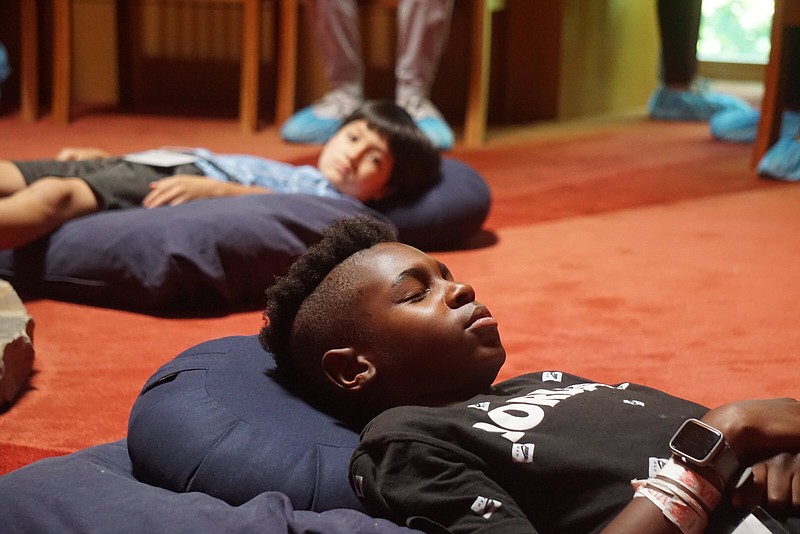 Selah Jones and Scott Dunavant participate in meditation Wednesday at the Arkansas House of Prayer in Little Rock. The two boys attended Interfaith Friendship Camp, learning about various religions throughout the week. (Photo by Marvin McLennon)

Officially known as the Friendship Camp of Central Arkansas, the weeklong gathering teaches rising third- through sixth-graders about the three Abrahamic religions -- Judaism, Christianity and Islam -- while also introducing them to a variety of other belief systems.

Participation is capped at 50, with no faith tradition allowed to receive more than half of the slots.

In predominantly Protestant Arkansas, there are plenty of Episcopalians, Presbyterians and Methodist parents eager to have their kids participate.

"When you open the application [process] in March, generally it's full within first 24 hours for Christians," said Sophia Said, executive director of the Interfaith Center of Arkansas.

After that, the organization works to find children from other religious communities. Atheists and agnostics are also welcome.

The camp costs $75 per child; $135 if a family sends two children. Scholarships are available for those who cannot afford to pay.

The recruitment process can be time-consuming.

"We take the next three months to fill it up with the minority faith groups," Said said.

But the diversity is important in order to achieve the camp's primary objectives -- building interfaith bridges and fostering friendships.

On Monday, when a reporter suggested that the goal was to promote tolerance, Said suggested other words might be more appropriate.

"We don't actually use the word tolerance in the camp," she said. "We talk about honoring, cherishing [and] celebrating."

Members of St. Margaret's Episcopal Church in Little Rock and Interfaith Center officials came up with the template for an interfaith camp in 2015, arguing that it would provide a learning opportunity that isn't available from traditional Vacation Bible School programs.

The first camp occurred six years ago and is held each summer, although it was held virtually, due to covid-19, in 2020.

This year's camp was held earlier this week at St. Margaret's. It was the first time since 2016 that the parish had hosted the event.

During Monday's opening ceremony, Mary Vano, the congregation's rector, welcomed her young guests and their parents, recounting the words of Jesus on the night before his crucifixion.

At the Last Supper, in John's account, Jesus told his disciples he would no longer refer to them as "servants" but as "friends," emphasizing that he had finally shared with them everything he had learned from his Father.

"Friendship is such a privilege and a joy and it is something holy, sacred," Vano said. "That is why we are so excited that you are here, because this week is all about friendship."

Rabbi Mark Biller of Synagogue Agudath Achim said the camp would provide an opportunity "to have fun but also to learn and to be with people who are different from you."

"Whatever religion we're in, we all really have the same goal which is trying to figure out how to live our best life and how to just be in the world and understand the world," he added before blessing the audience.

Abdul Aleem, a guest imam at Little Rock's Madina Institute and Mosque, told the youngsters the Prophet Muhammad had respected people from other faiths.

"The one thing which I want to convey is that Muslims and Islam [are] not against Jews; we are not against Christians," he said.

Rather than focusing on the differences between the three religions, Abdul-Bey focused on similarities.

"Looking at the three major Abrahamic faiths, if you do the research there, they have so much in common," he said.

"We're all human. We're all in this universe together, and we're all searching for ... oneness," he said.

Liz Emis, a member of First United Methodist Church in Bentonville and a certified candidate for deacon, attended this year's camp with her son, Jackson.

Her goal, she said, is to start a similar camp in Northwest Arkansas.

Rather than viewing Jesus as the sole doorway to heaven, Emis sees him as providing one, but not all, of the potential pathways to God.

"Christianity works for me," she said. "It is a way that I can have a personal and communal relationship with God here and now. [But] it is, in no way, the only way that people can encounter the divine and discover the divine within themselves."

For parents wanting to expose their children to a variety of religions, Friendship Camp offers a crash course in comparative religion.

Unlike traditional Vacation Bible School kits, which are available from religious publishing houses, Friendship Camp's blueprints were created from scratch.

"I researched six months for a curriculum for this camp and ... there was not a single curriculum out there," Said said.

There were peace camps for kids, but "those are very secular," she said.

Ultimately, Christian, Jewish and Muslim volunteers from Arkansas created a template of their own.

Now they are eager to share their model with other interfaith groups around the country.

This year's theme was "Calling All Superheroes." In keeping with that emphasis, the children made capes of their own and learned about "different faiths' superheroes."

Each morning during Friendship Camp, groups of students rotated between four classrooms, learning about Islam from a Muslim, Judaism from a Jew and Christianity from a Christian.

During the fourth 25-minute segment, students were taught about Buddhism, Unitarian Universalism and the Baha'i Faith.

In one classroom Monday, Reem Adai of Madina Institute and Mosque, showed students an animated video about the Prophet Muhammad. In the cartoon his body was visible but not his face. Muslims do not draw the visage of anyone they consider a Prophet, including Abraham, Moses and Jesus.

On a table beside her sat a model of the Kaaba, a building at the heart of the Grand Mosque in Mecca. Many Muslims consider it to be the "Bayt Allah" -- "The House of God."

A bilingual Quran was also within reach.

"We don't say that Abraham was a superhero, usually, in Judaism, but we do consider Abraham 'Avinu' -- Abraham 'our father,'" she said. Avinu is the Hebrew word for "father."

"He was the first person to teach others, also, that there is only one God," she added.

In another room, Presbyterian Jeannie Ford gave students the opportunity to name some of the character traits exhibited by heroes, including Jesus. A hero, they said, is a "good human", "kind-hearted", "loyal", "respectful" and "non-lukewarm," someone who was "honest", "resilient," "slow to anger" and could "change people."

One of the youngest students maintained that the son of Mary was more than a superhero, however, telling Ford, "But Jesus is God."

After a short lunch break, the rotations continued, with students alternating between art, music and team-building sessions. Following prayers, the groups rotated between mindfulness, meditation, Tai Chi and Labyrinth sessions.

On Monday, for example, the children wrote notes to the nurses at Arkansas Children's Hospital, thanking them for their work.

Other than the brief prayer time, when Christians and non-Christians met separately, all of the activities were interfaith, organizers said.

Care is given to food selection, according to volunteer Sally Fittsizer.

"All the food is vegetarian, halal and kosher," she said. "First Security Bank has donated a snack for every camper for every day that is gluten free and no nuts and all of that good stuff."

On Friday, the students went on a field trip to a synagogue and a mosque before returning to their host church for musical rehearsals and a final closing ceremony. 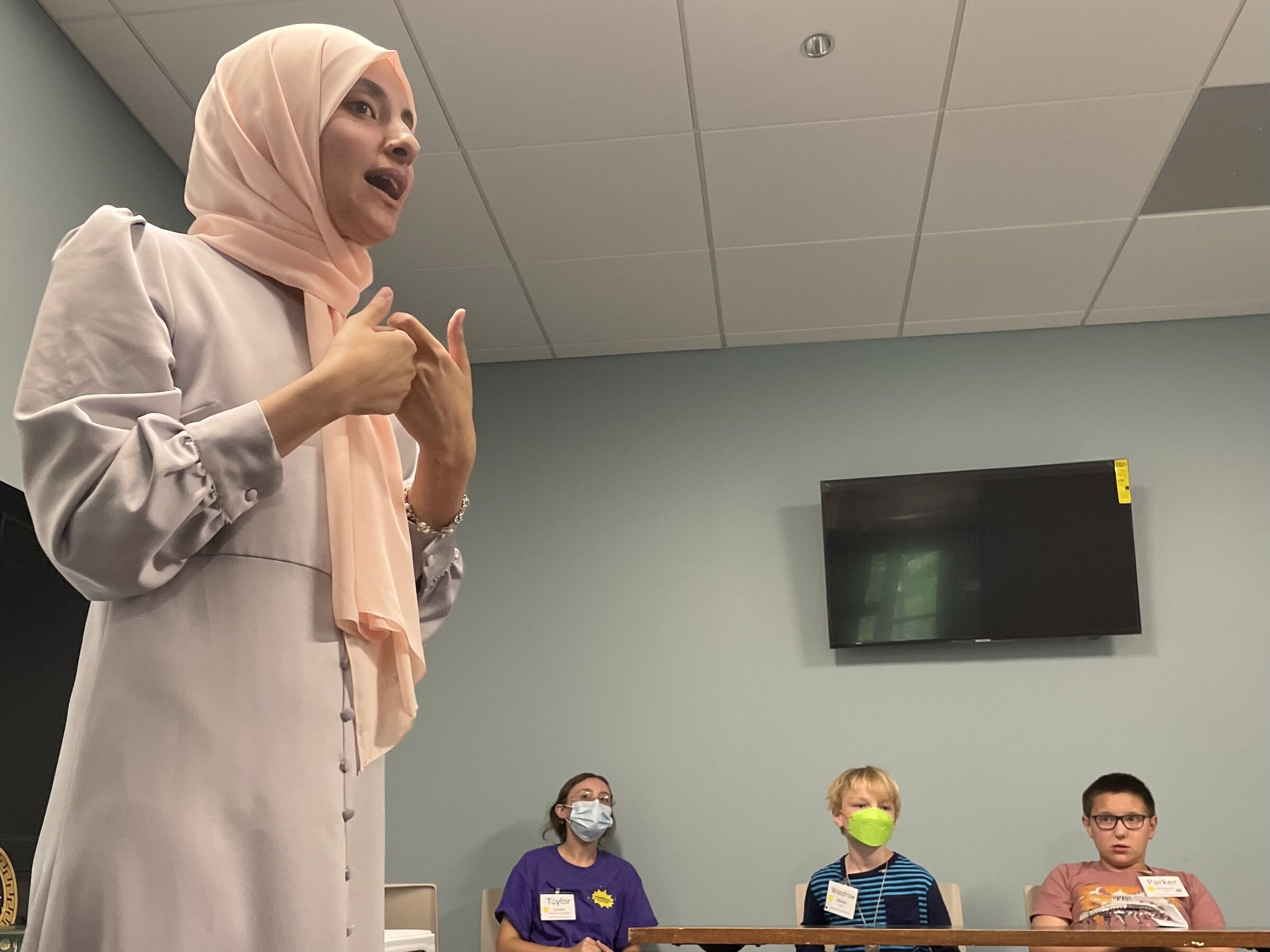 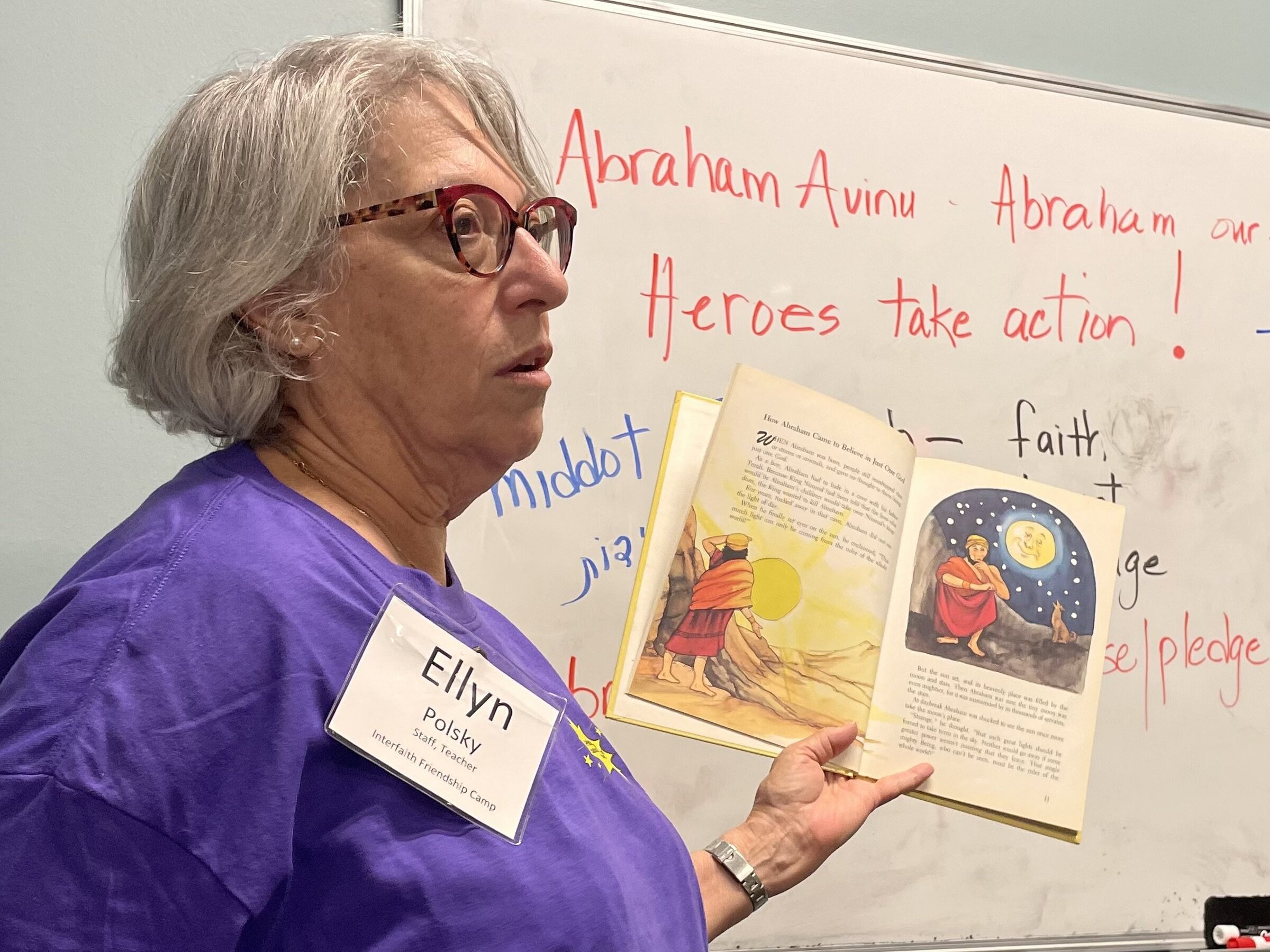 Ellyn Polsky teaches students about Judaism on Monday during the Interfaith Friendship Camp, which was held at St. Margaret's Episcopal Church in Little Rock. During her class, she focused on Abraham, the patriarch whose deeds are recounted in the book of Genesis. (Arkansas Democrat-Gazette/Frank E. Lockwood) 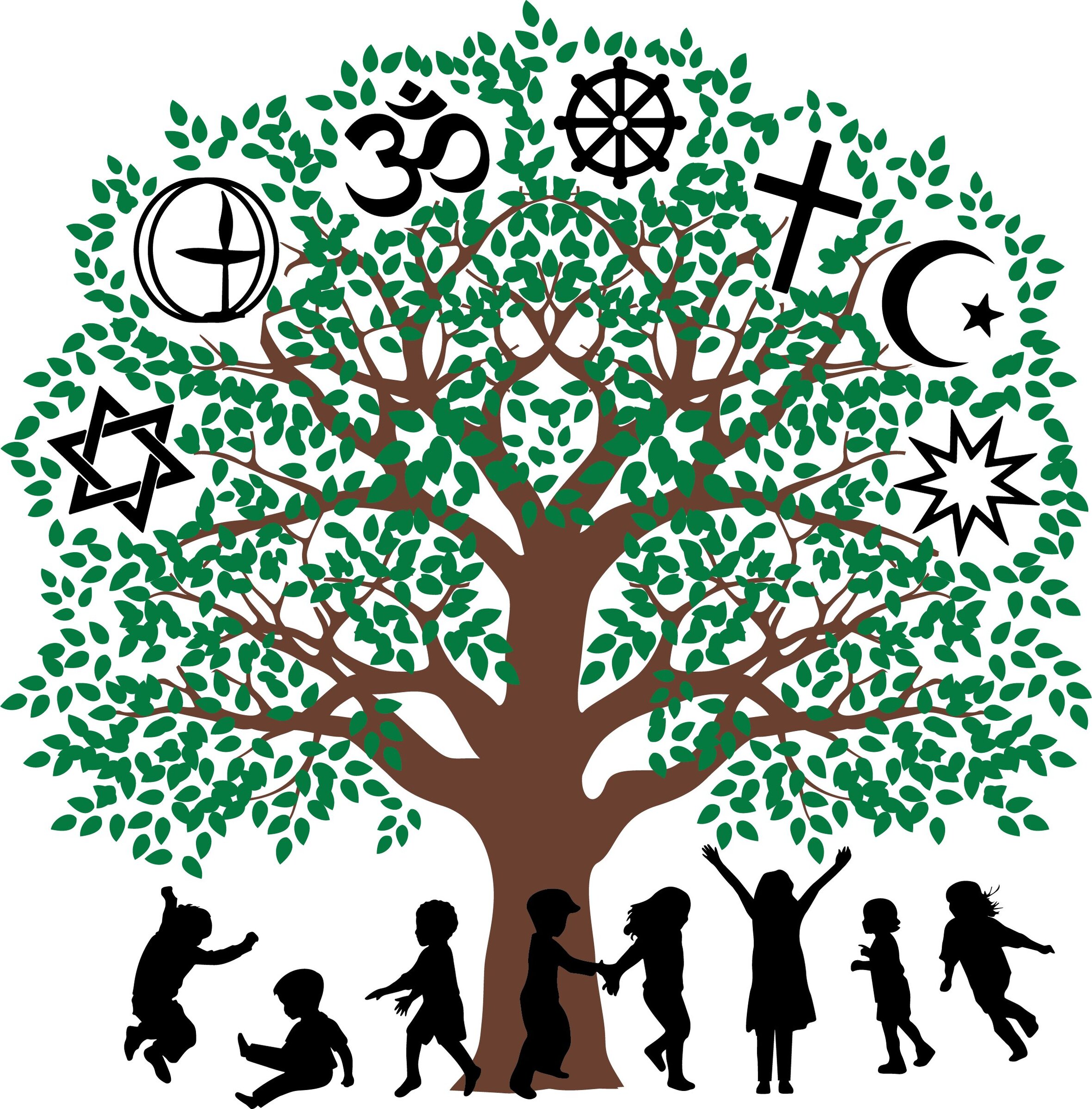 This is the official logo for Friendship Camp of Central Arkansas. 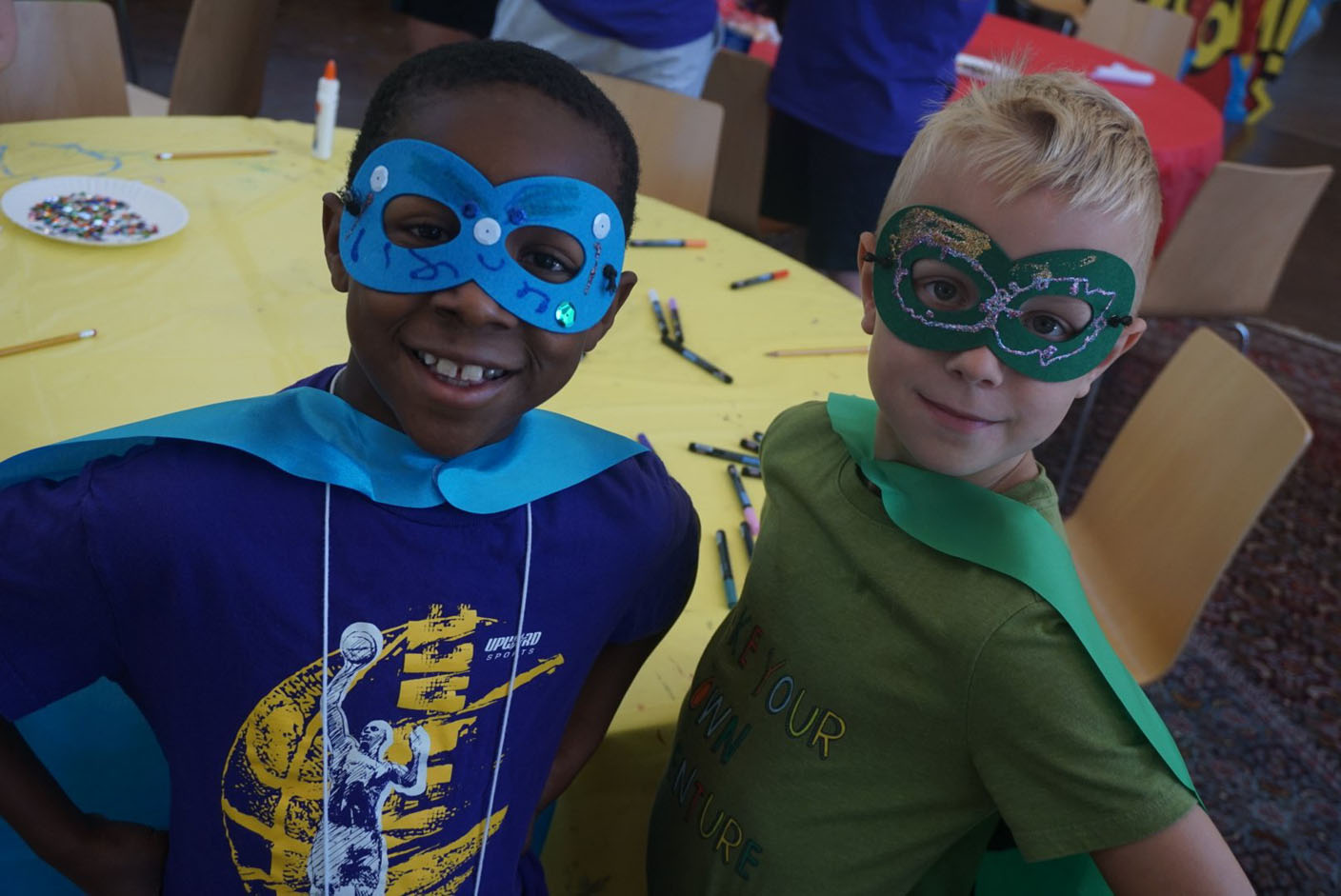 Jeremiah Goree (left) and Jackson Emis wear superhero costumes during Interfaith Friendship Camp in Little Rock on Wednesday, June 29, 2022. Participants studied the "superheroes" of the three Abrahamic faiths in the morning and designed their own capes in the afternoon. (Photo by Marvin McLennon)