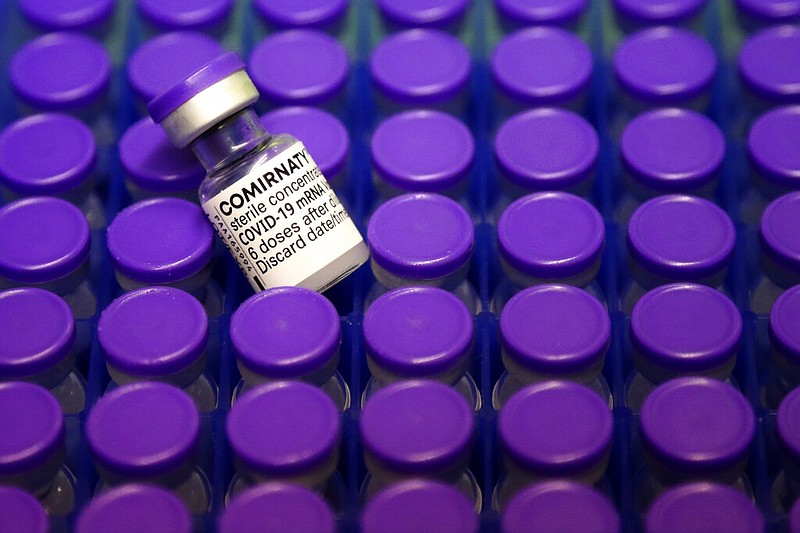 Roughly 1,000 Arkansas National Guard members risk losing federal pay after failing to get vaccinated against the coronavirus or apply for an exemption, according to preliminary data.

About 83% of the state's 6,600 Army Guard soldiers were vaccinated as of Friday afternoon, said Lt. Col. William Phillips, a spokesman for the Guard. Federal requirements mandated that Guard soldiers without pending exemptions get vaccinated by Thursday.

About 6% of Arkansas' 2,000 Guard airmen, who faced a federal deadline in December, were unvaccinated as of Friday.

Phillips cautioned that the percentages were approximations and could rise in the coming days as the Guard receives more vaccination reports from part-time members.

"Given that the bulk of our forces are drilling soldiers and airmen, these numbers could be higher based on that reporting because they don't work full time," he said.

The Arkansas National Guard employs about 1,200 full-time soldiers and slightly more than 800 full-time airmen, according to Phillips.

Guard members who remain unvaccinated or do not have a pending or approved vaccine exemption will be ineligible for federal duty. This means they won't be able to drill with their units or deploy on federal missions.

"The soldiers and airmen have the ability to say 'no they don't want to take the vaccination,' however, this is a legal and lawful order," Phillips said.

While Guard members who missed the deadline risk administrative action, the details of these consequences remain unclear. Arkansas top brass were waiting for the U.S. Army and the National Guard Bureau to issue clarifying orders. Phillips said he expected the guidance to come within the next few days.

Guard members who violate federal vaccination orders will still be eligible for state duty. This means non-compliant troops and airmen could still be activated by the governor to respond to state emergencies such as tornadoes or flooding.

An Arkansas law banning government covid-19 vaccine requirements prevents the state from requiring vaccinations as a condition of employment unless the Legislative Council approves an exception. The state is not requesting an exception for the Arkansas National Guard, according to Shealyn Sowers, spokeswoman for Gov. Asa Hutchinson.

"If I need to call up the Arkansas National Guard, I know they are ready and available to support state missions," Hutchinson said in a Friday statement.

Vaccine requirements are part of life in the military, said State Rep. Mark Berry, who formerly served as the highest ranking officer in the Arkansas National Guard.

"It's all about national security," Berry said during an interview Thursday. "It's for the protection of the force... you don't need an epidemic in a platoon or squadron."

A minority of service members opposing vaccination requirements is nothing new, Berry said. During his 45 years of service, he saw some in the military bristle at required swine flu and anthrax vaccines.

"In 20 years there will be another vaccine and another very small minority that will refuse to take it," he said.

"It's apples and oranges," he said.

Oklahoma Attorney General John O'Connor sued the Biden Administration in December, saying the mandate was "reckless and unlawful." In a statement at the time, O'Connor argued that the requirement could thin the ranks of the Oklahoma National Guard and did not "reflect the Land of the Free."

A federal judge ruled against Oklahoma later that month, writing that the claims were without merit.

Texas Gov. Greg Abbott called the requirement "unconstitutional" in a statement announcing a lawsuit against the federal government in January. Abbott and other state officials have argued that unless Guard members are federally deployed, they fall under the command of the governor of their state.

Alaska has also filed a lawsuit against the federal requirement.

Defense Secretary Lloyd Austin has refused requests to exempt states from the federal requirement. He warned in January that Guard members could lose their status if they refused to get vaccinated in letters to the governors of Alaska, Idaho, Mississippi, Nebraska, Iowa, Texas and Wyoming.

In the days leading up to Thursday's vaccine deadline, nearly 13% of Army National Guard soldiers across the country were unvaccinated. Up to 40,000 troops had yet to get shots, The Associated Press reported June 25.