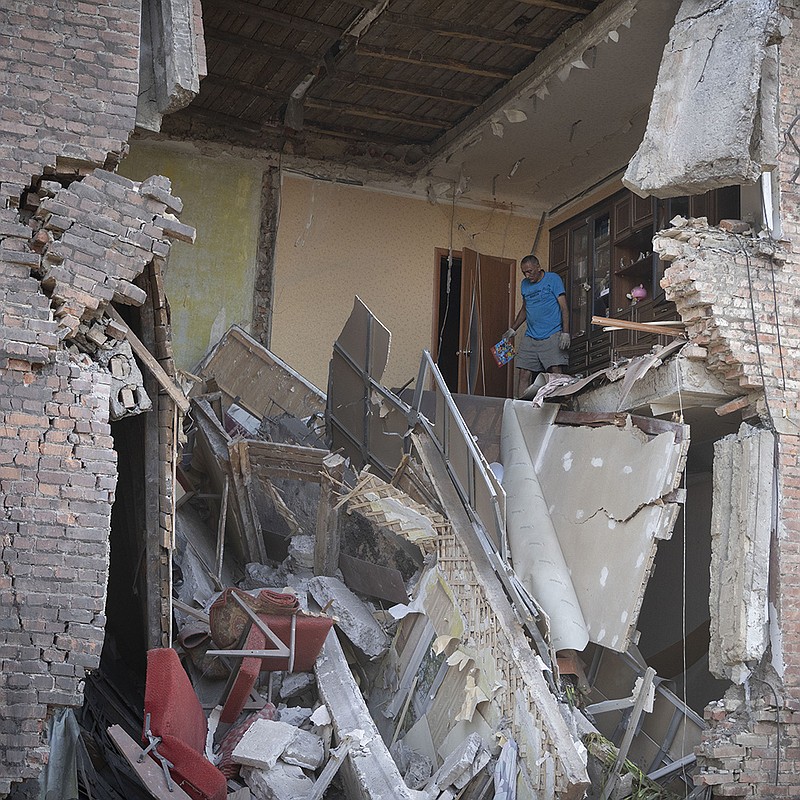 A man salvages belongings from an apartment that was destroyed Friday in a Russian rocket attack in the city center of Bakhmutin in eastern Ukraine’s Donetsk province. At least four people were killed, officials said. Another attack in Serhiivka near Odesa killed at least 21 people. More photos at arkansasonline.com/ukrainemonth5/. (AP/Efrem Lukatsky)

WASHINGTON -- The U.S. announced on Friday that it will provide Ukraine with $820 million in new military aid, including new surface-to-air missile systems and counter-artillery radars to respond to Russia's heavy reliance on long-range strikes in the war.

Russia in recent days has launched dozens of missiles across Ukraine and pinned down Ukrainian forces with continuous fire for sometimes hours at a time. Ukraine's leaders have publicly called on Western allies to quickly send more ammunition and advanced systems that will help them narrow the gap in equipment and manpower.

All told, the U.S. has committed more than $8.8 billion in weapons and military training to Ukraine, whose leaders have sought more help from Western allies to repel larger and heavily equipped Russian forces. About $7 billion of that aid has been announced since Russia's February invasion.

"We are going to support Ukraine as long as it takes," President Joe Biden said this week at a news conference during the NATO summit in Madrid. He argued that Russia had already suffered a blow to its international standing and major damage to its economy from Western sanctions imposed over the invasion.

The U.S. is giving Ukrainians "the capacity" so that "they can continue to resist the Russian aggression," Biden said. "I don't know how it's going to end, but it will not end with a Russian defeat of Ukraine."

Much of the aid formally announced Friday will take weeks or months to reach Ukraine.

As part of the new package, the U.S. will purchase two Norwegian-developed anti-aircraft systems used to protect the airspace around the White House and Capitol in Washington.

A senior defense official told reporters the Norwegian systems are intended to help Ukraine transition away from using Soviet-era air defense systems that besides being well known to the Russians have to be repaired with spare parts that are hard to procure. The official briefed reporters on condition of anonymity to discuss military assessments.

"I am especially grateful today to the United States and to Biden personally for the package of support for Ukraine announced today, which includes very powerful NASAMS -- an anti-aircraft missile system that will significantly strengthen our air defense. We have worked hard for these supplies," Zelenskyy said late Friday in his nightly video address.

The Pentagon will also provide the Ukrainians with up to 150,000 rounds of 155-millimeter artillery ammunition. Given the high usage of artillery on both sides, it's unclear how long those new rounds would last. The official declined to say how many estimated rounds Ukraine and Russia are firing daily.

In addition, the Pentagon will buy four counter-artillery radars for Ukraine. Those new purchases, funded by the Pentagon's Ukraine Security Assistance Initiative, require weeks at a minimum for defense companies to build. Ukrainians are also being trained to use the newly provided systems.

The Pentagon will also provide additional ammunition for medium-range rocket systems it provided Ukraine in June, known as the High Mobility Artillery Rocket Systems. The ammunition will come from the Defense Department's own inventory under what's known as drawdown authority and will be made available to Ukraine more quickly.

This is the 14th package of weapons and equipment transferred to Ukraine from Defense Department stocks since August 2021.

The European Union also proposed $1.04 billion in short-term financial relief for Ukraine to shore up the war-ravaged nation's urgent cash needs, as Germany continues to hold up talks on a larger package, according to people familiar with the matter.

Ursula von der Leyen, the European Commission president, said the first part of an assistance plan "will allow us to give an immediate answer to the urgent needs of Ukraine."

"The EU will keep on providing relief to Ukraine and in the longer-term support its reconstruction as a democratic and prosperous country," she said Friday in a statement.

The emergency funding, which needs to be approved by all member states before it can be disbursed, comes as details of the larger package are still being worked out. EU leaders had reached a preliminary agreement on financial assistance.

Under the proposal, funds will be made available to Ukraine in the form of long-term loans on favorable terms, the commission said. The EU budget will cover the interest costs, and the loan will be backed for 70% of the value by amounts set aside from the EU budget.

The EU's larger assistance package would seek to make a "sizable" contribution toward covering Ukraine's 2022 financing gap, which is estimated to be around $10 billion, according to a draft text of the proposal. The commission will seek to raise funds on the market as early as this summer to fund the credit line.

Group of Seven countries have made about $20 billion of financial commitments to Ukraine so far, according to the draft text of the proposal.

A Russian airstrike on residential areas killed at least 21 people early Friday near the Ukrainian port of Odesa, authorities reported.

Video of the attack before daybreak showed the charred ruins of buildings in Serhiivka, about 31 miles from Odesa. The Ukrainian president's office said warplanes fired three missiles that struck an apartment building and a campsite.

The war has evolved into a grinding stalemate in which both sides are heavily reliant on artillery, according to Western officials and analysts. Until this week, mass casualties involving residents appeared to become less frequent as Moscow concentrated on capturing eastern Ukraine's Donbas region.

While Russia has not achieved its initial goals of toppling Ukraine's government, it is believed to be making slow progress in consolidating control over the Donbas.

Russian missiles struck the Kyiv region last weekend after weeks of relative calm around the capital and an airstrike Monday on a shopping mall in Kremenchuk killed at least 19 people.

Russian forces appeared to use an anti-ship missile in the mall attack, a type of weapon that a U.S. defense official in Washington official said Friday is not accurate against land targets.

Russia's defense ministry spokesman claimed earlier this week that warplanes fired precision-guided missiles at a depot that contained Western weapons and ammunition, which detonated and set the mall on fire. In addition to the direct hit on the mall, Ukraininan authorities said a factory was struck, but denied it housed weapons.

Zelenskyy noted that as in Monday's shopping mall attack in Kremenchuk, Russian forces on Friday appeared to use anti-ship missiles to hit Serhiivka.

"These missiles, Kh-22, were designed to destroy aircraft carriers and other large warships, and the Russian army used them against an ordinary nine-story building with ordinary civilian people," he said at a news conference Friday.

Twenty-one people -- including an 11-year-old boy, his mother and the 42-year-old coach of a children's soccer team -- were killed and 38 others, including six children and a pregnant woman, were hospitalized, Ukrainian officials reported. Most of the victims were in the apartment building.

Kremlin spokesman Dmitry Peskov reiterated that Moscow is not targeting residential areas. Ukraine's presidential office said Russian strikes in the past 24 hours also killed civilians in eastern Ukraine -- four in the Kharkiv region and another four in Donetsk province.

Ukrainian authorities interpreted the Serhiivka attack as payback for the withdrawal of Russian troops from Snake Island a day earlier, though Moscow portrayed their departure as a "goodwill gesture" to help unblock exports of grain.

Russian forces took control of the island in the opening days of the war in the apparent hope of using it as a staging ground for an assault on Odesa, Ukraine's biggest port and the headquarters of its navy.

"The occupiers cannot win on the battlefield, so they resort to vile killing of civilians," said Ivan Bakanov, head of Ukraine's security service. "After the enemy was dislodged from Snake Island, he decided to respond with the cynical shelling of civilian targets."

"Snake Island is key for controlling the Black Sea and could help cover the Russian attack if the Kremlin opted for an amphibious landing operation in Odesa or elsewhere in the region," he said. "Now those plans are pushed back."

Ukraine's military claimed a barrage of its artillery and missiles forced the Russians to flee the island in two small speedboats. The exact number of troops withdrawn was not disclosed.

Early in the war, the island became a symbol of Ukrainian defiance. When a Russian warship demanded that its defenders surrender, they supposedly replied: "Go [expletive] yourself."

Although the pullout did not guarantee the Black Sea region's safety, Zelenskyy said it would "significantly limit" Russian activities there.

In eastern Ukraine, Russian forces kept up their push to encircle the city of Lysychansk, the last stronghold of resistance in Luhansk, one of two provinces that make up the Donbas.

"The shelling of the city is very intensive," Luhansk Gov. Serhiy Haidai said. "The occupiers are destroying one house after another with heavy artillery and other weapons. Residents of Lysychansk are hiding in basements almost round the clock."

Haidai said the Russians were fighting for control of an oil refinery on the city's edge. But Russian Defense Ministry spokesman Igor Konashenkov said Russian and separatist forces had taken control of the refinery as well as a mine and a gelatin factory.

In other developments, a pro-Moscow separatist news agency in eastern Ukraine reported that two more Britons it identified as mercenaries fighting for Ukraine are facing the same charges on which three other foreigners were recently sentenced to death.

The news agency identified the pair as Dylan Healy and Andrew Hill, without providing further details.

Information for this article was contributed by Nomaan Merchant and Francesca Ebel of The Associated Press and by Jorge Valero and Alberto Nardelli of Bloomberg News (WPNS). 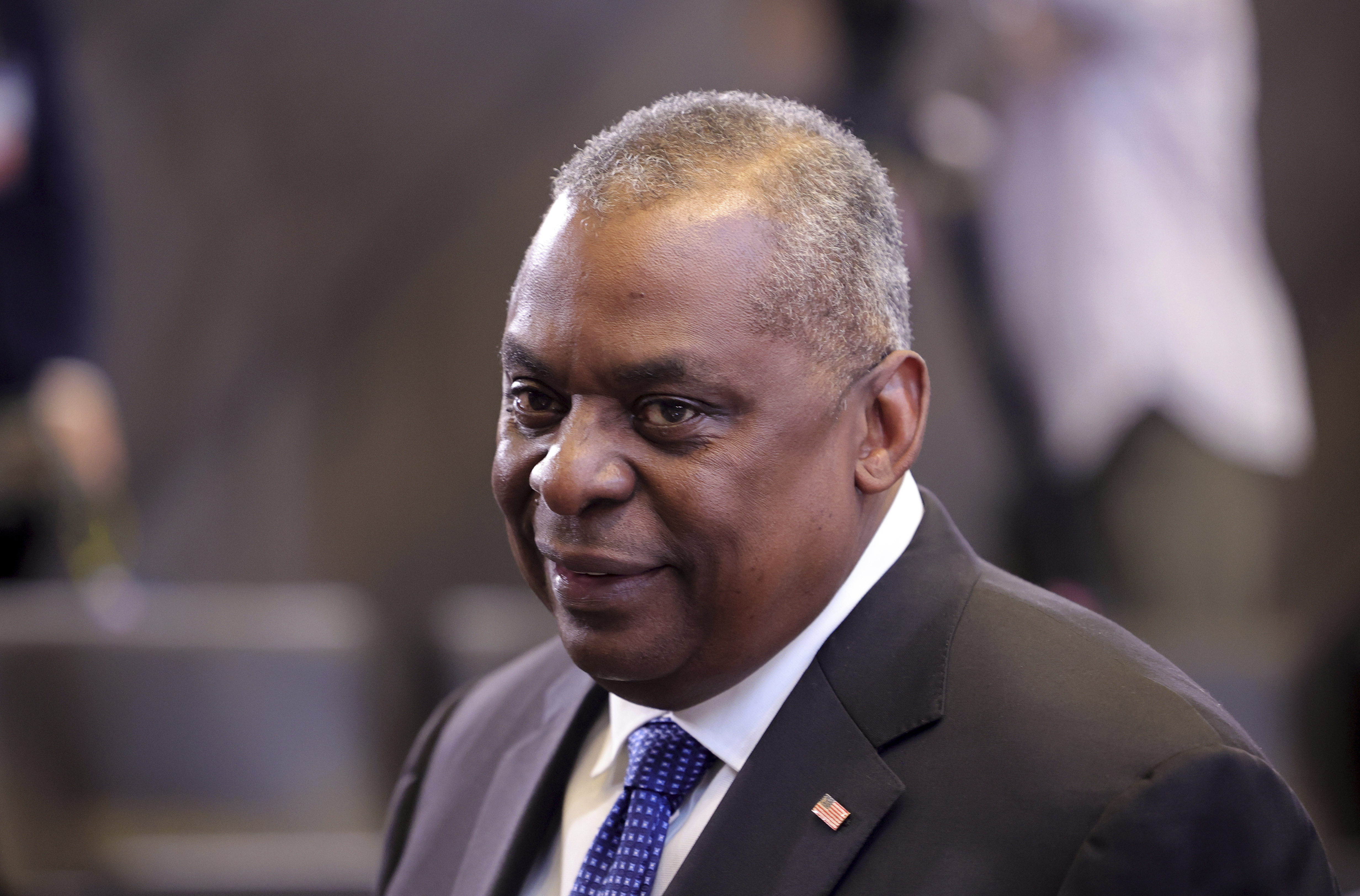 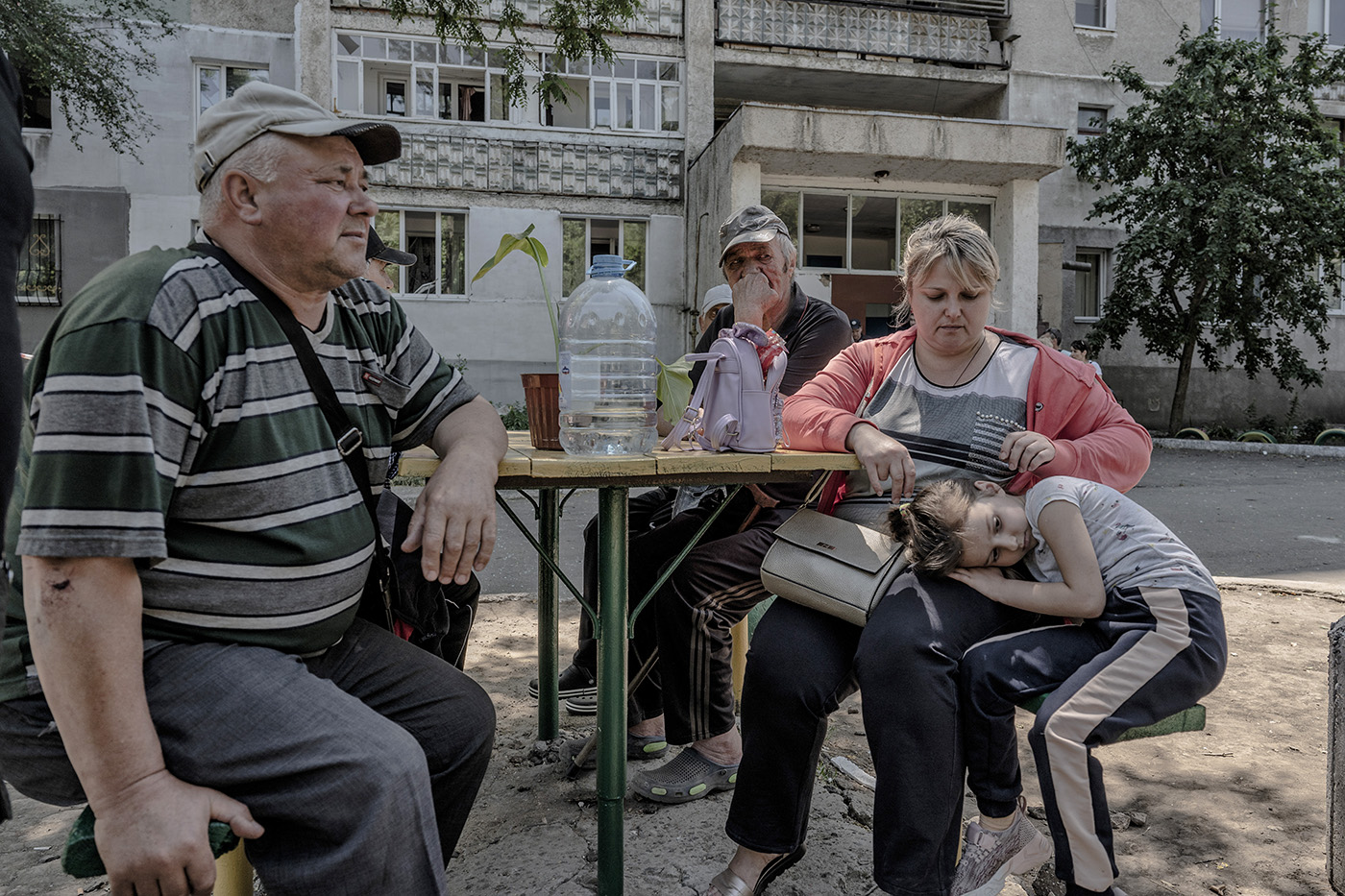 Oksana Sorochan comforts her niece, Margarita, on Friday after they spent the night in the cellar after deadly Russian strikes in the village of Serhiivka near the Ukrainian port city of Odesa. (The New York Times/Laetitia Vancon)