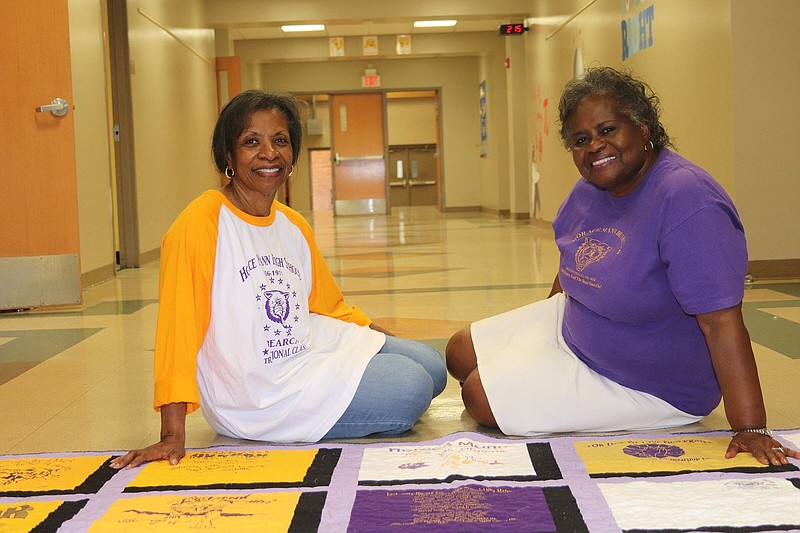 Their committee isn't the only committee working to bring the event to pass. But they may have the most difficult job ... planning what not only will be a landmark reunion, but the first major face-to-face event since the covid-19 pandemic wiped out the two major annual fundraisers hosted by the philanthropic class: Passion for Fashion, a spring fashion show; and Cooking for College, during which various chefs serve food samples.

Horace Mann Transitional Class of 1972 is so named because its members were denied the chance to graduate as a class. At the end of their junior year at what was Horace Mann High School, the Little Rock School District closed Mann as a high school as part of its racial desegregation plans. Harris, Gilbert and their classmates were dispatched -- despite their protests -- to other district schools for their 1971-72 senior year. (Gilbert went on to graduate from Parkview; Harris from Hall.) Their former high school is now Horace Mann Arts & Science Magnet Middle School.

Luckily, the class that should have been the 1972 Horace Mann High School class stayed in touch. Gilbert recalls their first attempt at a reunion.

"We didn't think we could do a reunion, because we didn't graduate together," she says. So in 1981, members attended the 10-year reunion of the Horace Mann Class of '71. But the following year, they held their own reunion.

"It was a shock. ... We did really well," Gilbert says. "Probably as well as any of those [other] schools did in their reunion efforts."

Since the 1982 reunion, the transitional class has gotten together every five years. Gilbert has stayed involved with the class all that time.

"I found it pretty astonishing because we started out thinking we couldn't do it, [and got] to the point that we did it [regularly]," she adds.

And, since 2002, the class has awarded some $50,000 in Edwin L. Hawkins "I Challenge You" scholarships to graduating high school seniors. The scholarships are named for the man who was principal of Horace Mann High at the time they were there.

Plans for this reunion have been ongoing for more than a year. Due to the pandemic halting the class's face-to-facers, fundraising efforts kicked off in March 2021 with a bulk letter-writing campaign. Says Harris,"We thought that was the way to go because that's all we could do. We usually do events to raise funds and of course, we couldn't do person-to-person events. So it was a challenge to develop something that could bring us some [revenue]."

But, Gilbert points out, it all worked for the benefit of the class. "We'd never done a letter-writing campaign. And people responded to that -- very well."

The class did have two in-person fish fries, Gilbert adds. "That was something new that we came up with so that we could see faces and help people connect what we were doing on a personal level." They also did a couple of virtual fundraising events. "We exceeded what we thought we were going to do."

"And it made us more inventive and adventurous," Harris interjects.

It was a pleasant surprise, notes Harris, that people responded to their direct solicitations. "Classmates that we don't generally see at a meeting ... donated to the scholarship [fund]."

The class has lost 80 of its members, but a little more than 200 are still living, Gilbert says.

"We include anyone who went to Horace Mann since 1970," which was the year the core class members were sophomores, she continues. "Some people went to Horace Mann in 1970 and then, because they knew we were getting [broken] up, they might have gone to the school they were going to be assigned to in the 11th grade. But we count everybody.

"We also have people [who are] part of our reunion who never went to Horace Mann; they went to one of the other schools. ... We may have gone to junior high school with them, but they felt comfortable coming in and joining us for our reunions. We've got a few like that."

The reunion will be a three-day event, July 15-17. Friday night is Reconnection Night. The members-only opener will be at the Hilton Garden Inn in Little Rock. Activities will include music and dancing -- "if you can," Harris quips -- along with games, challenges and more.

The Saturday night banquet, which will be open to the public, takes place at The Venue at Westwind in North Little Rock. A VIP reception at 6 p.m. will be followed by the main event, which begins at 7. Special guests slated to attend include Mayor Frank Scott Jr. and Democratic gubernatorial candidate Chris Jones. Clark Atlanta University professor and author Daniel Black, a native of Blackwell in Conway County, will be keynote speaker.

"The style of the banquet is kind of to give a little snapshot of the fundraisers we have had over time to raise money for scholarships," Harris says, explaining that the meal will be a reflection of the class' longtime Cooking for College fundraiser, customarily held in June. There will also be a "little snippet" of a fashion show, a nod to Passion for Fashion. A silent auction will also be featured; again there will be dancing.

But highlighting the evening will be the awarding of scholarships. They average three to four recipients a year, but this year's recipients are expected to number more than 10, Harris says. "We're very proud of that."

Gilbert cites the theme of the reunion: "The Power of the Class of '72 Celebrates the Edwin L. Hawkins Scholarship."

"We want to believe that the power in being able to give these scholarships meant that we had to show power. That terminology, that statement ... comes from the Bible" -- Luke 10:1, which gives the account of Jesus sending out 72 new disciples.

"Their job was to go and do miracles, change people's lives. We thought that really resonated with what we were trying to do. That's why we use that theme, 'The Power of '72.' ... We were out to make a change; we wanted to give back.

"Basically, ... what our vision was, was to give honor to God for taking us from a little misfit [band] of classmates and going through a reunion, figuring out how to give back to the community. It took 50 years, but here we are trying to support a lot more students than we were able to do in 20 years. We're saying 'Thank you, God, for what you've done for us.' ... I mean, we were little kids, 18 years old, and put on a mission and didn't realize we were going to ... do some powerful things."

On that Sunday, the class will have its first Horace Mann Transitional Class of '72-led church service, with the minister, deacons, choir and others conducting the service all class members. The service will include a tree planting as a tribute to deceased classmates. Afterward will be a jazz brunch at Mann Magnet, with entertainment by a jazz trio from one of the local schools.

This class has garnered a lot of positive feedback and support and has reached out to involve others in its celebration. Gilbert notes that the classes of 1972 at other Little Rock high schools -- "Central, Parkview, Hall and Metropolitan" -- will be celebrating their 50-year reunions. "We've invited them to bring some of their representatives to our reunion and we will try to do the same with theirs." They've also invited all the other Horace Mann classes to reserve tables at the Saturday banquet.

And Mann Magnet has "been tremendously supportive," Gilbert says. Staff members have made financial and other donations. They will recognize Dr. Marcus Johnson, the principal, for providing the space for class fundraisers and meetings. "They have just been wonderful to us. Just wonderful."

Volunteering is nothing new to these two women. Harris, a physician, has also volunteered as a health fair participant and has served on some boards and with the Philander Smith College Alumni Association, Future Builders, Links, the Tidwell Project. "I believe I have been given much, so I'm required to give much," Harris says.

Gilbert, a retired vice president and general manager, volunteers as a board member of her neighborhood homeowners' association. She also volunteers with the Dunbar Horace Mann National Alumni Association; teaches classes and volunteers as a greeter at St. Mark Baptist Church.

"My giving is on the activist kind of level," Gilbert says."I grew up in a family where we gave back ... . It becomes second nature and you just do it."

Especially as far as the transitional class and its good works are concerned.

"We have tried to be an example of what you can do when you think you can't do anything," Gilbert says, "an example to people our age; an example to the alumni, to younger ... students, to the community. And it doesn't make a difference what color a person is or what their heritage is ... . You can truly achieve anything if you're willing to work for it and you trust the right source.

"Just because you start off a little unsteady doesn't mean you're not going to reach the promised land."