Lonsdale lawmaker says he’s ‘fine’ with not being reimbursed for missed meeting, but ‘shocked’ at ethics ruling 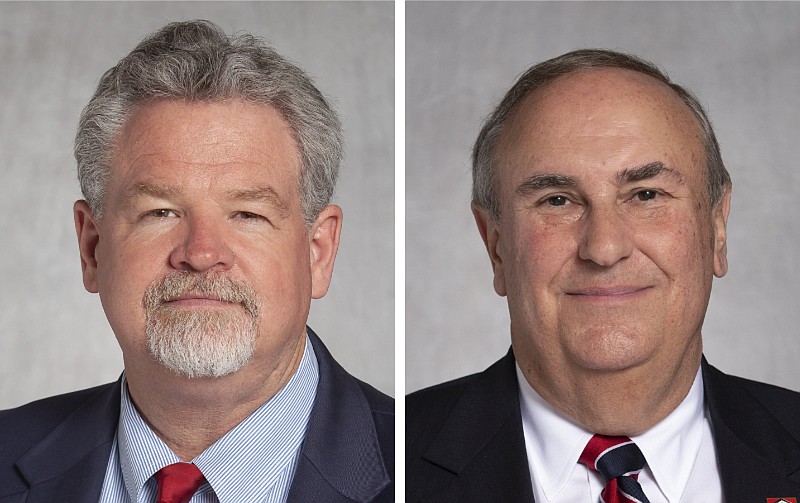 Arkansas Sen. Alan Clark, R-Lonsdale, said he made a mistake in asking Sen. Mark Johnson, R-Ferndale, to sign Clark's name on a sign-in sheet to be paid reimbursement for a Senate Boys State committee meeting June 3 that Clark didn't attend because he was sick.

Since Clark began serving in the Senate in 2013, "I have never asked anybody to sign me in," Clark said Thursday.

"I've never signed anybody in," he said in an interview in his Senate office at the state Capitol.

Clark said "we have a process where you sign in" to be paid reimbursement for attending legislative meetings.

"People look over it [and] they make a decision whether it is legitimate or not. I knew that process, and that process worked," he said. "They came back and made a decision I shouldn't be paid, and that's fine."

Clark said businesspeople aren't expected to pick up their own expenses when they travel and get sick. He questioned whether the state should require lawmakers to pay for their own airfare, hotel and conference fees at out-of-state conferences if they get sick and don't attend meetings at the conferences.

He said he's "amazed" that Senate President Pro Tempore Jimmy Hickey, R-Texarkana, filed an ethics complaint against him over the matter.

Clark said he "was shocked" at the Senate Ethics Committee's recommendations to the 35-member Senate for punishment against Clark.

Irvin said Friday in a text message, "I won't comment on any matters until after the report has been submitted to the President Pro Temp of the Senate."

The Senate Ethics Committee on Monday found that Clark admitted he didn't attend the Senate's Boys State committee meeting June 3, and he knowingly sought reimbursement from public funds by asking another senator to sign in Clark's name on the sign-in sheet for that meeting.

As penalties for the violations of Senate ethics rules, the Senate Ethics Committee recommended the Senate strip Clark and Johnson of committee chairman and vice chairman posts and their eligibility for per diem and mileage reimbursement for the rest of this year.

State lawmakers who live more than 50 miles from the state Capitol are reimbursed at the per diem rate of $155 for attending legislative meetings in Little Rock, according to Bureau of Legislative Research Director Marty Garrity. Lawmakers who live within 50 miles of the state Capitol are paid a lower per diem rate of $59, said Senate Director/Secretary Ann Cornwell.

They have been reimbursed at a rate of 58.5 cents a mile for their mileage.

In addition, state representatives and senators are paid $44,356 a year in salary by the state except for the House speaker and Senate president pro tempore, whose salaries are $50,661 a year.

Johnson said Monday that he signed in Clark for attending the June 3 meeting after he received a text from Clark at the end of the committee meeting that he was feeling ill, and Clark asked Johnson to sign him in. Johnson said that's the first time he has done anything like that.

Johnson said he made an erroneous assumption that Clark already had attended the Boys State committee meeting. He said he left the committee meeting for 30 to 40 minutes to go to a doctor's appointment before returning to the meeting. He said he later attended a Republican Party of Arkansas lunch hour meeting with Clark, who had a mask on at that event.

Clark declined to comment on the matter Monday afternoon. He later agreed to an interview with an Arkansas Democrat-Gazette reporter on Thursday afternoon.

Clark said he attended a legislative audit committee meeting June 2 and a Senate Republican caucus meeting and then went out to dinner, and he had been fighting what he thought was a head cold all week.

Clark said he decided to spend the night of June 2 in the Capitol Hill Apartments, northeast of the state Capitol, because of his head cold and not feeling well. He said his condition worsened overnight.

He said he got up June 3 in time to go the Boys State mock Senate meeting, which started at 8:30 a.m. but "decided not go to since I was running a fever."

Clark said Sullivan had repeatedly asked him to attend a noon-time meeting at the Republican Party of Arkansas, so he set the alarm clock and laid back down in his apartment.

"I got up for the sole purpose of attending that meeting at noon, but was ready at 11:20 and decided I would go over to the Capitol and sign in [and] then decided to call instead," he said.

Clark said he decided to sign in and draw his expenses for Friday "since I had already come over, driven over, going to drive home [but instead] spent the night..."

He said another senator indicated he wouldn't be at the Boys State meeting, so he texted Johnson and asked him if he would sign him in. He said he learned through testimony that Johnson asked for the sign-in sheet and told staff that he intended to sign in for Clark.

Hickey said Friday he appoints senators to the Boys State committee and he and Hester decided not to pay per diem to Clark for the June 3 Boys State meeting.

Clark said he went to the noon meeting at the Republican Party of Arkansas with a mask on and told people he was sick. In retrospect, he said he shouldn't have gone to that meeting.

He said he went to lunch with Sullivan after the meeting at the Republican Party of Arkansas and probably shouldn't have done that either, but there was not food at his apartment. He said he eventually went to Walgreens and went back to bed.

Clark said Senate Efficiency Committee Chairman Bart Hester, R-Cave Springs, later called him at 4 p.m., and Clark acknowledged that he asked Johnson to sign him in.

He said that was the last thing he heard about the matter until he received an email with the ethics complaint filed by Hickey.

Hammer has said he received the ethics complaints filed by Hickey on June 15.

Clark questioned the reasoning behind the Senate Ethics Committee's recommended punishment against him.

"Are they trying to take this, which compared to so many things, and send a message how pure we are with ethics, which is not the message that will end up coming out? Do they really think that it was that terrible? Do they think that I am trying to steal $159?"

Clark said he was only eligible for per diem for the June 3 Boys State meeting.

He said he doesn't know whether the ethics complaint filed by Hickey is political retribution against him.

On one hand, Clark said Hickey made complaints during Sen. Bill Sample's re-election campaign that Clark was helping Sample's opponent, and Clark also didn't vote for Hickey for senate president pro tempore-designate this year. In March, the Senate elected Hester over Hickey to be Senate president pro tempore-designate, putting him in line to be the Senate's leader from 2023-2025.

"But if that's not it, this self-righteous Pharisee thing, while at the same time being a preening martyr ... 'Aw shucks, I just had to do it,'" Clark said of Hickey. "That is great theater, so it really makes no difference which it is."

Clark said he didn't recruit Garland County Justice of the Peace Matt McKee of Pearce, who beat Sample in the primary, to run for the state Senate. He said he had advised McKee how difficult it was going to be to challenge Sample.

He said he gave McKee advice, but he didn't put on his name on anything related to McKee or contribute to McKee's campaign. He said he respects Sample and he loves McKee.

Hickey said Clark approached him about a rumor that Clark was helping McKee and he advised Clark that's between Clark and Sample. He said he didn't complain about Clark assisting McKee.

"It's obvious he's lashing out," he said of Clark.

Hickey said he filed the ethics complaint against Clark and Johnson because "it's bad enough it's taxpayer money, but it was also done in front of our staff.

"You are asking our staff to be an accomplice on an unethical act," he said.

Clark said he has been an opponent of the Senate's ethics rules that the Senate adopted in June 2018, at the behest of Sen. Jim Hendren, who is now an independent from Sulphur Springs.

The Senate approved an overhaul of its ethics rules after the conviction of five former state lawmakers over the past three years.

"The vote on the floor, who can vote no? This isn't a vote on ethics. It is a political vote," Clark said. "Hopefully, they have the ethics that we'll be able to defend ourselves."

Clark said "it appalls me" that the committee decided Johnson lied under oath and knew Clark didn't attend the June 3 Boys State meeting.

Clark said that almost every committee chairman, if not all, signs off on the list of those legislators who attend a meeting.

"You are chairing a meeting," he said. "You are generally not even aware that someone has signed in and walked out. Most members are conscientious about their attendance and signing in. And you can't control the governor's staff, for instance, calling you as soon as you have walked in for a meeting and asking you to come over. They don't check committee meeting schedules before they call you, nor does anyone else. Legislators get used to juggling a lot of balls in the air at one time."

Clark, who is unopposed in the November general election, said he plans to continue to serve in the Senate and will probably be more effective than ever and "a little meaner."

"When it comes to Mark, I will burn the house down," he said. "We'll talk about all the things that could be ethics charges, and some people will get real uncomfortable, but as for me the damage has been done."

For voter registration, Clark had a home address near Lonsdale from September 1999 until November 2014 when that address was changed to a home on the outskirts of Hot Springs, according to the secretary of state's office.

He said he lists a post office box in Lonsdale as his address because there are "enough crazy people" that he doesn't want legislative staff to give out his home address. He said the home that his family built and finished raising their children in is near Lonsdale

Clark said he has lived on the outskirts of Hot Springs for the past three or four years and has rented out the Lonsdale home for the past three years. He said his wife's mother died several years ago and for three years "we lived between two houses" because his wife inherited the house that she grew up in. 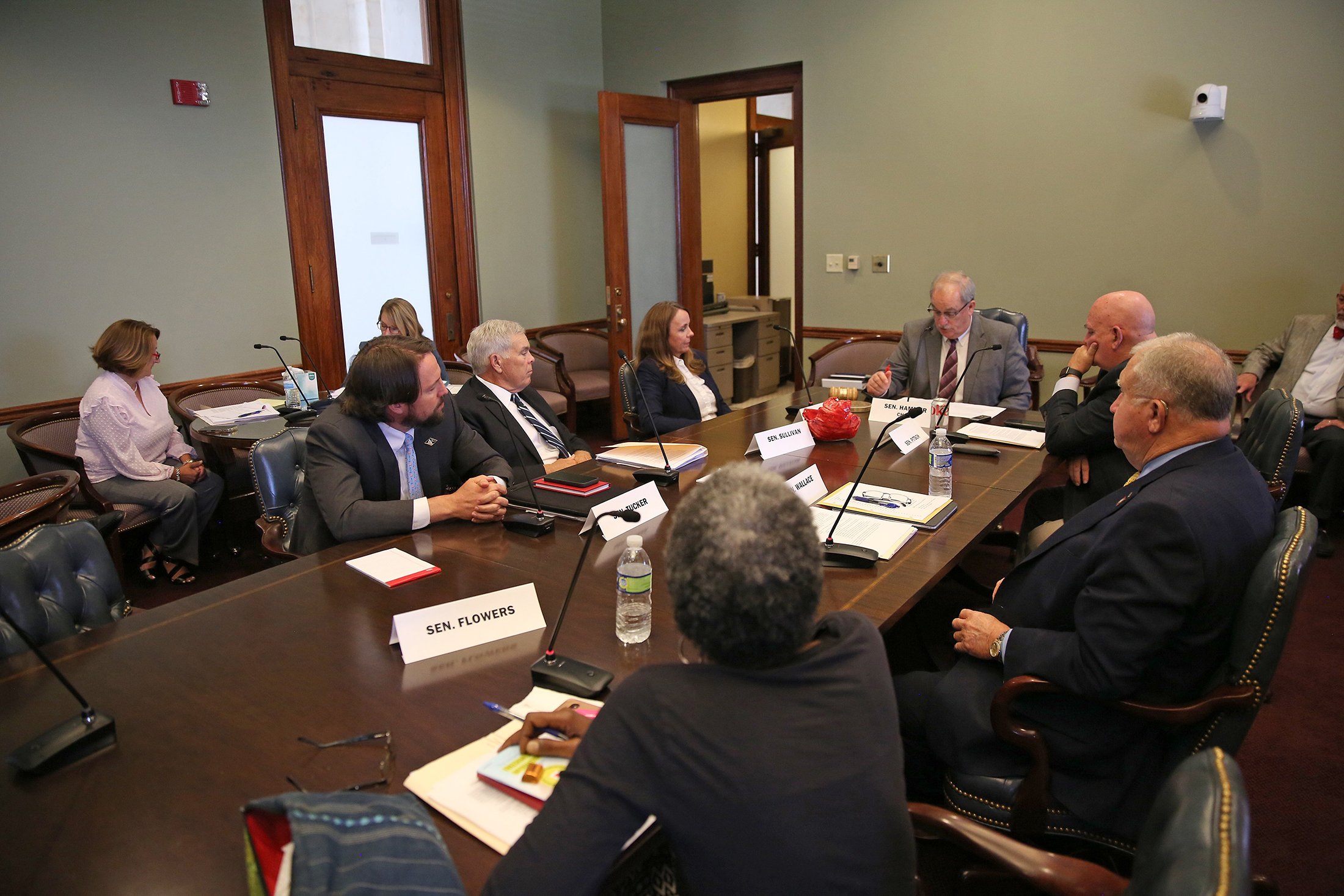 Members of the Senate Ethics Committee hold a meeting Monday at the state Capitol where they found that Sen. Mark Johnson and Sen. Alan Clark violated Senate reimbursement rules. Clark expressed shock at the panel’s recommendations for his punishment. (Arkansas Democrat-Gazette/Colin Murphey)