Rice fields drying up in Italy as drought lingers 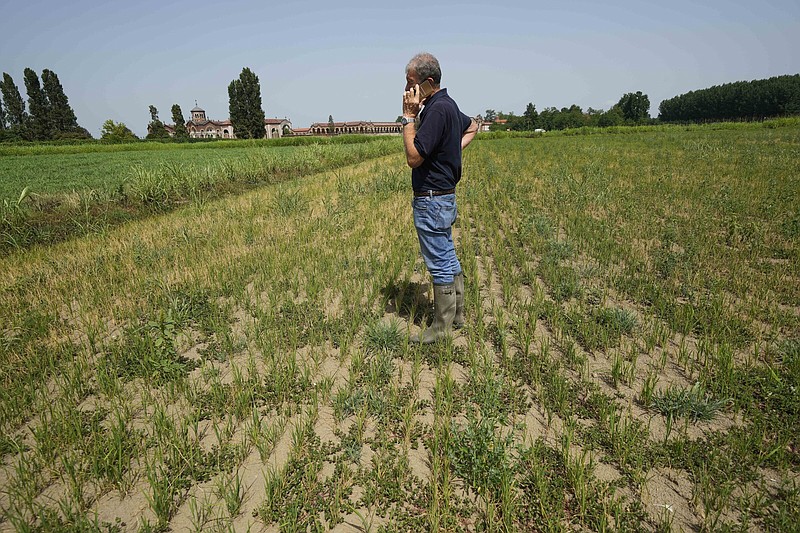 MORTARA, Italy -- The worst drought Italy has faced in 70 years is thirsting paddy fields in the river Po Valley and jeopardizing the harvest of the premium rice used for risotto.

Italy's largest river is turning into a long stretch of sand due to the lack of rain, leaving the Lomellina rice flats -- between the river Po and the Alps -- without the necessary water to flood the paddies.

"Normally this field is supposed to be flooded with 2 to 5 centimeters [0.8 to 2 inches] of water, but now it seems to be on a sandy beach," said rice farmer Giovanni Daghetta, as he walked through the dying rice fields in the town of Mortara. Farmers there have been producing the famed Arborio rice for centuries: The wide grains of this local variety are perfect for absorbing the flavors of risotto dishes.

According to the United Nations Food and Agriculture Organization, drought stress is the most damaging factor for rice, especially in the early stages of its growth. Heat waves, like those repeatedly hitting Italy with peaks of 104 Fahrenheit, can significantly reduce the yield of surviving rice.

"This paddy hasn't been irrigated for two weeks now, and 90% of the plants have already fully dried," said Daghetta. "The remaining 10%, that are still slightly green urgently need to be submerged with water within two or three days." But with more dry days forecast ahead, Daghetta had little hope that would happen.

The lack of rainfall has brought governors of various Italian regions to declare a state of emergency in order to conserve water and to coordinate the management of minimal resources.

The region's main water sources, the rivers Po and Dora Baltea, are eight times lower than the average seasonal levels, according to the West Sesia Irrigation Association, which regulates water distribution through the maze of channels that snake through the rice fields.

As a result of the water shortage, Bondesa was forced to make a few unpopular decisions, recently ruling to stop irrigating poplars, fruit trees and second crops to give priority to rice.

Tensions are starting to rise between upstream and downstream regions along the river basin, between hydroelectric plants and farmers who are all vying for the same dwindling resource. It is feared larger conflicts could be next if rainfall doesn't relieve empty Italian reservoirs soon.

Even Italy's wealthiest city is feeling the effects of drought. The mayor of Milan signed an ordinance last month turning off the spigots of public decorative fountains to save water.

Milan's archbishop, Mario Delpini, made a pilgrimage on Saturday to pray for "the gift of rain." Delpini visited three churches that serve the farming communities on the outskirts of Milan. He recited the rosary and used holy water to bless a field in front of the St. Martin Olearo di Mediglia church.

It seemed his prayers were at least partially heard on last week as Milan and part of northern Italy were temporarily relieved by several scattered showers.

But most areas are continuing to worsen. Among the stretch of sand between the Po and Ticino rivers, a river-bed-turned-beach has attracted local residents looking for a sunbathing spot.

Piero Mercanti, who now frequents the sandy river bed with his partner, has been keeping an eye on receding water levels.

"We stuck some wooden sticks in the ground last Sunday to measure how much the river was withdrawing in one week," he said. On his return a week later, he noted that the river withdrew by an additional 26 steps.

Italy's drought is threatening some $3.1 billion in agriculture, an Italian farm lobby said this week. Italy's confederation of agricultural producers estimates the loss of 30-40% of the seasonal harvest.

While unusual heat and lack of rainfall are to blame for the current crisis, Italy has a notoriously wasteful water infrastructure that national statistics agency estimates loses 42% of drinking water from distribution networks each year, in large part due to old and poorly maintained pipes.

Italy's civil protection agency is gathering information from regions and various national ministries to propose a broader state of emergency for affected regions. Hundreds of towns and cities across the north have already passed various orders calling for responsible water use in a bid to avoid the use of rationing.

Associated Press climate and environmental coverage receives support from several private foundations. The AP is solely responsible for all content.