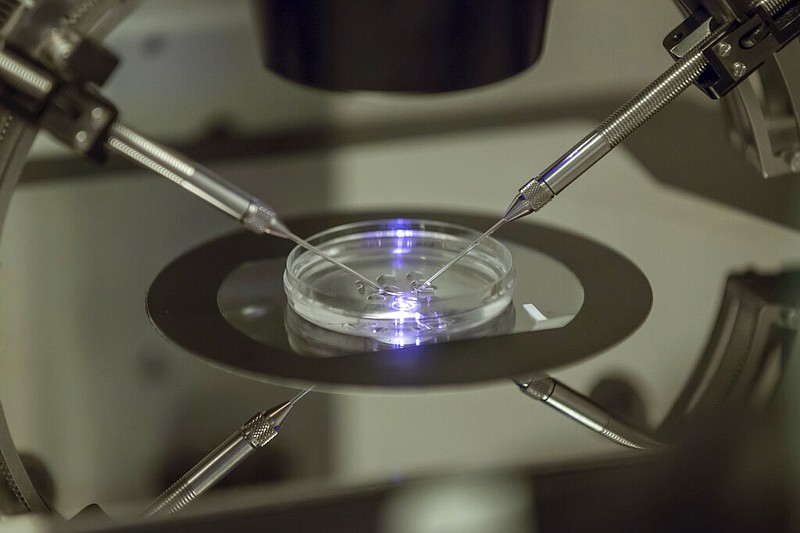 An in vitro fertilization embryologist works on a petri dish at a fertility clinic in London in this Aug. 14, 2013 file photo. In vitro fertilization involves surgically removing eggs from a woman’s ovaries, combining them with sperm in a laboratory, and transferring the days-old embryo to the woman’s uterus. (AP/Sang Tan)

Advocates for in vitro fertilization are concerned that recent abortion bans, including in Arkansas, might soon impact the most widely used form of assisted reproduction.

The greater worry for some in fertility medicine is the future.

"This could be just the tip of the iceberg in terms of state regulations and control of the reproductive process," said Dr. Dean Moutos, the medical director of Arkansas' only IVF clinic, Arkansas Fertility and Gynecology Associates in west Little Rock.

The newly triggered state law, Act 180 of 2019, bars a person from purposely performing or attempting to perform an abortion except in a medical emergency, and it does not include an exception for rape and incest.

Twelve other states, including all six that border Arkansas, also have trigger laws that either went into effect immediately or will this month. An analysis of the 13 trigger laws by the American Society for Reproductive Medicine determined that Utah's trigger law was the only one that could be interpreted to impact assisted reproductive methods such as in vitro fertilization, often called IVF.

In vitro fertilization is the joining of an egg and sperm in a sterile laboratory environment. It's a solution for couples struggling to conceive.

"Where the rubber meets the road for infertility care and abortion laws is what is the legal status of the in vitro fertilized egg," said Sean Tipton, the chief advocacy and policy officer at the American Society for Reproductive Medicine.

Act 180 defines "unborn child" as the state from fertilization to live birth, but it defines abortion as the termination of a pregnancy. It does not mention in vitro fertilization or embryos that are not implanted in the body.

Tipton agreed that Act 180 is "pretty clear in its definition as terminating an established pregnancy, [so] it has no bearing on in vitro fertilization because a fertilized egg in a laboratory does not establish a pregnancy."

State Rep. Robin Lundstrum, R-Elm Springs, said IVF is not at risk of being restricted by the state because it is "totally the opposite end of the spectrum" from abortion.

Lundstrum sponsored a 2019 bill that became law banning abortion in Arkansas after 18 weeks of pregnancy. She also sponsored a 2015 law increasing the waiting period from 24 to 48 hours between a doctor's consultation and an abortion.

The idea that abortion bans could put IVF at any legal risk is "grasping at straws," Lundstrum said.

"It's apples to oranges," she said. "Someone going through IVF is desperately trying to get pregnant."

State Sen. Jason Rapert, R-Conway, the trigger law's sponsor, said in an email that he has a different perspective after participating in a roundtable discussion with other anti-abortion advocates at a national Students for Life conference in Washington, D.C.

Rapert is the founder and president of the National Association of Christian Lawmakers. He said the discarding of fertilized embryos by IVF technicians might come up in state legislatures in the future.

"I predict that many states are going to address the sanctity of life as it relates to human embryos that are utilized in the IVF process," Rapert said.

Moutos said he is unsure "how much thought was given to the effects of this law on ancillary reproductive procedures," but Arkansas Fertility and Gynecology Associates will continue providing fertility treatments as it has done for years.

"The trigger law as it's written does not specifically apply to us, and we're glad about that, but we don't know how that law could be interpreted in the future or if further laws will be passed to regulate reproduction," Moutos said. "We're concerned for our clinic and our patients, but [there's] nothing that's going to immediately impact the care of our patients."

Moutos said Arkansans who do not live in or near Little Rock might often seek IVF in other states. The nearest IVF clinics outside Arkansas are in Memphis, Tenn.; Shreveport, La.; Tulsa, Okla.; Jackson, Miss.; and St. Louis, Mo.

The clinics in Memphis, Shreveport, Tulsa and St. Louis did not respond to requests for comment.

Like in Arkansas, trigger laws in Louisiana, Missouri and Oklahoma went into effect the same day the U.S. Supreme Court overturned Roe.

Mississippi's law was certified June 27 and will go into effect Thursday.

Texas' trigger law was written to go into effect 30 days after the High Court reversal of Roe. The state already had a 1925 law in place that banned abortions after six weeks of pregnancy. A district judge in Houston granted a temporary restraining order barring the enforcement of this law June 28, but the Texas Supreme Court struck down the lower-court ruling on Friday.

Tennessee has its own six-week abortion ban, enacted June 28 after a federal judge lifted an injunction on a law passed in 2020. The state's trigger law is expected to take effect in August and supersede the existing law.

The laws in Mississippi and Idaho are being challenged in court, while the ones in Louisiana and Utah were both temporarily blocked by judges on June 27.

Utah's law defines abortion as "[any] intentional killing or attempted killing of a live unborn child through a medical procedure carried out by a physician or through a substance used under the direction of a physician." This definition might put IVF in a tenuous legal position in Utah, according to the American Society for Reproductive Medicine analysis of the 13 trigger laws.

While state laws do not currently target IVF, the reversal of Roe put all reproductive rights "at the whim of state legislators," prompting concern about the future of IVF nationwide, Tipton said.

"What has happened is there used to be a guaranteed constitutional right that protected people's reproductive autonomy, that protection is gone, so now the door is open for legislatures to stop those rights, whether it's a right to terminate or to create a pregnancy, [or] access contraception," Tipton said.