OPINION | GAME ON: Be any kind of captain you long to be in ‘Star Traders’ 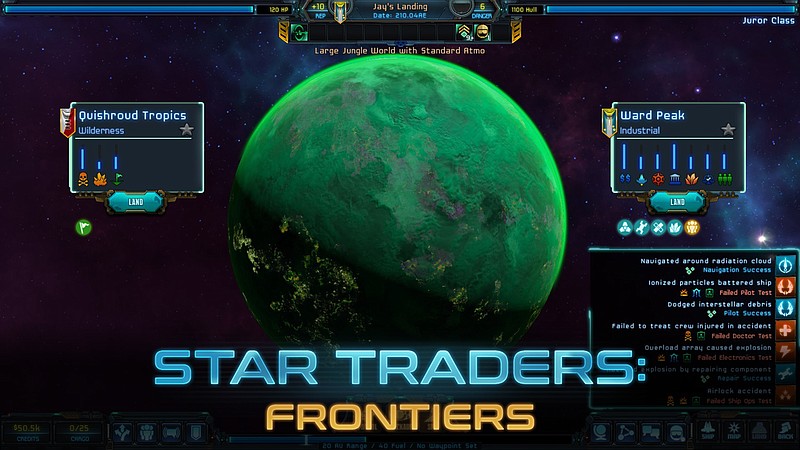 "Star Traders: Frontiers" is a sci-fi captain RPG video game. You are the captain of a starship venturing through a massive open universe. (Photo courtesy of Trese Brothers Games)

I'm not sure how I slept on "Star Traders: Frontiers" for so long, but I'm grateful for the Steam summer sale for bringing it to my attention. If you've always wanted to be an intergalactic captain venturing into the unknown, "Star Traders" is the ship that'll take you closer to your dreams.

This indie title by Trese Brothers game studio is simple enough to jump right into and start playing but also boasts incredibly deep levels of customization and near-infinite replayability.

As your ship's captain, you'll choose whether to become a military captain siding with a particular alliance, or a space pirate, merchant, bounty hunter or many other roles, each with a customizable ship and crew.

At character creation, you're asked to choose a pre-made captain template or customize your own. This is where you'll essentially choose the direction of your game. Each captain has "Attributes," "Skills," "Ship," "Experience" and "Contacts," and must prioritize them. Prioritizing "Experience" makes your captain, officers and crew start at higher levels, while prioritizing "Ship" presents a better starting selection of space vehicles.

Some ships are better for smuggling and evading; some boast larger cargo capacity; and others are superior at combat against other ships. Initially, some ship options are locked, but these can be unlocked through game-play, and players can earn the money to buy new ships in the course of the game.

Once in the game, your captain will have to manage his or her reputation from among a dozen factions and a bevy of personal contacts, navigating not only through space but a complex weave of political intrigue. Factions will plot and war against each other, regardless of whether you take an active role in the conflicts. It really creates a sort of living world experience, where you are part of it rather than having the game revolve solely around you.

[Video not showing up above? Click here to watch » arkansasonline.com/74star/]

With 33 starting jobs available, 45 ship types and more than 350 ship upgrades to choose from, you have full control over how best to approach the sandbox, procedurally generated universe you'll find yourself in.

Want to excel in ship-versus-ship combat? Pick a heavy-duty ship, rip out the cargo holds and passenger cabins and replace them with more weapons, armor and carrier bays, so you can deploy smaller ships to aid you in combat.

Or, build a crew based on personal combat and go with a ship specialized for boarding. During ship-versus-ship combat, charge in close, and you can board the enemy ship, taking four of your best soldiers up against four of their soldiers in turn-based, Darkest Dungeon-style combat. If you're victorious, you can damage their ship and crew, disabling weapons to give yourself the upper hand.

Focusing on personal combat will also come in handy during fights against xenos (aliens), pirates and other enemies found in other situations.

Or perhaps you'll want to align yourself with one particular faction and launch raids against another faction in a different system. You'll be a hero at home and a villain abroad, with each region and faction seeing you based on their relationship to you. Be a menace in one star system, and you'll find no shipyards will repair your vehicle, trade with you or even refuel you. But worry not, you can set up a blockade in their planetary orbit, ransacking travelers and stealing their fuel.

There's a lot of interconnected systems to manage, though. Take a bunch of damage in combat, and your crew will be injured and lose morale, which can lead them to abandon your ship next time you land in a port. Depending on the difficulty level picked (on harder ones your captain can die in combat and get a "game over"), a few bad random encounters can end a run entirely.

You can even avoid combat almost entirely, equipping your ship to flee fights and instead focus your character on managing relationships, trading favors and working as a diplomat between civilizations. Interestingly, despite the name "Star Traders," actually working as a merchant is generally not the exciting part of the game. Who needs cargo holds when you can have more missile launchers?

I also enjoy that the developers seem to really care about their game -- it came out a few years ago, but they continue to make it better, having issued more than 300 updates to the game since release. They've also successfully ported the game to mobile devices, and you get the same experience there as you do on a desktop computer.

There also are no microtransactions or ads of any kind. It's a very player-focused approach, and it shows.

Print Headline: Fight aliens, be a captain in ‘Frontiers’