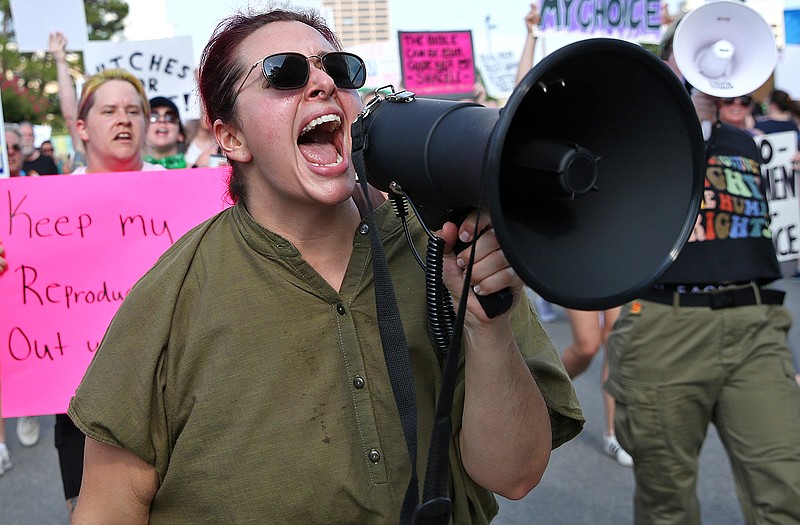 Scores of abortion-rights advocates rallied at the Arkansas Capitol on Monday to protest abortion bans and register voters.

Speakers who took to the Capitol steps lamented the restriction of abortion access after the U.S. Supreme Court reversal of Roe v. Wade less than two weeks ago. While multiple states, including Arkansas, certified laws banning most abortions after the ruling, organizers urged demonstrators to take action by voting, volunteering and boycotting businesses with anti-abortion policies.

"We're only one week out from Roe. We've got a long long road ahead of us so to speak," said Ali Taylor, president at the Arkansas Abortion Support Network.

"But we're not going anywhere," yelled a man among the demonstrators hoisting signs on and around the Capitol steps.

Since the Supreme Court decision, the Arkansas Abortion Support Network and other abortion-rights organizations have seen a flood of donations. Groups have also heard from volunteers offering to help transport and lodge Arkansans seeking out-of-state abortions, said Taylor.

While support groups are still adjusting to changes in abortion regulation and demand, Taylor suspected organizations would need more volunteers to help drive abortion seekers to clinics in other states.

"We're going to need your help to keep these resources up and at some point in the future," she said.

"America is free from the British now. America is equal and powerful and represented on the global stage because they resisted and went to war and they won," she said. "This rally is important. Coming together in truth and power is imperative for revolutionary change."

Citing the long struggle for women's and minority rights in America, Flowers urged demonstrators to show their support for pro-abortion candidates at the ballot box.

"Activate yourself and others to vote for local, state and federal candidates who openly support the unalienable rights of women and girls," she said.

Before rallying around the Capitol steps, demonstrators marched a couple blocks down Capitol Avenue chanting slogans and waving signs that criticized the Supreme Court ruling.

Jessey Chavez, 17, and Abby Bradshaw, 18, joined the demonstration, saying they wanted the freedom to choose whether or not to carry a pregnancy to term.

"What folks need to realize is that politics is war," she said. "Our battleground for democracy is the state Legislature. We're going to win this war."

Tim Blue, who joined the march in support of his wife and daughters, said electing more Democratic candidates to state office would be the first step in restoring abortion access in Arkansas.

"Right now it's in the hands of the states. It has to be changed at the state level initially," he said. "The next step is it needs to be codified nationally and that's done at the ballot box."

A few anti-abortion counterprotesters encircled by State Capitol Police gathered near the Capitol steps during the rally. While demonstrators shouted chants, the protests on both sides remained peaceful.

Later in the evening, some protesters went toward the River Market District. The Little Rock Police Department called in its Special Response Unit, but "they were not utilized," a spokesman said. He added that one person was arrested and charged with disorderly cconduct.

In the days after the Supreme Court ruling, the organization shifted its focus to encouraging the enforcement of Arkansas's ban on most abortions, working with state lawmakers to consider additional abortion regulation and expanding efforts to assist pregnancy help organizations, according to Luke McCoy, a spokesman for the group.

Arkansas law prohibits abortions except in cases where the mother's life is at risk.