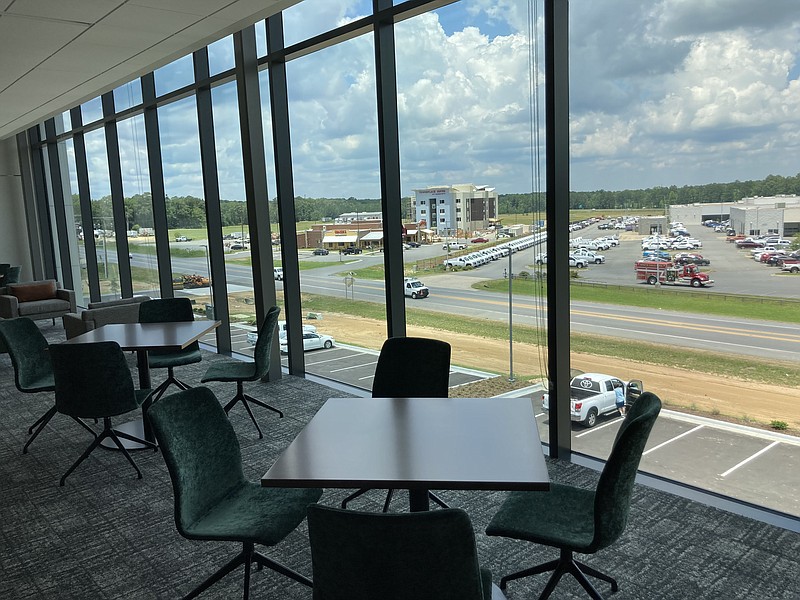 The start of a widening project along Sheridan Road, as seen from Relyance Bank's new headquarters in White Hall, has been delayed until possibly early next year. (Pine Bluff Commercial/Byron Tate)

Because of delays in utility underground cable and pipe locations, the widening work on Sheridan Road to five lanes near Interstate 530 has been bumped back until possibly early next year.

That's the latest word from Andrew "Drew" Hoggard, Arkansas Department of Transportation (ARDOT) District 2 engineer, who is overseeing the project.

A third utility company is slated to start work soon.

Past delays have been caused by weather as well as relocation crews dealing with covid-19, and other changes. For example, a utility may have to be placed lower at an intersection or moved to accommodate a wider section of road than anticipated. Delays are the nature of this business, he said.

It's possible the road widening project will go out to bid this fall, Hoggard said. That will allow road construction companies to compete for the job.

At the earliest, "It will be 2023 before the work is underway," Hoggard said.

The widening of Sheridan Road will extend approximately two miles on either side of Interstate 530, exit 34, and will extend from the intersection of U.S. 270 and Arkansas Highway 365-S to state Highway 104 to Highway 365.

The work will cost the taxpayers an estimated $20 million.

This project will widen the existing two-lane roadway to four lanes with a center turn lane and include the addition of curbs and gutters with storm drains and sidewalks along both sides of the highway.

Once started, the entire project will take approximately two-to-three years to complete.

"This area is one of the most congested areas in the city," said White Hall Mayor Noel Foster.

According to traffic counts, there are about 8,900 vehicles traveling on the three-lane road on the west side of I-530 each day, with about 13,000 traveling on the east side during the same period.

The widening project is expected to alleviate the problem, Foster said.