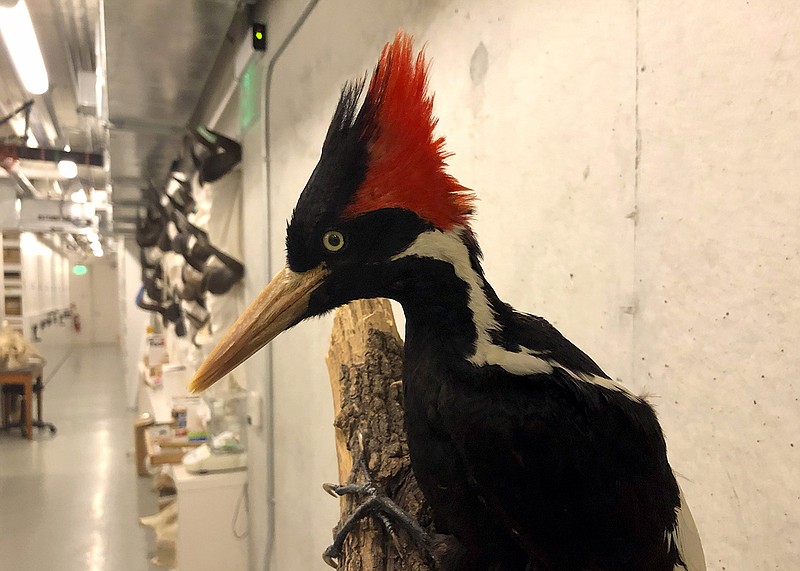 U.S. Fish and Wildlife Service is giving people another month to come forward with any new evidence that the ivory-billed woodpecker still exists. Ornithologists say the woodpecker was last seen in east Arkansas in 2004-05. (AP file photo)

The U.S. Fish and Wildlife Service will take another six months to determine whether the ivory-billed woodpecker is extinct.

And it's giving people another month to come forward with any new evidence that the charismatic bird still exists.

The ivory-billed was once -- and perhaps still is -- America's largest woodpecker. With its prominent beak and a wingspan of 30 inches, it was known as the "Lord God Bird" because people would exclaim "Lord God!" when it swooped down from the sky.

Many ornithologists say the woodpecker was last seen in the Big Woods of east Arkansas in 2004-05. But the last "commonly agreed upon" sighting was in Louisiana in 1944, according to the Fish and Wildlife Service.

Although it had been considered extinct for 60 years -- from 1944 to 2004 -- the ivory-billed woodpecker has remained on the endangered species list since 1967.

On Sept. 30, 2021, the Fish and Wildlife Service proposed removing the ivory-billed woodpecker, along with 22 other species, from the Federal List of Endangered and Threatened Wildlife due to extinction.

A two-month public comment period was held late last year regarding all 23 species.

Because of concern over the proposed delisting of the ivory-billed woodpecker, a public hearing on the bird was held Jan. 26, followed by a one-month extension of the public comment period.

Now, the Fish and Wildlife Service is reopening the comment period for another month and extending its final decision by six months.

"Since the publication of the proposed rule to delist the ivory-billed woodpecker, there has been substantial disagreement regarding the interpretation of the evidence that exists for the ivory-billed woodpecker," according to the rule to be published today. "This situation has led to a significant disagreement regarding whether the species is extinct."

The Sept. 30 proposal was based on the best science available at the time, according to a news release from the Fish and Wildlife Service.

"I congratulate the USFWS for making the right decision to postpone delisting, and I would encourage them to extend the time period," John W. Fitzpatrick, emeritus director of the Cornell Lab of Ornithology, said in an email. "My frank opinion is that they should table the matter entirely for another decade. Significant new information coming in from several active searches adds to the reasonable doubt about this iconic species being entirely gone."

Bobby Harrison, who retired July 1 from his job as associate professor of visual media at Oakwood University in Huntsville, Ala., said he has recently seen an ivory-billed woodpecker.

"My most recent sighting of an ivory-billed woodpecker took place on Oct. 17, 2020, and I managed to videotape the bird as it flew through a swamp forest at an undisclosed location in the southeast United States," Harrison said in his written public comment to the Fish and Wildlife Service. "I was canoeing as the bird first came into view, and I identified it immediately by its style of flight and the position of the black and white on its wings."

Harrison, who has been searching for ivory-billed woodpeckers since he was a teenager, said that sighting lasted 9.8 seconds.

In his public comment, Harrison said he and colleague Tim Gallagher also observed an ivory-billed woodpecker on Bayou DeView in east Arkansas on Feb. 27, 2004.

Fitzpatrick and Gallagher were also two of the 17 co-authors of that Science article.

In a telephone interview, Harrison said he had an additional nine sightings of the ivory-billed woodpecker since 2004. He said eight of those nine sightings were at Bayou DeView in Arkansas.

"I have been told unofficially it's probably the best evidence they've seen," said Harrison. "I am not presenting this as proof because it will not satisfy the skeptics. It's not the 8-by-10 glossy that everybody wants. People don't realize that it is difficult to get that. They don't expect a woodpecker to fly as fast as this bird does. But there is no doubt this is an ivory-bill. ...

"I hope they will just recognize there's evidence that this bird still exists and they will remove it from this proposal and wait at least 10 years before they try it again."

Harrison and Gallagher's initial sighting came after a report from Gene Sparling of Hot Springs that he had seen an ivory-billed woodpecker earlier in February 2004 while kayaking in Bayou DeView, a few miles northwest of Brinkley.

"When we heard kayaker Gene Sparling's description of a likely looking woodpecker in an Arkansas bayou in early 2004, we went there immediately, planning to spend a week exploring the bayou with him," Gallagher wrote in his public comment to the Fish and Wildlife Service. "On our second day, we had an unmistakable sighting of an ivory-billed woodpecker, which flew across the bayou less than 70 feet in front of us. Our sighting launched the subsequent Cornell search, which led to more than a dozen additional sightings and a video."

After the sightings by Gallagher and Harrison, a secret investigation began in the swamp forests of east Arkansas, led by the Cornell lab and The Nature Conservancy.

David Luneau Jr., an associate professor of engineering technology at the University of Arkansas at Little Rock, shot video of what is believed to be an ivory-billed woodpecker in 2004 on Bayou DeView. But the video -- shot from a camera on a cushion on a crate in a canoe -- is blurry, so its validity isn't universally agreed upon by the ivory-billed experts.

Luneau said he wasn't surprised by the Fish and Wildlife Service's announcement on Wednesday.

"I expected the USFWS would hold off with the delisting since they were inundated with sighting reports and evidence," Luneau said in an email. Luneau said he's curious, though, who the "independent observers" will be who determine whether photographic evidence is definitive.

The Fish and Wildlife Service will accept comments received or postmarked on or before Aug. 8. According to the news release, information on how to submit comments is available at www.regulations.gov by searching under docket number FWS-R4-ES-2020-0109.

Comments provided during the initial proposal and the previous reopening do not need to be resubmitted.

The Endangered Species Act of 1973 requires the Service to delist species due to recovery or extinction, allowing for the better allocation of resources for species that remain threatened and endangered.