Owner-operators unsure how to comply with testing rule by Augusta Saraiva and Ngai Yeung Bloomberg News (WPNS) | July 9, 2022 at 1:46 a.m. 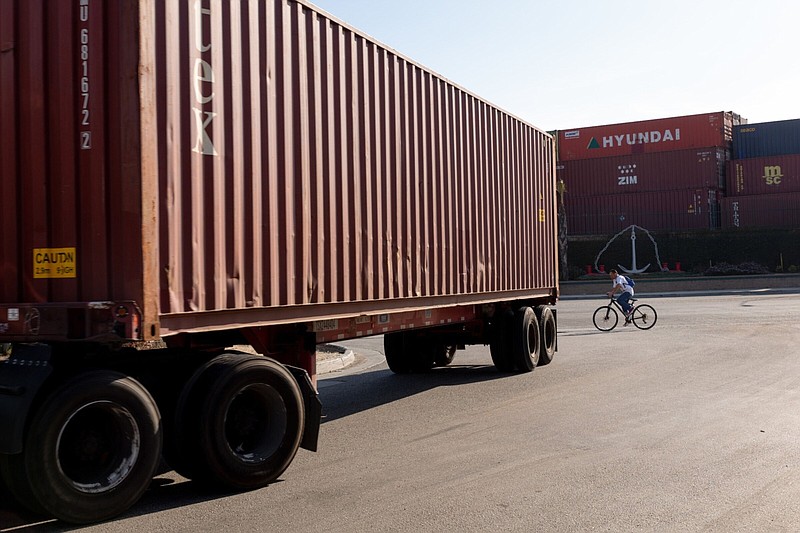 A truck hauling a shipping container passes a bicyclist on a street in the Wilmington neighborhood of Los Angeles. California’s independent truckers now face compliance with state law that requires them to satisfy a three-part test to be considered independent contractors. (Bloomberg News WPNS/Allison Zaucha)

About 70,000 truck owner-operators who form the bedrock of California's transport industry are in limbo as state-level labor rules start applying to them, creating another choke point in stressed U.S. supply chains.

Almost a dozen truckers told Bloomberg News they're unsure how to comply with California's Assembly Bill 5, which requires workers satisfy a three-part test to be considered independent contractors, or else be seen as employees entitled to job benefits. The trucking industry relies on contractors -- who until now have had flexibility to operate on their own terms -- and has fought to be exempt from state regulations for years.

California truck owner-operators must now comply with AB5 after the Supreme Court on June 30 refused to review a case challenging the legislation that sets out the tests for employment-status classification.

The California Trucking Association, which brought that challenge, estimates the law may push thousands of independent truckers off the road while they take the necessary steps to comply with the new regulations.

More than 70% of truckers serving some of the country's largest ports -- including Los Angeles, Long Beach and Oakland -- are owner-operators, and AB5 will govern their relationships with carriers, brokers and shippers in most cases, according to the California Trucking Association.

"We have never gotten any good answers from anyone official in California on how this is supposed to be enforced or how our members can comply," said Norita Taylor, the director of public relations at the Owner-Operator Independent Drivers Association.

The law comes into effect for truckers in the busiest months of the year as retailers stock up on back-to-school and holiday goods. At the same time, dockworkers and railroad workers are currently negotiating contracts with their respective employers. Additional transportation snarls would only worsen pandemic-era supply-chain chaos and add to inflationary pressures, threatening to slow economic growth.

"This denial couldn't have come at a worse time," said Eric Sauer, senior vice president for government affairs at the California Trucking Association. "We're in peak harvest season. We're also in peak construction season. And this is the time for peak holiday imports coming into the ports."

The Port of Long Beach is monitoring the trucking situation as AB5 comes into effect.

"We understand the capacity concerns at this very busy time for the port complex," Deputy Executive Director Noel Hacegaba said.

Meanwhile, the Biden administration is looking forward to more detail and a plan of action from California, a White House official said.

Given the ambiguity on how AB5 will play out, it may force carriers to immediately downsize their contracted owner-operator fleets, or hire former owner-operators as company drivers effective July 7, said Kevin McMaster, vice president of carrier sales at Encinitas, Calif.-based Flock Freight.

"This would cause a ripple effect in the industry, pushing many drivers who don't want to apply for their own authority to lease out of state, likely in Arizona or Nevada, and even force some into retirement due to increased market pressures," he said. "There will likely be pressure added on capacity in California that could exacerbate an already tough environment where drivers are at a premium."

Matt Schrap, chief executive officer of the Long Beach, Calif.-based Harbor Trucking Association, is projecting some level of capacity loss as drivers exit the marketplace because they don't want to be employees, nor do they want to obtain their own operating authority.

The cost to transition from an owner-operator model may reach $20,000 annually as truckers file for the appropriate licenses and pay additional fees and insurance, Schrap said.

The best advice for independent drivers now is to "find a lawyer," he said.

California passed the AB5 law in 2019, aiming at gig-economy giants including Uber, Lyft and DoorDash.

But these companies won exemption, along with other professionals, including musicians, freelance writers and architects.

The timing of the decision is "nothing new," said former Assemblywoman Lorena Gonzalez, the Democrat who proposed the bill.

"They've known for the last two and a half years that it was equally possible that this injunction would not hold. This is not a shock."

Still, some see in the law an opportunity to address longstanding pitfalls within the industry.

The International Brotherhood of Teamsters, which represents about 1.2 million U.S. and Canada workers mainly in trucking, says the law will avoid misclassification and will guarantee independent contractors are paid fair wages, benefits and employee-related fees.

"Over the last decade, the California Labor Commissioner found misclassification is rampant at our ports," Randy Cammack, president of Teamsters Joint Council 42, said in a statement. "The race to the bottom in trucking is going to end."

Since 2012, the California Labor Commissioner's Office issued about 500 decisions finding that port trucking companies had misclassified drivers, ordering them to pay over $50 million to these workers.

"We'll blame AB5 for everything that really is a result of decades of deregulation in the trucking industry," Gonzalez said. "This is a constant bogeyman."

Truckers in other states are looking closely at California as an example of what might come next for them, according to the CTA's Sauer. "A lot of the laws and regulations that get adopted in California blow east," he said.

Home to the second-largest port complex in the U.S., New York and New Jersey failed to pass similar bills during the pandemic, but both states have since taken steps to regulate independent contractors. Other states including Washington and Massachusetts have also proposed labor-regulation bills.

It's "sad to see people don't understand the severity of the situation," said Edisson Villacis, president of the Elizabeth, New Jersey-based Port Driver Association. If anything, all the confusion in California is a cautionary tale. "It's a chain reaction and nobody is paying any attention."