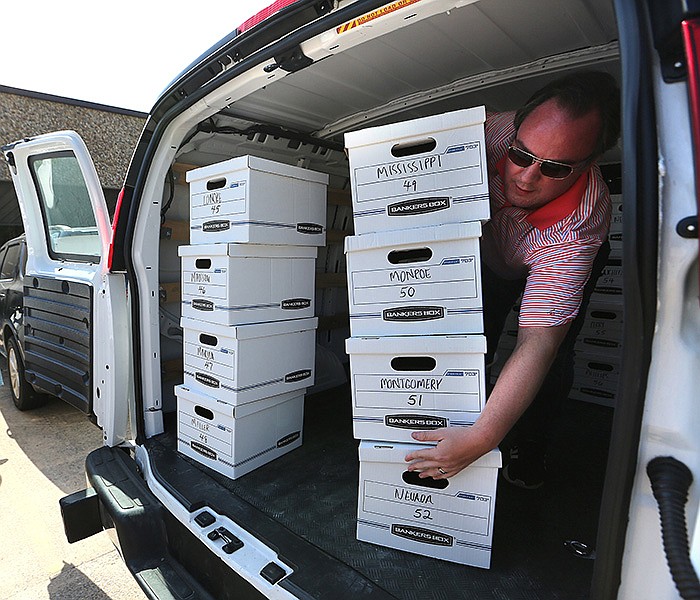 John Burris with Fair Play for Arkansas unloads petitions at the Secretary of State’s office on Friday in Little Rock. (Arkansas Democrat-Gazette/Thomas Metthe)

Proponents of a proposed constitutional amendment that would remove Pope County as a site for a casino said they turned in about 103,000 signatures of registered voters Friday in their attempt to qualify their proposed measure for the Nov. 8 general election ballot.

James Knight, president of the Fair Play for Arkansas 2022 committee, certified in an affidavit that the committee filed 20,913 petition parts containing 103,096 signatures of registered voters to the secretary of state's office late Friday afternoon.

To qualify a proposed constitutional amendment for the ballot, a ballot committee is required to gather signatures of at least 89,151 valid registered voters, or 10% of the votes cast for governor in the 2018 general election, and at least the required minimum number of signatures from each of at least 15 counties.

Hans Stiritz, a spokesman for the Fair Play for Arkansas 2022 committee, said "obviously we are thrilled with the results."

He said committee officials don't have a good sense of what the secretary of state's office will determine on the validity rate of the signatures, "but we are optimistic that we'll at least get enough for the cure [period]."

Stiritz said canvassers will continue to collect signatures in the coming weeks, in anticipation of multiple legal challenges.

But David Couch, an attorney representing the Cherokee Nation Businesses and the Arkansas Tourism Alliance, said he doubts that the Fair Play for Arkansas 2022 committee would qualify for the 30-day cure period to collect more signatures of registered voters.

"Considering the historical validity rate of petitions in the state of Arkansas, as well as the population of registered voters ... they will not meet the minimum numbers required to initiate the petitions," Couch said in a written statement.

"Furthermore, a mountain of evidence exists to challenge significant improprieties pertaining to Fair Play's signature-gathering efforts, including gross misrepresentation by canvassers of the ballot petition's purpose, employment of persons with criminal backgrounds and improper notarization of petitions," he said.

"We remain optimistic and will continue the fight to keep the constitutional amendment voters approved in 2018 intact, keeping billions of dollars in tax revenue and thousands of good-paying jobs in the state of Arkansas," Couch said.

Stiritz said in a news release that the Fair Play for Arkansas 2022 committee has called on the state to investigate the Arkansas Tourism Alliance committee for potential petition fraud.

"Our canvassers have faced assault, physical intimidation, harassment and other threats," he said.

The Choctaw Nation of Oklahoma contributed $2.1 million to the Fair Play for Arkansas 2022 committee, according to the committee's report.

Through the end of May, the Arkansas Tourism Alliance ballot committee reported raising $1.28 million and spending $1.1 million, leaving a balance of $171,036.64 on May 31.

The Oklahoma-based Cherokee Nation Businesses contributed $1.28 million to the Arkansas Tourism Alliance committee, according to the committee's report.

The licenses are authorized for expanding gambling operations at Oaklawn Racing and Gaming in Hot Springs and Southland Casino Racing in West Memphis, and for casinos in Jefferson and Pope counties with the endorsement of local officials. The amendment also opened the door for sports betting at the casinos. Under a 2005 state law, Oaklawn and Southland had already operated electronic games of skill.

The Pope County casino license has long been a source of turmoil for the county and the state, resulting in numerous court cases.

"Our best recourse was to get Pope County pulled out of the amendment, and that's what this is about," Stiritz said.

A casino in Pope County has potentially huge negative social and economic impacts for families and the community, he said.

But Couch said "that's not the issue."

"I don't think the effects of the casino in Garland County or Crittenden County or Jefferson County have been any different than when they didn't have casinos there," he said.

"What it is really about is that the Choctaw are funding this campaign [to remove Pope County as a casino site] and the Choctaw have a casino in Pocola, Oklahoma ... and the Choctaw applied to get the license [in Pope County] and they didn't get it ... so it is all about keeping the casino from being in Russellville," Couch said.

Cherokee Nation Businesses continue to acquire land and will proceed with construction upon receiving the necessary permits and once all outstanding litigation is resolved, she said.

"On Monday, July 11, we will put forth the large-scale development plan to the Russellville Planning Commission for review and anticipated approval," Burum said in a written statement.

Friday was the deadline for ballot committees to turn in signatures of registered voters to the secretary of state's office to qualify their proposed ballot measures for the November general election ballot.

Earlier Friday, the Responsible Growth Arkansas committee turned in what its supporters said were about 192,000 signatures of registered voters in its attempt to qualify its proposed constitutional amendment for the ballot.

The proposed amendment would allow the state to issue adult-use cannabis cultivation and dispensary licenses to businesses that already hold licenses under the state's medical marijuana program, followed by an additional 40 licenses chosen by a lottery.

Three proposed constitutional amendments are already set to be on the general election ballot after the Republican-dominated Legislature in the 2021 regular session referred three proposals to voters.

One of the proposed constitutional amendments on the ballot is House Joint Resolution 1005 by Rep. David Ray, R-Maumelle, which would require a 60% vote of voters rather than a majority vote for proposed ballot measures.

A second proposed constitutional amendment on the ballot is Senate Joint Resolution 10 by Sen. Breanne Davis, R-Russellville, which would permit the General Assembly to convene in an extraordinary session by a joint written proclamation of the speaker of House and the Senate president pro tempore or by the submission of the signatures of two thirds of the members of the 35-member Senate and 100-member House of Representatives.

Lawmakers would be required to state the reason for the special session, and once that purpose is accomplished, the session could be extended by up to 15 days by a two-thirds majority of both chambers.

Under current law, only the governor can call a special session and the governor sets the agenda for the session.

The third proposed constitutional amendment on the ballot is Senate Joint Resolution 14 by Sen. Jason Rapert, R-Conway, which would prohibit the government from burdening a person's freedom of religion unless the government can demonstrate that it furthers a compelling government interest and is the least restrictive means of furthering that interest.