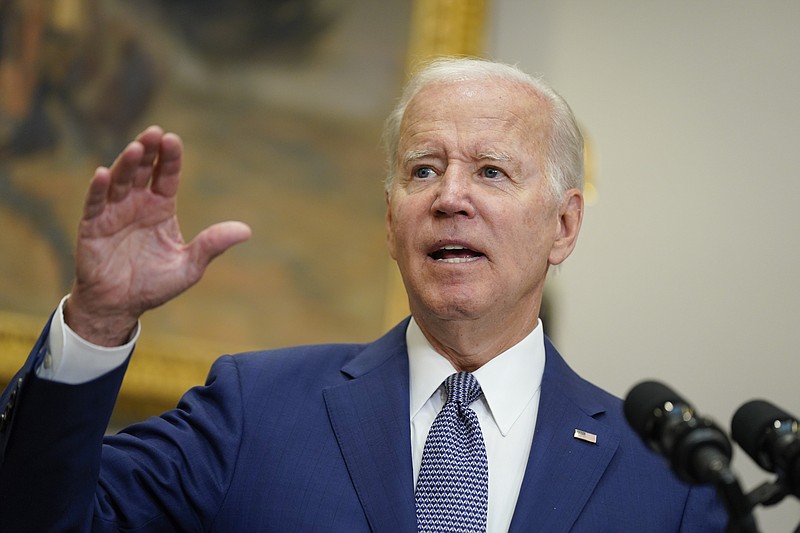 President Joe Biden acknowledged the limitations of his office and called on voters to elect lawmakers who can pass a national law. (AP/Evan Vucci)

WASHINGTON -- Under pressure to do more to respond to the Supreme Court's decision to overturn Roe v. Wade, President Joe Biden issued an executive order Friday designed to ensure access to abortion medication and emergency contraception while preparing for legal fights to come.

The actions Biden outlined are intended to head off some potential penalties that women seeking abortion may face after the ruling, but his order cannot restore access to abortion in the more than a dozen states where strict limits or total bans have gone into effect. About a dozen more states are set to impose additional restrictions.

Biden acknowledged the limitations facing his office, saying it would require an act of Congress to restore nationwide access to the way it was before the June 24 decision.

"The fastest way to restore Roe is to pass a national law," Biden said. "The challenge is go out and vote. For God's sake, there is an election in November!"

Biden's action formalized instructions to the departments of Justice and Health and Human Services to push back on efforts to limit the ability of women to access federally approved abortion medication or to travel across state lines to access clinical abortion services. He was joined by Vice President Kamala Harris, Health and Human Services Secretary Xavier Becerra and Deputy Attorney General Lisa Monaco in the Roosevelt Room as he signed the order.

His executive order also directs agencies to work to educate medical providers and insurers about how and when they are required to share privileged patient information with authorities -- an effort to protect women who seek or obtain abortion services. He is also asking the Federal Trade Commission to take steps to protect the privacy of those seeking information about reproductive care online and establish a task force to coordinate federal efforts to safeguard access to abortion.

Biden is also directing his staff to line up volunteer lawyers to provide women and providers with pro bono legal assistance to help them navigate new state restrictions.

Since the decision, Biden has stressed that his ability to protect abortion rights by executive action is limited without congressional action, and stressed that Democrats do not have the votes in the current Congress to do so.

"We need two additional pro-choice senators and a pro-choice House to codify Roe," he said. "Your vote can make that a reality."

Biden for the first time last week announced his support for changing Senate rules to allow a measure to restore nationwide access to abortion to pass by simple majority, rather than the usual 60-vote threshold required to end a filibuster. However, at least two Democratic lawmakers have made clear they won't support changing Senate rules.

He predicted that women would turn out in "record numbers" in frustration over the court's decision, and said he expected "millions and millions of men will be taking up the fight beside them."

Biden himself acknowledged the limits of his executive powers as he railed against the Dobbs v. Jackson Women's Health Organization ruling, calling it "the Supreme Court's terrible, extreme and, I think, so totally wrongheaded decision." He said the court's majority is "playing fast and loose with the facts" by misrepresenting the history of abortion rights in America.

"What we're witnessing wasn't a constitutional judgment," Biden said. "It was an exercise in raw political power."

He spoke emotionally of a 10-year-old Ohio girl reported to have been forced to travel out of state to terminate a pregnancy after being raped, noting that some states have instituted abortion bans that don't have exceptions for cases of rape or incest.

Biden added that in the November congressional elections, "The choice we face as a nation is between the mainstream or the extreme."

His directions to the Justice and Health and Human Services departments push the agencies to fight in court to protect women, but the order conveys no guarantees that the judicial system will take their side against potential prosecution by states that have moved to outlaw abortion.

Derrick Johnson, president of the NAACP, highlighted the number of Black and poor women who lack access to abortion and called Biden's actions "a good start."

NARAL Pro-Choice America President Mini Timmaraju said the executive order "is an important first step in restoring the rights taken from millions of Americans by the Supreme Court."

But Lawrence Gostin, who runs the O'Neill Institute for National and Global Health at Georgetown Law, described Biden's plans as "underwhelming."

"There's nothing that I saw that would affect the lives of ordinary poor women living in red states," he said.

Gostin encouraged Biden to take a more forceful approach toward ensuring access to medication abortion across the country and said Medicaid should consider covering transportation to other states for the purposes of getting abortions.

"I want to be hopeful, y'all. I really do. I hope this is a first step, before BOLD action," Ghazaleh Moayedi, an abortion provider who has worked in Texas and Oklahoma, wrote in a lengthy Twitter thread. "My community is suffering. We needed help 10 months ago. We are pleading that the administration we voted for, protect our human rights."

"You need to be willing to take some risks -- even if the anticipation is it might not work," Andrea Miller, president of the National Institute for Reproductive Health, said before the announcement. "Because we are facing an immediate crisis."

Some Democrats have urged the president to declare a national health emergency, which they say would give the government more authority to guarantee access to abortion pills, for example. Others have questioned the effectiveness of such a move and noted it would face legal challenges.

Chiquita Brooks-LaSure, the administrator of the Centers for Medicare and Medicaid Services, recently told the AP that the agency had been looking at whether Medicaid could cover travel for abortions, but acknowledged that "Medicaid's coverage of abortion is extremely limited."

Jeanne Mancini, president of March for Life, called it "tragic that this administration is using its power to push for more and more painful abortions which harm women and take innocent lives."

She added, "Our nation today faces significant challenges; not enough abortion is not one of them."

She added, "The president's new order is a monumental misuse of resources that could instead be channeled toward actually helping pregnant mothers who need support so that they don't feel like abortion is their only choice."

Biden's move was the latest scramble to protect the data privacy of those contemplating or seeking abortion, as regulators and lawmakers reckon with the aftermath of the Supreme Court ruling.

Privacy experts say women could be vulnerable if their personal data is used to surveil pregnancies and shared with police or sold to vigilantes. Online searches, location data, text messages and emails, and even apps that track periods could be used to prosecute people who seek an abortion -- or medical care for a miscarriage -- as well as those who assist them, experts say.

Privacy advocates are watching for possible new moves by law enforcement agencies in affected states -- serving subpoenas, for example, on tech companies such as Google, Apple, Bing, Facebook's Messenger and WhatsApp, services like Uber and Lyft, and internet service providers including AT&T, Verizon, T-Mobile and Comcast. They say local prosecutors may go before sympathetic judges to obtain search warrants for users' data.

Biden asked the chair of the commission to consider steps to protect the privacy of consumers who seek information about reproductive health services. Health and Human Services will also consider additional actions to prevent information about patients from being disclosed.

Biden is also establishing an interagency Task Force on Reproductive Health Care Access, which will coordinate throughout the government on other potential policies.

Conservatives said Biden was willfully misstating and exaggerating the impact of the court's decision. Women's medical privacy rights, for example, are already protected by law, they said.

Last month, four Democratic lawmakers asked the FTC to investigate Apple and Google over allegations they deceived millions of mobile phone users by enabling the collection and sale of their personal data to third parties.

Information for this article was contributed by Seung Min Kim, Zeke Miller, Chris Megerian, Aamer Madhani, Marcy Gordon and Hillary Powell of The Associated Press, by Michael D. Shear and Sheryl Gay Stolberg of The New York Times and by Matt Viser and Caroline Kitchener of The Washington Post. 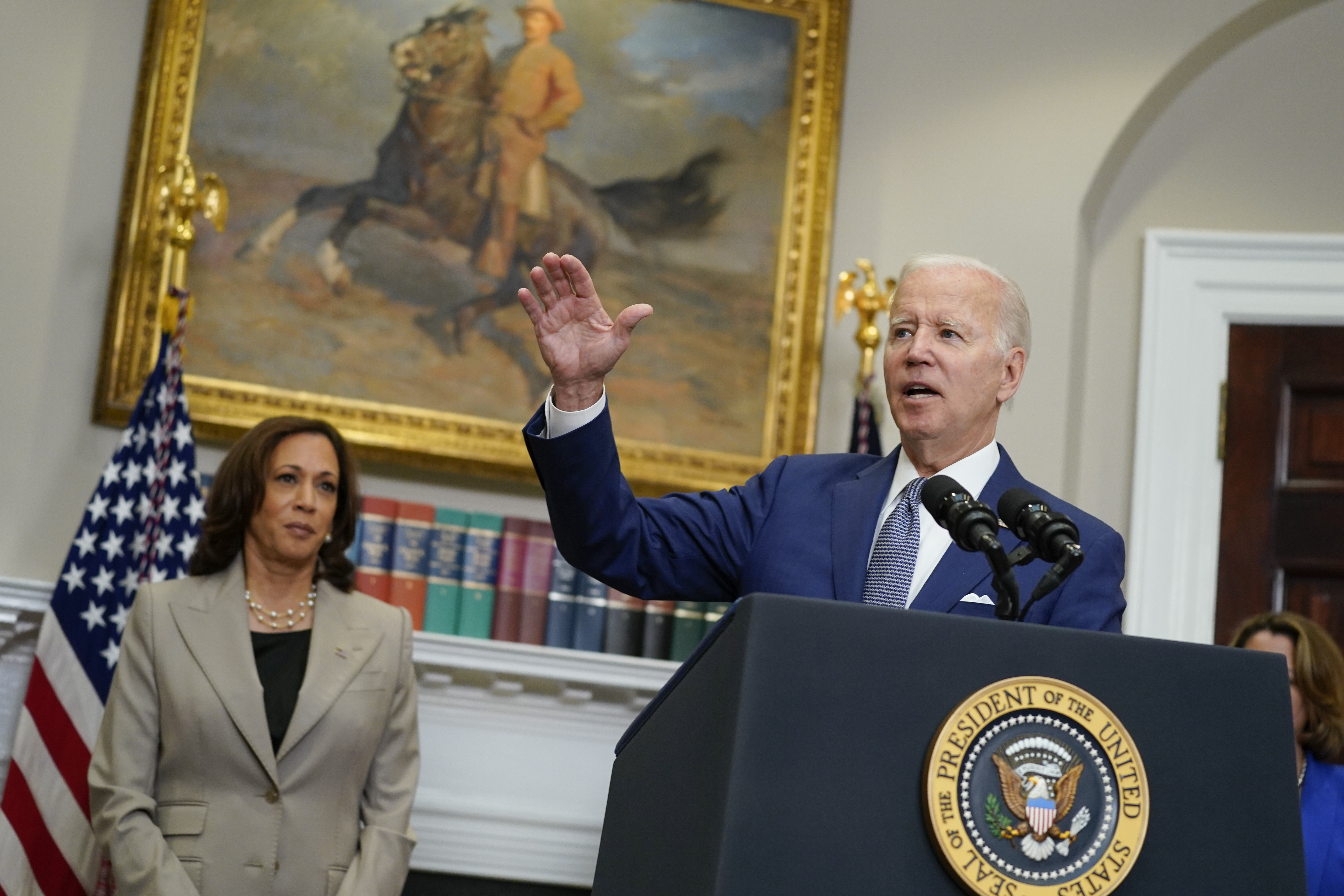 President Joe Biden speaks about abortion access during an event in the Roosevelt Room of the White House, Friday, July 8, 2022, in Washington. Vice President Kamala Harris looks on at left. (AP Photo/Evan Vucci) 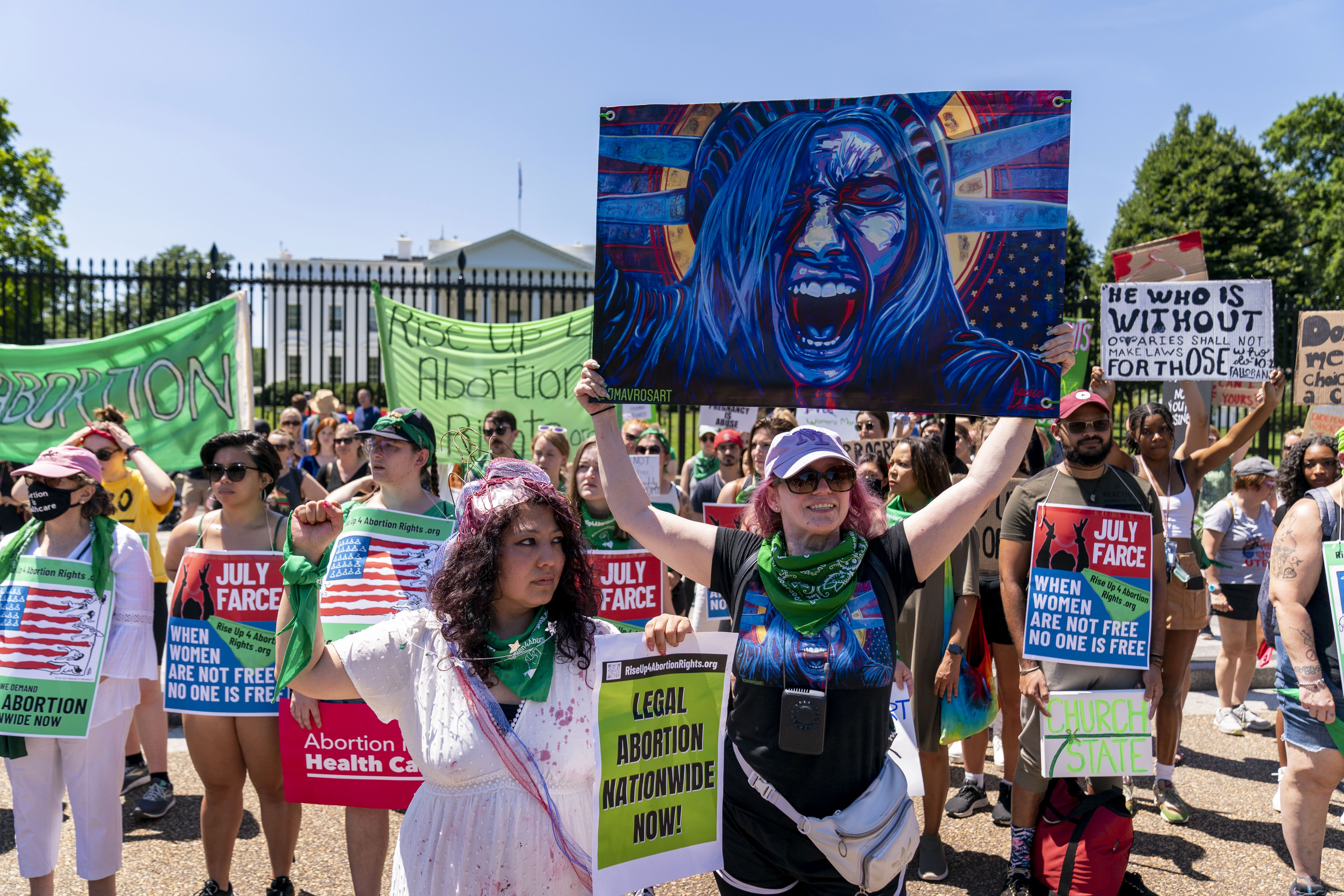 People participate in an abortion-rights rally at Lafayette Park in front of the White House in Washington, Monday, July 4, 2022. (AP Photo/Andrew Harnik) 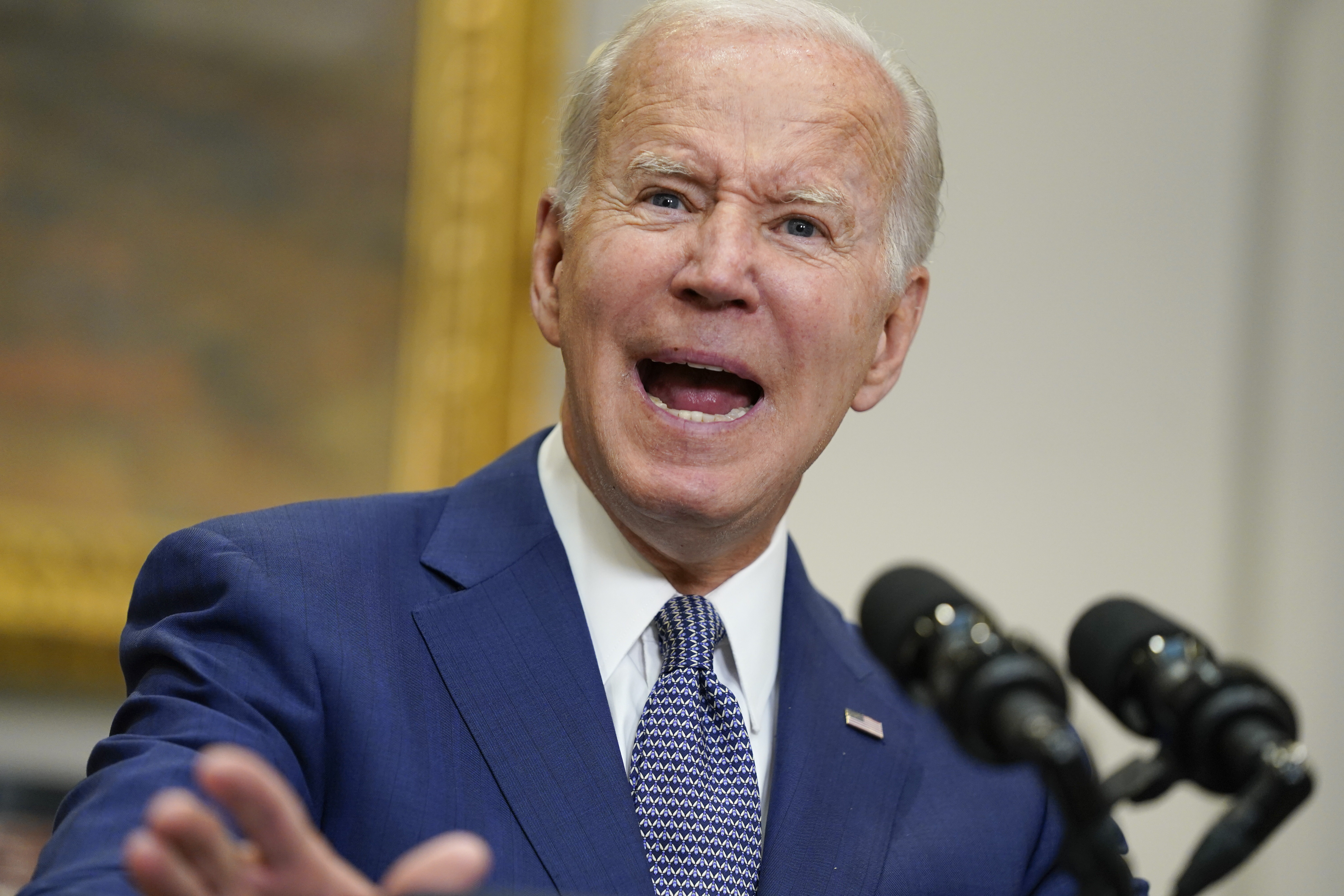 President Joe Biden speaks about abortion access during an event in the Roosevelt Room of the White House, Friday, July 8, 2022, in Washington. (AP Photo/Evan Vucci) 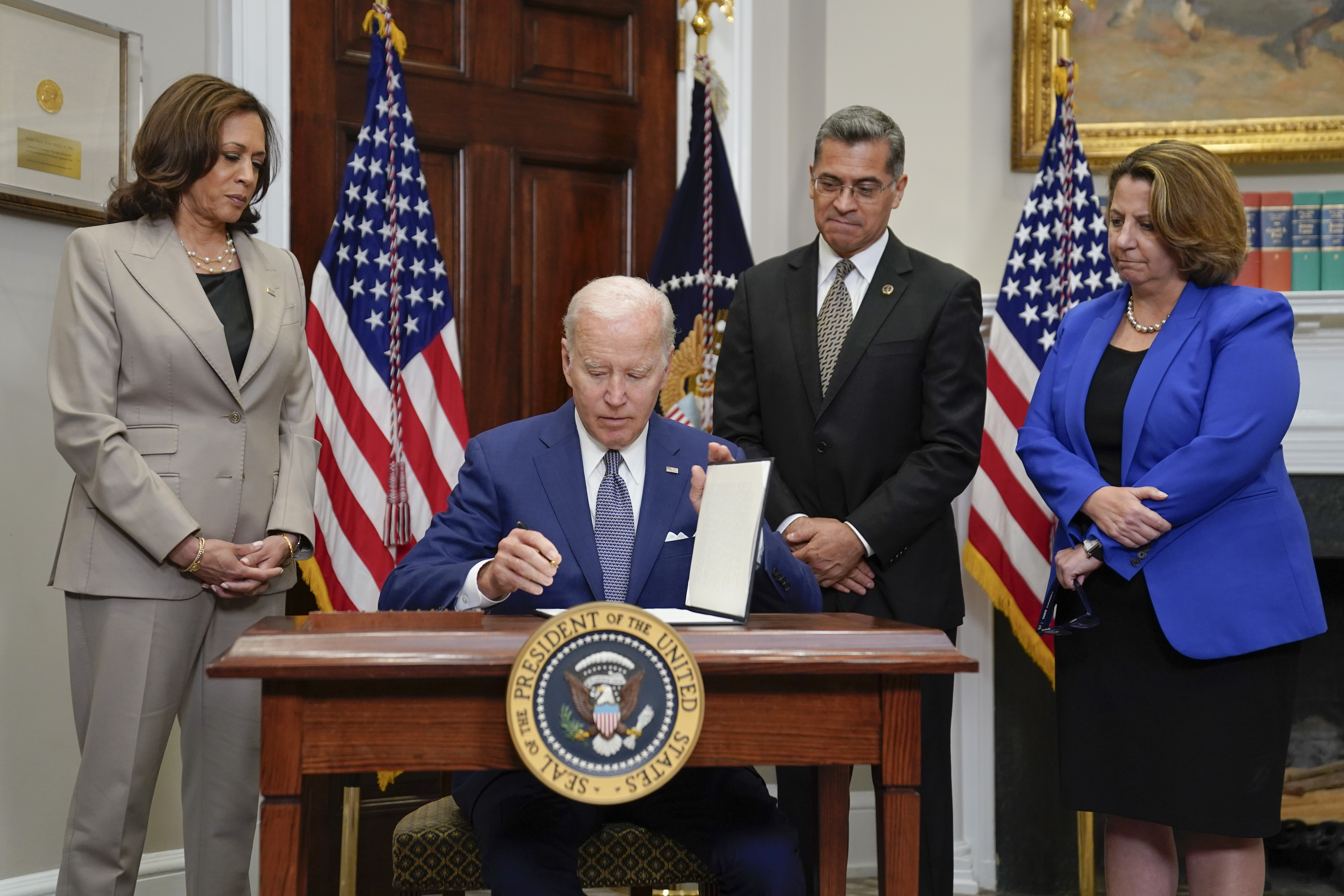 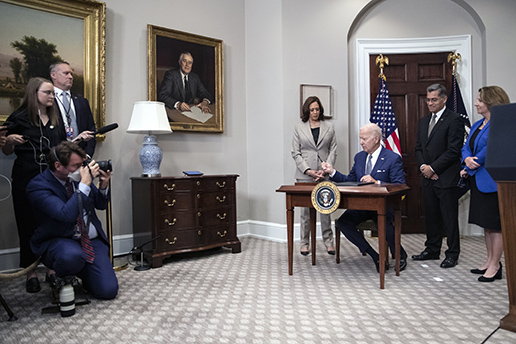