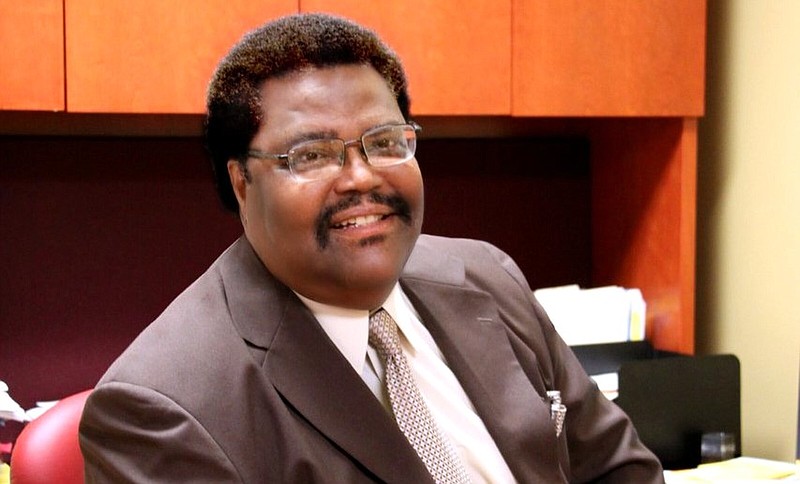 Michael Bates worked in the UAPB Department of Music for 41 years, retiring in 2018. (Special to The Commercial/University of Arkansas at Pine Bluff)

The University of Arkansas at Pine Bluff Vesper Choir was a nationally known group when Michael Bates was appointed its director in 1999. Under his leadership, the choir built an international profile, performing in Spain and Italy as well as 23 states.

"Dr. Bates was a choir director extraordinaire," UAPB Chancellor Laurence B. Alexander said. "For decades, he devoted himself to preparing students for the highest level of achievement in performances by the Vesper Choir. Dr. Bates seriously wanted his students in the choir to have an international experience as well. So, he assumed the responsibility of raising funds and making plans to take the choir on trips abroad."

Bates, who spent 41 years in the school's music department until his 2018 retirement, has died. UAPB did not announce his age or cause or death in a Friday news release.

Bates helped the Vesper Choir raise more than $1 million under his leadership and earned director emeritus status upon his retirement, according to the university.

"While Dr. Bates was best known for directing the choir, we also experienced his gentle and caring style as a professor, music department chair and president of the Faculty and Staff Senate," Alexander said. "He had a tremendous influence on the entire UAPB community, the local community, the state and beyond."

Bates took over the Vesper Choir after the January 1999 death of Shelton McGee, who had led the group for 40 years. The choir has performed on radio and on television and taken the stages in Vatican City; Rome; Washington, D.C.; and New York, among other locations, according to a UAPB webpage.

"The UAPB choir was to UAPB what Razorback football is to the [University of Arkansas] Fayetteville campus," said Bill Fox, former choral director at Pine Bluff First United Methodist Church and former executive director of the Pine Bluff Symphony Orchestra. "That is the name for which they were known. Michael Bates, in my opinion, put UAPB music on the map. Shelton McGee left him a good foundation, but Michael Bates took the ball and ran with it and made one terrific name for himself, but that wasn't what he was after. He worked with these kids. He taught them a lot they didn't know and wouldn't have known if it were not for him."

Bates built a first-rate program at UAPB and a choir that "always sang beautifully," said Kent Skinner, the recently retired University of Arkansas at Monticello choral director who worked with Bates in joint performances of Handel's "Messiah" between the choirs.

"I can remember being very impressed, how well they responded, they were attentive, took what I said to heart and did whatever I asked," Skinner said. "I came to their performance at UAPB, and it was first-rate as well. I can always remember that."

Former Dollarway High School choir and band director Vickie Liddell said Bates' students thought so much of him, he wanted to make sure the Vesper Choir was left in good hands when he retired. Liddell's nephew, Jerron Liddell, now directs the Vesper Choir.

"His ability to produce quality music and his choirs -- the "Messiah," it was awesome -- his relationship with his students, his recruiting ability and I guess everything about him musically ... he was so precise at his craft," Vickie Liddell said. "He's a great loss in the city."

According to his Facebook profile, Bates was from Rockford, Ill., and studied at Bradley University, the University of Illinois and the University of Memphis. He began working at UAPB on Aug. 15, 1977, as an assistant professor in the Department of Music, the university confirmed, and taught courses in music history, music theory and music appreciation.

"Dr. Bates was one of the most amazing piano players I've ever seen," Jackson said. "In regard to Pine Bluff, it's so many vocalists and piano players he's touched. I don't know how to put it in words. He's touched a bunch of musicians and made them a lot better. He could cause musicians to come up another level."

"Doc was an amazing musician, director and overall person," he said. "I am grateful to have called him my mentor and friend. I don't believe that most people truly understand how much of a family the Vesper Choir is and continues to be, even across four generations of leadership. As families do, we will pull together, support each other and remember and celebrate a man who has given so much of himself to so many. Doc's legacy will continue to live through each of us."

The UAPB Vesper Choir, under the direction of Michael Bates, toured Italy in 2006. (Special to The Commercial/University of Arkansas at Pine Bluff)