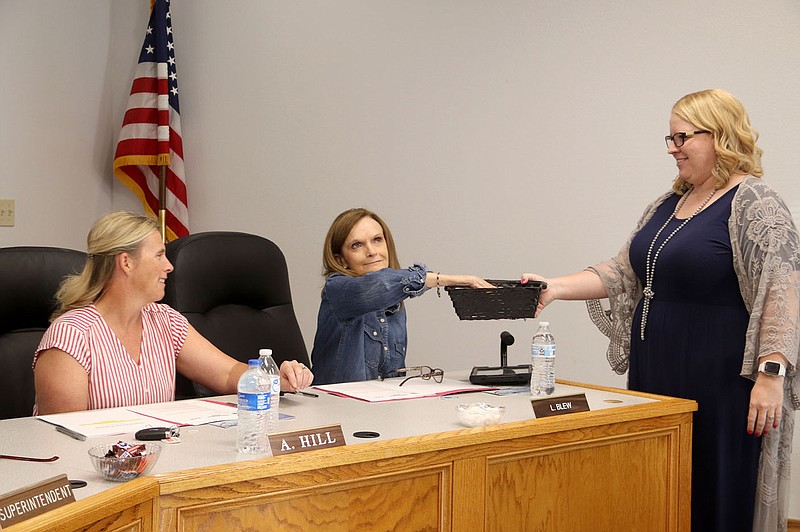 Farmington School Board member Lori Blew draws a piece of paper to decide her current term length from Kim Williamson, who serves in the administration office in human resources and as assistant to the superintendent. Blew will serve a five-year term. Board member Amy Hill (left) drew a four-year term. (NWA Democrat-Gazette/Lynn Kutter)

FARMINGTON -- All five Farmington school campuses will have new security cameras next year that will record around the clock, have additional storage capacity and facial recognition capabilities and be much easier for staff to use, according to school officials.

The Farmington School Board approved on June 27 a recommendation from Jarod Morrison, director of technology and maintenance, and Superintendent Jon Laffoon for a five-year contract for $404,145 with GHA Technologies Inc. of Phoenix for 180 Verkada cameras and 16 environmental sensors.

Morrison said the district will use its federal covid money to make a $100,000 down payment on the contract and pay off the balance over five years with 0% financing, about $60,000 per year. At the end of the period, the district will own the cameras and sensors.

The new system will be web-based, and all recordings will be stored online in the cloud.

"We wanted to use them five years ago but didn't because of the cost," Morrison said.

The cameras with the current system only start recording when they sense motion and the cameras do not always record an entire incident, Morrison said. The current system has limited storage, uses the district's servers and has had many problems, Morrison told board members.

The contract with GHA Technologies shows the district will purchase 74 outdoor cameras and 106 indoor cameras. The equipment will have a 10-year warranty.

Morrison said the environmental sensors will detect vaping and smoking and some of these will be placed inside the bathrooms at the junior high and high school. The sensors also will monitor changes in physical spaces and will measure air quality, temperature, humidity, motion and noise.

As an example of how the new system will help the district, Morrison said staff can search for a specific person or a vehicle and the system will show where that person or vehicle shows up on all the cameras. The new system also will enable staff to respond quickly to incidents or situations, he added.

The district will be able to add cameras in the future or move the cameras around as needed, according to Morrison.

"The quick access to what's going on is invaluable," Hill said. "You can't put a dollar amount on that."

Board members drew lots to determine term lengths for their current term at the outset of the meeting. With the May 24 school election, the School Board changed from an at-large board to a board with members elected by zone.

Lots for term lengths were drawn so that only one position is up for election each year. In subsequent elections, candidates will run for five-year terms.

The board voted to retain Warren as board president for the next year and voted for Hill as vice president and Blew as secretary.

Laffoon said school officials are discussing additional officers, but no decisions have been made.

It also approved a memorandum of understanding with the Arkansas River Educational Service Cooperative to provide a virtual school for the next school year for three students for $2,000 per student. Laffoon said Northwest Arkansas Educational Service is not offering a virtual program for the 2022-23 school year. Three students in kindergarten-sixth grade want to attend school virtually next year, instead of in person, Laffoon said.

In addition, the board approved a recommendation to purchase two servers from Howard Technology Solutions of Laurel, Miss., for $23,238 and renewed a lease with Simply + Sweet Holdings LLC to allow it to use the kitchen at the former Ledbetter Intermediate School for $400 per month to operate an ice cream business. The business is required to maintain general liability insurance during the term of the agreement. Warren, whose son is one of the owners of Simply + Sweet, recused himself from voting on this.

The board gave its OK for Laffoon to move forward in selling 2.25 acres next to Williams Elementary to the city of Farmington. The city approached the school about purchasing the land. Laffoon said he would get the land appraised.

Laffoon did not have any new information on land that the district is interested in as a possible location for a new school building. The property, owned by Riggins Construction, is at the corner of Arkansas 170 and Clyde Carnes Road.

The board also approved a recommendation from Laffoon to add an additional year onto the contracts for assistant superintendents Joe McClung and Stephanie Pinkerton. They now will have two-year contracts with the district, instead of one-year contracts.