Arkansas' active covid case count is its highest in 5 months 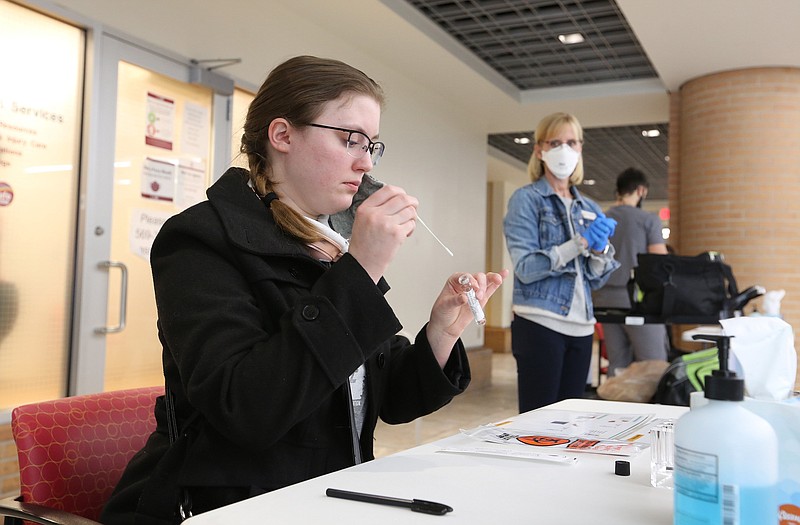 Rebekah White, a graduate student at the University of Arkansas at Little Rock, puts her swab in a container after taking a covid-19 self-test as nurse Tracy England (right) looks on at the UALR Donaghey Student Center in this Thursday, Jan. 14, 2021, file photo. (Arkansas Democrat-Gazette/Thomas Metthe)

More than 15,000 active cases were being tracked in the state by the Arkansas Department of Health on Sunday, according to data the department released.

The new daily case rolling seven-day average was 1,285 on Sunday. It is the highest seven-day period for cases since Feb. 17.

The state reported 533 recoveries on Sunday for a total of 850,416 since the pandemic started. There have been 6,436 recoveries in the past week.

Hospitalizations increased by more than 25 percent in the past week with 308 reported on Sunday, in comparison to 245 last Sunday. The number increased by one since Saturday, with Sunday typically being a low reporting day. It is the highest hospitalization count since 314 reported on March 8.

As of Sunday, there has been 11,608 covid-19 deaths since the start of the pandemic with no new deaths reported Sunday. There has been 19 deaths in the past week.

The rolling seven-day average for deaths was 2.71 on Sunday. The rolling average was down from last Saturday's average of 3.0.

There were 1,643,815 people fully vaccinated in the state Sunday. The number increased by 175 on Sunday.

Pulaski County led the state with 202 cases reported on Sunday, while Sebastian and Craighead counties followed with 36 cases each.