TELEVISION: How actor became vampire baby in ‘What We Do’ 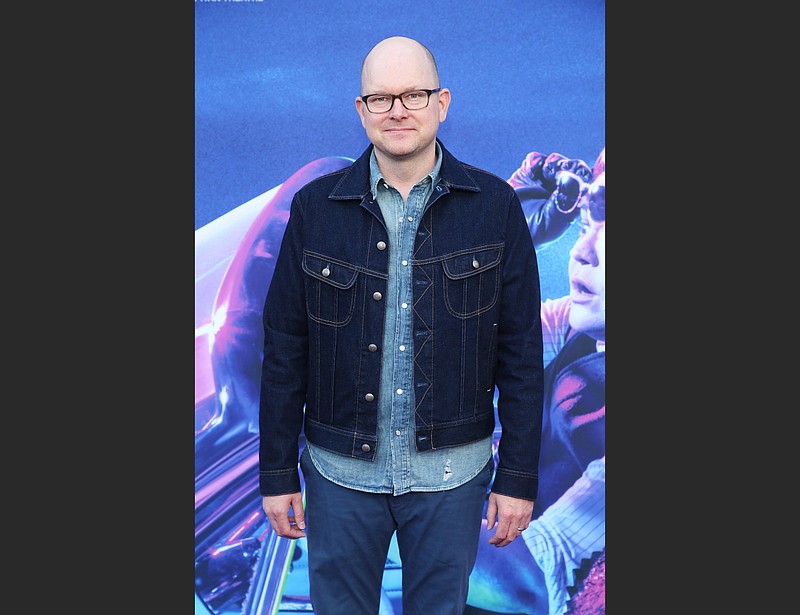 Mark Proksch attends the Disney FYC event in Los Angeles for FX’s “What We Do in the Shadows” at El Capitan Theatre in June. Proksch’s character, Colin, gets a makeover in Season 4 of the popular program. (Getty Images/TNS/Phillip Faraone)

When the third season of FX's horror comedy "What We Do in the Shadows" ended in October, energy vampire Colin Robinson was — spoiler alert — dead.

In death, we learn, that energy vampires self-regenerate as wee vampire babes, which meant actor Mark Proksch now would be playing newborn Baby Colin, a challenge he says he wasn't entirely sure how it would work.

"As a fan of TV, your first thought goes to, 'Oh, God, we're going to jump the shark, and it's going to be my character that does it,'" Proksch says as today's premiere of the fourth season. "Which is, you know, just your worst fear as an actor."

But Proksch says creator Jemaine Clement, who'd starred in (and co-created with Taika Waititi) the earlier film of the same name, and the team of writers and producers have shown they could handle the wildest of scenarios.

"The writers are so brilliant," he says. "The writing is always able to take a very crazy idea and make it seem possible."

While most of the characters in the 2014 film were adapted into the TV series, energy vampire Colin Robinson was a new character when the FX series debuted in 2019.

An energy vampire, for those of you familiar only with the traditional bloodsucking variety, drains victims of psychic energy by droning on until they are essentially bored to death.

"The endearing weirdo is kind of how I look at a lot of the roles I play," says Proksch, whose roles include Dunder Mifflin warehouse worker Nate Nickerson on "The Office" and nerdy pill dealer Daniel "Pryce" Wormald on "Better Call Saul."

The role of Colin Robinson was already well-formed when he won the part, but Proksch was encouraged to add his own touches to the character.

Now, many of Colin Robinson's long, inescapable conversations, which drain both random civilians and his vampire housemates alike, are left to his own improvisation.

"When I have to drain somebody or go on a long tangent about something ridiculous, they typically will just put in something to the effect that Colin rambles on about quote-unquote something," Proksch says. "That allows me to talk about something I know."

Proksch says he doesn't know why the show creators decided to reinvent Colin Robinson as a child, though he has a guess or two.

"My inkling is that there's only so much that can be done with an energy vampire before they get a little stale," he says. "The other vampires, you can always create different characters that they're interacting with or stories they've lived.

"With Colin Robinson, the first season he was primarily just a feeder off his roommates and off his office workers," Proksch says. "And we had talked about how that could become a bit boring for fans, and actually annoying for fans."

Over the first four episodes of the new season, Baby Colin is a hilarious character and a remarkable feat of special effects. Proksch says he has been amazed, and more than a little disturbed, to see his new appearance.

"They did every technique that they could come up with," he says. "They shrunk my body. They had child stand-ins. Some of it's video effects, some of it's practical lighting effects."

The voice was crafted in postproduction with software that not only raised the pitch of Proksch's voice, but also emulated what it would sound like coming from a smaller body, he says.

All of those TV tricks came after the crew tried out a prop baby with Proksch's face on it, he says.

"That was so disturbing to see because I could hold it," Proksch says. "Our prop guys are some of the best in the business, so it looked just like me. It could move its head, it could move its arms, and for me to hold the baby of me was incredibly eerie."

It wouldn't be fair to spoil the surprises that come in the first four episodes of the new season that we've seen. But Proksch offers a specifics-free description of his character's arc this season.

"What we find out is that energy vampires age very rapidly," he says. "It only takes about one season for them to age to around where they ended, or to where you first met them."

Starting July 21, Proksch and most of the cast of "What We Do in the Shadows" — Kayvan Novak as Nandor, Matt Berry as Lazlo and Harvey Guillen as Guillermo — will attend San Diego Comic-Con. Only Natasia Demetriou, who plays Nadja, is not expected to appear.

Proksch, who credits his Wisconsin upbringing, the TV series "SCTV" and comedians Bob Newhart and Jack Benny for much of his dry, deadpan humor, says he's looking forward to meeting fellow endearing weirdos in person there.

"They're willing to tell people, especially me, who's playing this character who's supposed to be insufferable, that they, too, identify that. It's very funny to me."