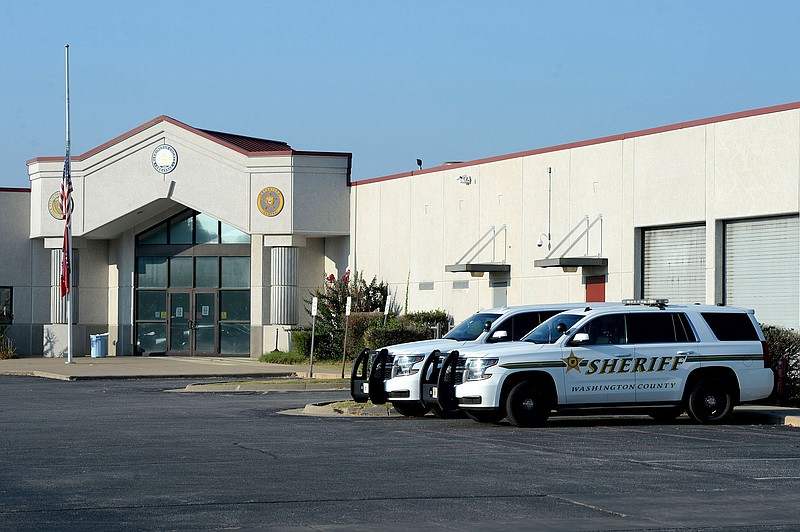 FAYETTEVILLE -- Proponents of a bigger jail cleared another hurdle Tuesday when the Quorum Court's Finance and Budget Committee endorsed an ordinance calling for a special election on the $100 million project.

Tuesday's discussion included some questions about alternatives to expanding the jail.

Justice of the Peace Shawndra Washington said there is "absolutely" a need to expand the jail but noted that any construction will take two to three years to complete, leaving the problem of overcrowding in the jail unresolved.

"This still does not solve an immediate problem," Washington said. "It takes three years to build, and we will still have inmates sleeping on the floor. We are skipping over that there are things we have not explored that can reduce overcrowding."

Washington referred to the county-commissioned study by the National Center for State Courts in 2019 that recommended a range of alternatives from improved pretrial services, consideration of lowering the bond amounts being set by the court, alternative courts such as a mental health court to divert people away from the criminal justice system and services to help people avoid missing court dates and being subject to arrest for failure to appear.

"We need to slow the process down and explore items from the study," Washington said.

Justice of the Peace Bill Ussery said he agrees that alternatives need to be considered but said the jail expansion is needed as a first step. Ussery said many programs that might be considered require space at the jail and there currently is no space available.

"A lot has been done looking at the criminal justice side of this," Ussery said. "It takes time. We need both."

The Quorum Court's Jail/Law Enforcement/Courts Committee heard a presentation at its June 6 meeting from Jim Langford with Spirit Architecture, which is already working on a $20 million covid-related expansion and which developed a jail expansion plan for the county in 2018.

Langford told the justices of the peace at the June meeting he could give them some "planning-level" information on an updated version of the 2018 plan. If the county chooses to pursue an expansion that will add from 1,000 to 1,500 beds that would require from 160,000 to 170,000 square feet of new building space. The current design of the Detention Center has 710 beds. Langford said that in 2018 the cost per square foot was put at $400 and he would now put it around $600 per square foot.

The Quorum Court has already approved design work on a covid-related expansion that is separate from the larger expansion project.

The covid-related proposal would add 232 beds and space for quarantining and isolating detainees for health reasons; for the intake, medical and courts areas; and storage and administrative purposes. That proposed expansion would cost about $20 million if approved by the Quorum Court and take two to three years to complete.

The Sheriff's Office proposed expanding the jail in 2018, citing crowding as a continuing problem. The jail has a design capacity of 710 beds but is generally considered to be at capacity when about 80% of the beds are occupied due to legal requirements for separating detainee classifications. The Detention Center population reached 776 on Monday, according to the Sheriff's Office. With that many detainees, there were 125 people sleeping on the floor on Monday, according to Randall Denzer, who oversees the Detention Center for the Sheriff's Office.

Justice of the Peace Evelyn Rios Stafford said a constituent had asked if the county is required to go through the request for qualifications process for the larger jail expansion or if the contract for the covid-related expansion can be amended to include the larger project.

County Judge Joseph Wood told the justices of the peace there is no contract in place for the larger jail expansion project and the county will comply with any state laws in the contract process.

"If it passes I'll sit down and make sure we're doing everything legally," Wood said. "But No. 1, we have to pass it. Then sit down and say is this legal? Is another RFQ needed? We will make sure we are doing things legally as well as doing our fiduciary duties."

The Finance & Budget Committee of the Washington County Quorum Court on Tuesday recommended placing a $100 million jail expansion project on the ballot for the Nov. 8 general election. The ballot language provides for the county to issue up to $113.5 million in bonds to finance the construction at the Detention Center. It also includes up to $28.5 million in bonds to expand the county’s Juvenile Justice Center. If approved, the bonds would be paid from the proceeds of a 0.25% sales tax that would expire when the bonds are paid in full. The full Quorum Court must approve the ordinance calling for the election and file it with the County Clerk’s office by Aug. 30 to have the measure placed on the ballot.