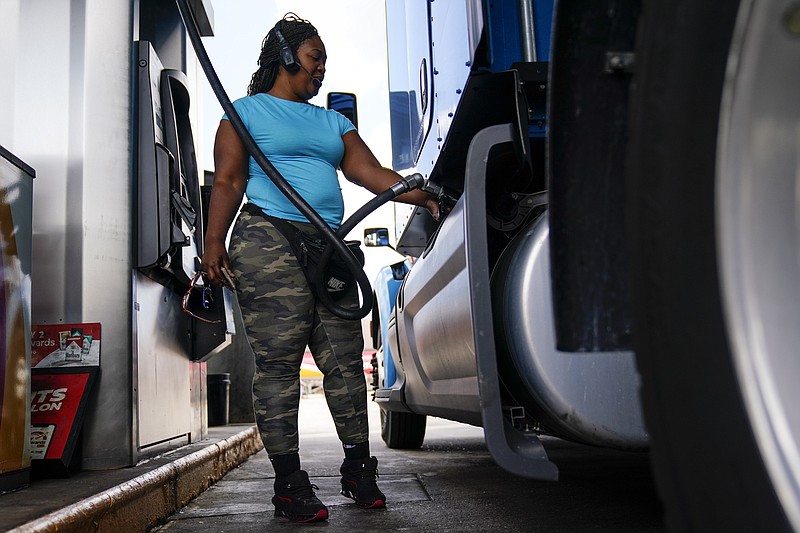 Delores Bledsoe of Houston fills up her freight hauler Wednesday in Carlisle, Pa. She said her fuel costs have tripled, “making me want to get out of the truck and go drive an Uber.” (AP/Matt Rourke)

WASHINGTON -- U.S. inflation surged to a new four-decade high in June because of rising prices for gasoline, food and rent, squeezing household budgets.

The Bureau of Labor Statistics consumer price index is up 9.1% over the past year, the biggest jump since 1981, with nearly half of the increase attributed to higher energy costs.

The year-over-year leap in consumer prices last month followed an 8.6% annual jump in May. From May to June, prices rose 1.3% -- the largest monthly increase since 2005 -- after prices had surged 1% from April to May.

"It's an ugly report," said Julia Coronado, the founder of MacroPolicy Perspectives. "I don't think there is anything good about this report, as far as the [Federal Reserve] is concerned, as far as the U.S. consumer is concerned."

With the cost of many goods and services rising faster than average incomes, many Americans are feeling the pinch in their daily routines.

"It's important that policymakers address the public," said Joe Brusuelas, chief economist at RSM. "At this point, we're talking about food, gasoline and housing. That does not make for a happy household."

The June data covers a particularly bleak period: Consumer sentiment sank last month to a low not seen since the 1980 recession, according to a closely watched University of Michigan survey.

"The offenders, again, were all too familiar to consumers, those being gasoline, food, and shelter. With their sentiment at the lowest level in years, consumers have a right to be highly distraught," Mark Hamrick, senior economic analyst at Bankrate, wrote in an analyst note. "They're facing a combination of high and sustained inflation robbing them of purchasing power."

U.S. inflation jumped amid a swift rebound from the 2020 pandemic recession. Consumers started spending again, spurred by federal aid, low borrowing costs and savings they had built up while hunkering down. As Americans channeled their purchases toward items for the home, like furniture, appliances and exercise equipment, supply chains became snarled and prices for goods soared. Russia's war against Ukraine further magnified energy and food prices.

In recent months, as covid fears have receded, consumer spending has gradually shifted away from goods and toward services, resulting in higher prices for vacations, restaurant meals and entertainment.

Some economists have held out hope that inflation might be reaching a short-term peak. Gasoline prices, for example, have fallen from $5 a gallon in mid-June to an average of $4.63 nationwide Wednesday -- still far higher than a year ago but a drop that could help slow inflation for July and possibly August.

In addition, shipping costs and commodity prices have begun to fall, and pay increases have slowed. Surveys show that Americans' expectations for inflation over the long run have eased -- a trend that often points to more moderate price increases over time.

There have been signs that inflation was slowing before -- last summer, and in April of this year -- only for it to surge again in subsequent months.

"There may be some relief in the July numbers -- commodity prices have come off the boil, at least -- but we are a very, very long way from inflation normalizing, and there is no tangible sign of downward momentum," said Eric Winograd, an economist at asset manager AB.

For now, the relentless pace of price increases has frustrated many Americans, some of whom are placing blame on companies for using inflation as a cover to raise prices beyond the amount they need to cover their own higher costs.

"I feel the inflation pain every day," Susana Hazard said this week outside a grocery store in New York City. "Every day, everything is going up and up, more than inflation -- they're price-adjusting. Because even if inflation doesn't happen, they've raised the prices."

Most economists say corporate price gouging is, at most, one of many causes of runaway inflation and not the primary one.

The breadth of the price gains shows how rising costs have seeped into nearly every corner of the economy. Grocery prices have jumped 12.2% compared with a year ago, the steepest such climb since 1979. Rents have risen 5.8%, the most since 1986. New car prices have increased 11.4% from a year earlier. And average airline fares, one of the few items to post a price decline in June, are nevertheless up 34% from a year earlier.

The biggest shock has been energy prices, which rose 7.5% just from May to June. Gasoline prices have risen nearly 60% compared with a year ago.

Excluding the volatile food and energy categories, so-called core prices rose 0.7% from May to June, the biggest such spike in a year. Core prices jumped 5.9% from a year ago.

Inflation is surging well beyond the United States, with 71 million people pushed into poverty in the three months after Russia invaded Ukraine, the U.N. Development Program said last week.

With many people priced out of the market for houses and looking instead to rent, demand for apartments has sent rental rates beyond affordable levels. The average cost of new leases has jumped 14% in the past year, according to real estate brokerage Redfin, to an average of $2,016 a month.

The Labor Department measure tends to lag behind other estimates, so it is likely that rent increases will contribute to rising inflation in the consumer price index through the rest of this year, said Mark Zandi, chief economist of Moody's Analytics.

"The good news is that market rents appear to be topping out, as renters are not able to afford the higher rents and are balking," Zandi said. "More rental supply is also coming, although this will take a year or two to have a meaningful impact on market rents."

Nearly 836,000 multifamily units are under construction, the most since 1973, according to Jay Parsons, chief economist at RealPage. But most new construction targets higher-income tenants and not the lower end, where supply shortages are most extreme, he said.

Federal Reserve Chair Jerome Powell and other Fed officials are engaged in the fastest series of rate increases since the late 1980s to try to slow the price spikes. The central bank is expected to raise its key short-term rate later this month by a hefty three-quarters of a point, as it did last month, with potentially more large rate increases to follow.

Powell has stressed that the central bank wants to see "compelling evidence" that inflation is slowing before it would dial back its rate increases. Such evidence would need to be a "series of declining monthly inflation readings," Powell said at a news conference last month.

Many economists worry that the Fed's drive to quell inflation will cause it to tighten credit too aggressively even while the economy, by some measures, is slowing. Much higher borrowing costs could trigger a recession, potentially by next year.

Bank of America Corp. economists on Wednesday forecast a "mild recession this year" in the U.S., saying services spending is slowing and hot inflation is spurring consumers to pull back.

"A number of forces have coincided to slow economic momentum more rapidly than we previously expected," analysts led by Michael Gapen, who recently joined the firm as head of U.S. economics, said in a report Wednesday. These include inflation from food and energy prices that's leaving households with less available for discretionary purchases, and tighter financial conditions, with higher mortgage rates denting affordability.

In Houston, Three Brothers Bakery has been open for 73 years, most recently surviving a fire, Hurricane Harvey and the 2021 Texas freeze. The latest test is high inflation, which has sent prices for key ingredients like honey and unsalted butter soaring. Eggs are up more than 300%, compared with last year. President and co-owner Janice Jucker said she expects that the war in Ukraine could send prices for flour even higher by the holidays, the busiest time of the year.

Even as recession fears grow elsewhere in the economy, Jucker said what matters to her is how people feel about their ability to buy goodies for their loved ones.

"It's when things aren't great, that's what we worry about," she said. Jucker doesn't know whether people will begin to decide they just can't swing $4 for one of the bakery's beloved gingerbread men.

"It's still something people come in and they get all the time, and I worry at some point they may say, 'no,' " Jucker said.

Information for this article was contributed by Christopher Rugaber and David R. Martin of The Associated Press, Rachel Siegel of The Washington Post, Scott Lanman, Ana Monteiro, Matthew Boesler and Prashant Gopal of Bloomberg News (WPNS) and Jeanna Smialek of The New York Times. 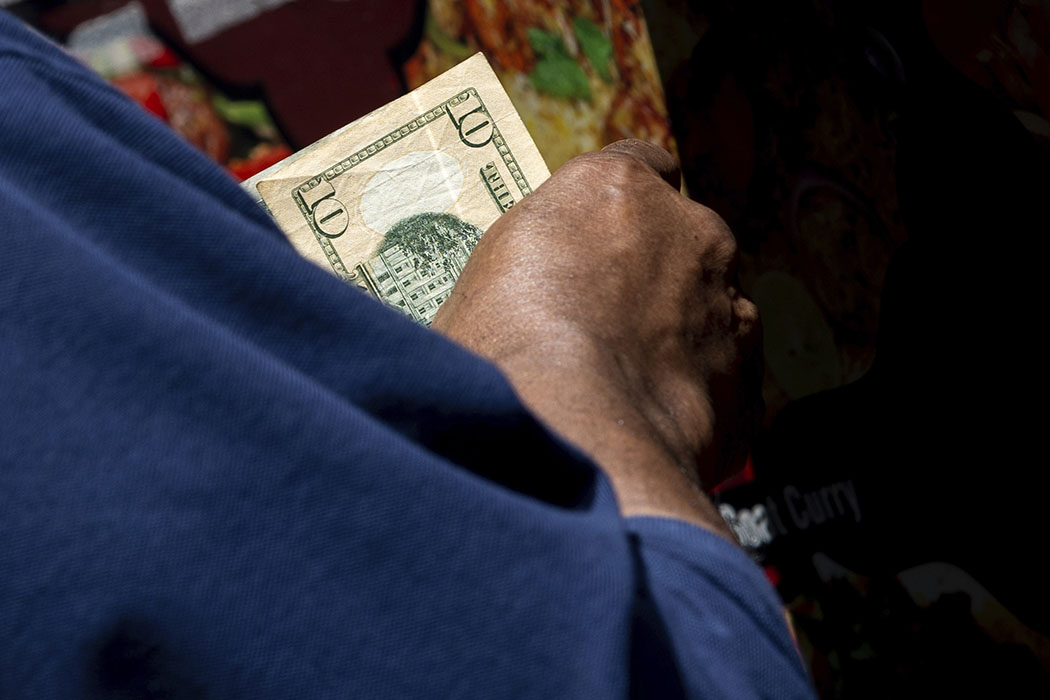 A customer pays at a Halal food truck Wednesday in New York. The increase in food prices is helping drive inflation to painful levels. (AP/Julia Nikhinson)