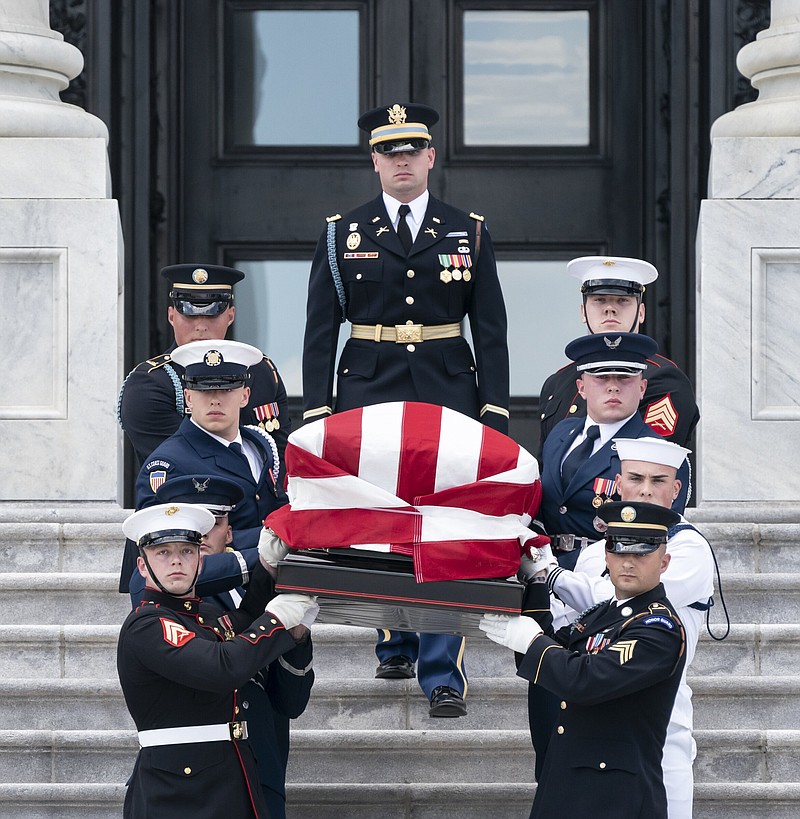 A joint service honor guard carries the casket bearing the remains of Hershel W. “Woody” Williams out of the U.S. Capitol on Thursday after the hero of Iwo Jima lay in honor in the rotunda. (AP/J. Scott Applewhite)

WASHINGTON -- Congress gave its ultimate final salute Thursday to Hershel W. "Woody" Williams, a 5-foot-6 "force of nature'" in the battle of Iwo Jima and the last remaining Medal of Honor recipient from World War II.

Seventy-seven years after his wartime heroism, Williams, who died last month at 98, lay in honor in the U.S. Capitol Rotunda, a tribute reserved for the nation's most distinguished private citizens. Only six others have received the honor: civil-rights icon Rosa Parks, the Rev. Billy Graham and four Capitol police officers.

Just 21, Williams was a Marine corporal when U.S. forces came ashore on the strategic Japanese island in early 1945. Williams moved ahead of his unit and eliminated a series of Japanese machine gun positions. Facing small-arms fire, he fought for four hours, repeatedly returning to prepare demolition charges and obtain flamethrowers. President Harry Truman awarded him the Medal of Honor, the military's highest decoration, later that year.

But the new tribute to Williams was about more than his bravery in combat service. It served as recognition for a generation of heroes, now dwindling in numbers, who fought in World War II. House Republican Leader Kevin McCarthy said Williams wanted Thursday's ceremony as a way to recognize every Medal of Honor recipient from that war.

"With Woody's passing, we have lost a deeply selfless American and a vital link to our nation's greatest generation," House Speaker Nancy Pelosi said during the ceremony.

Pelosi said Williams was far from the biggest Marine, standing only 5-foot-6 and weighing in at 130 pounds, "yet he was a force of nature on the battlefield." She said he singlehandedly destroyed seven enemy positions, and that Truman said he acted with "unyielding determination and extraordinary heroism."

Lawmakers have lauded Williams throughout the week, marveling at his youth during his actions at Iwo Jima. They also hailed his public service after his military career, which included establishing a foundation that works with local stakeholders to create monuments for Gold Star families of the fallen throughout the country.

"By that point, he'd been giving back to his beloved country for 77 years," McConnell said. "So, needless to say, Woody's service leaves us a rich legacy."

Williams was well known in his native West Virginia. In 2018, a Huntington, Va., medical center was renamed in his honor, and the Navy commissioned a mobile base sea vessel in his name in 2020.

The state's two senators took the Senate floor Wednesday to remember him. Democrat Joe Manchin called him the "greatest of the greatest generation." Republican Shelley Moore Capito recalled his humility, saying that when Truman presented him with the Medal of Honor, Williams remembered asking himself why he was selected for the nation's highest military honor when Marines right beside him did not make it home.

"That shows you the kind of man that Woody Williams was, always putting his country and his comrades first and never concerned with who got the credit," Capito said. 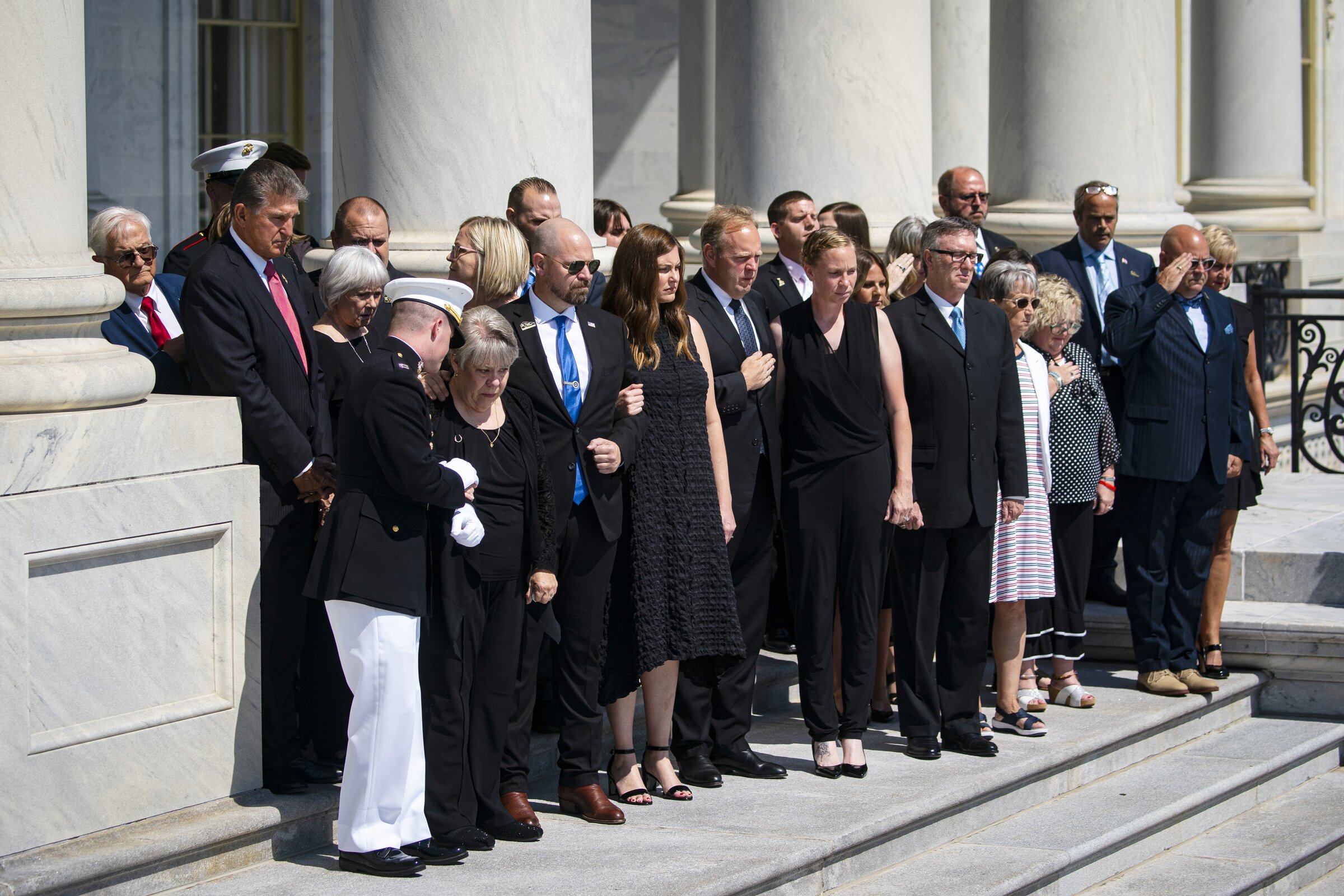 Family, friends and officials watch Thursday as Hershel W. “Woody” Williams’ casket is carried into the U.S. Capitol. “With Woody’s passing, we have lost a deeply selfless American and a vital link to our nation’s greatest generation,” House Speaker Nancy Pelosi said during the ceremony. (AP/Al Drago) 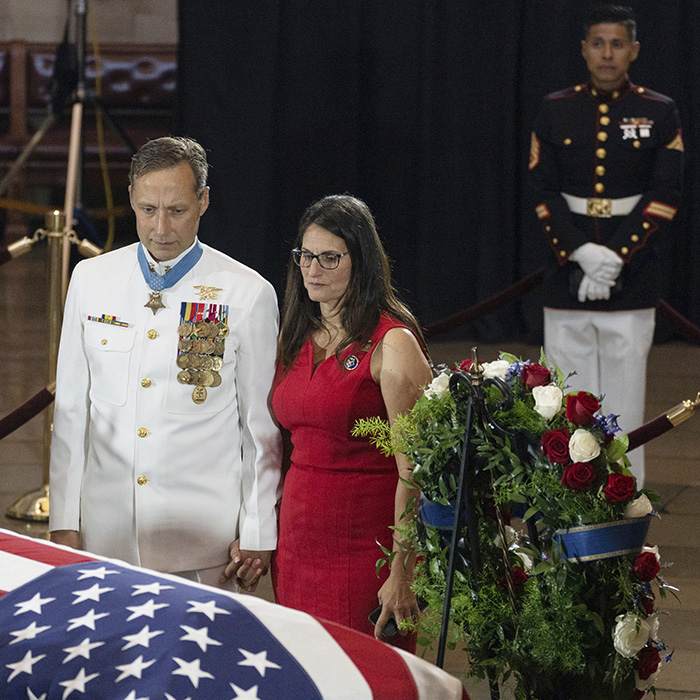