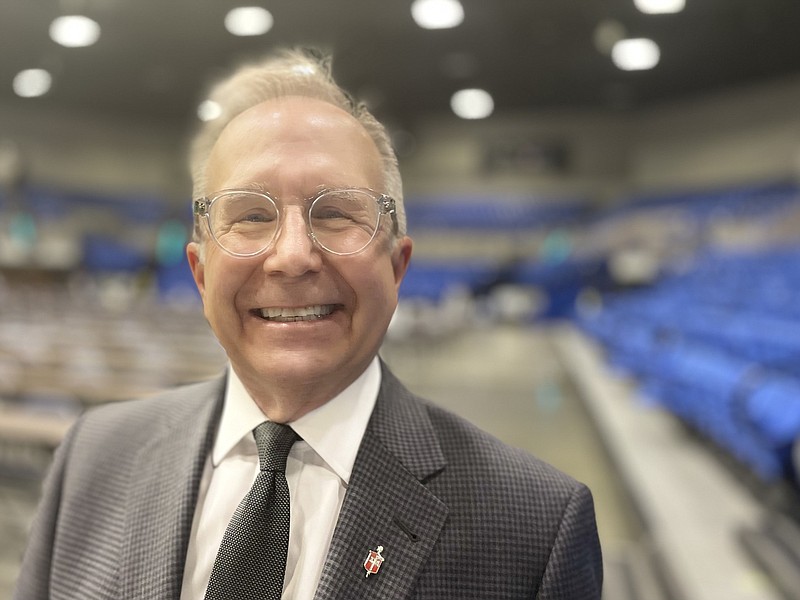 United Methodist Bishop Gary Mueller, photographed on June 2, 2022 at the Arkansas annual conference of the United Methodist Church in Hot Springs, predicts that most of the state’s roughly 615 United Methodist churches will opt not to disaffiliate from the denomination. For those congregations that do break away, “I want to bless them and have them end up where they think God wants them,” Mueller said. (Arkansas Democrat-Gazette/Frank E. Lockwood)

The state's second-largest United Methodist congregation will vote July 31 on whether it wants to leave the denomination as the only one bigger is seeking feedback from members before determining its next steps.

After decades of debate over human sexuality and Scripture, many traditionalist congregations in Arkansas and across the country are weighing whether to break away.

Jonesboro First United Methodist Church is the largest of roughly four dozen in the state that is in the disaffiliation process, according to Bishop Gary Mueller.

Four or five others that had entered the process decided they do not wish to continue it "at this point in time," Mueller added.

"I expect that they're wanting to wait and see," Mueller said. "I think it simply means they believe it's better to go slow than to go fast."

There are roughly 615 United Methodist congregations statewide, with total membership of 113,159.

None has yet disaffiliated this year, although churches in some other states have already opted to do so.

With average Sunday attendance of 1,577, Jonesboro First has been listed as one of the country's 100 largest United Methodist churches.

To move forward with disaffiliation, its supporters will need to receive at least two-thirds of the vote on July 31.

It would cost an estimated $650,000 to complete the disaffiliation process, but the congregation would be able to keep its property, the church's administrative board stated in a June 26 letter to church members.

The church has property and assets with an estimated value of $20 million, along with indebtedness of about $5 million.

Pastor John Miles declined to comment on the forthcoming vote this week, saying he would be able to answer questions once the vote was complete.

Central United Methodist Church in Fayetteville, with average Sunday attendance of 1,886, hasn't decided whether to enter the disaffiliation process.

ASKING MEMBERS TO WEIGH IN

But it is asking its members to weigh in regarding "the schism within our denomination," according to its website.

Main Street Analytics of Little Rock is overseeing the survey, which began Monday and will continue until July 29.

The company will provide Central's leadership with "aggregate survey responses" but will not share individual responses "in any way."

"Thus, all respondents can be assured of anonymity," Central has stated on its website.

The results will be presented to Central's church council at next month's meeting and will be posted online as well.

The goal is to "gain input from our congregation on the church's future," according to an April 26 letter posted online.

While traditionalists have led Central for decades, Carness Vaughan, the congregation's pastor since July 2021, said there are also more theologically progressive members who are making their voices heard.

Vaughan isn't predicting what the outcome would be.

"I think what's important is that we're trying to cover this whole journey with prayer," he said. "We can't get ahead of God on this. We want God to be taking the lead. And so we're really trying to enter into each phase of this, each step that we take, bathed in prayer and asking the Holy Spirit to lead us."

Unlike other major mainline denominations, it has not embraced the gay rights movement, opting to retain longstanding restrictions on marriage and ministry.

The church's Book of Discipline, which contains its laws and doctrines, states that "the practice of homosexuality is incompatible with Christian teaching."

Therefore "self-avowed practicing homosexuals" are not supposed to be ordained as ministers or appointed to serve.

In some jurisdictions, church leaders have ignored the restrictions, portraying them as unjust and un-Christlike.

Every four years, the concerns arise at the church's General Conference. In recent years, a majority of the U.S. delegates have favored dropping the restrictions, but a coalition of U.S. and overseas traditionalists has outvoted them.

More than half of the United Methodist Church's members live outside the United States, primarily in Africa.

Unable to agree about church doctrine and discipline, a group of traditionalist and progressive leaders decided it might be best for the two camps to part ways, crafting what they called a Protocol of Reconciliation and Grace Through Separation.

Unveiled in January 2020, it would have enabled traditionalist churches to leave -- and take their property with them -- if a majority of the congregation voted to do so. To be adopted, the plan needed to be approved by delegates to the church's 2020 general conference in Minneapolis, a gathering that was canceled due to covid-19.

Attempts to reschedule the meeting have been unsuccessful; the next general conference isn't due to occur until 2024.

Rather than waiting, some congregations are attempting to leave now, using a disaffiliation pathway established at a special session of general conference in 2019. But the path is difficult, in part because it takes a supermajority to break away.

Not all of those disaffiliating in the United States are traditionalist; some progressive congregations have also severed ties.

A special online session of the Arkansas Annual Conference has been scheduled for Nov. 21 to consider any disaffiliation agreements that are ready for approval.

Clergy and lay delegates will need to ratify the agreements at the conference before they can take effect.

Another special session, tentatively set for Nov. 19, would address whether Arkansas congregations can leave the United Methodist Church and transfer to another denomination. That issue could be moot, however, if the denomination's judicial council decides church law doesn't allow it.

"I've said all along that I expect the vast majority of churches will remain United Methodist," he said.

"There's such shared history, such vitality in ministry," he said. "There's so many things that are holding people together. And those are stronger ties, for many, than our particular issues at any given time."

Nonetheless, he is portraying disaffiliation as a question of conscience.

"I believe very strongly in Christian unity, and over the past years have been an outspoken voice for that. But it is also important for people to listen to God's voice," he said. "For those who feel that they do not have a choice, I want to bless them and have them end up where they think God wants them."