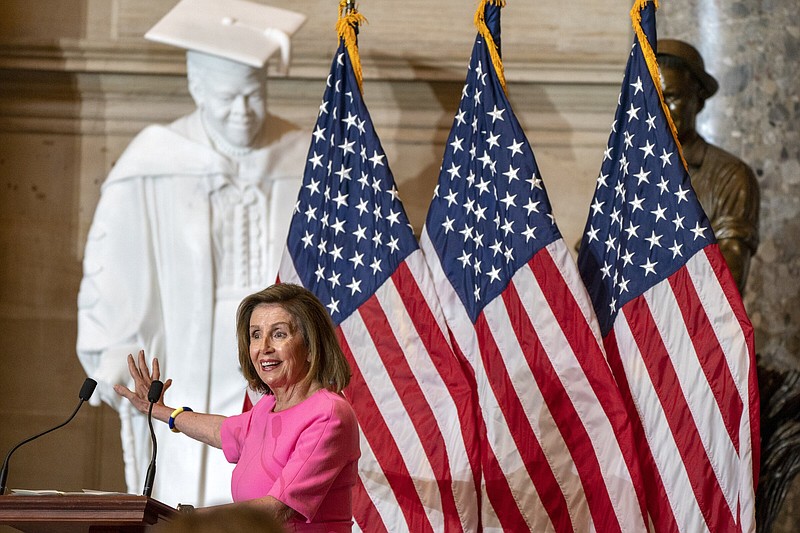 House Speaker Nancy Pelosi, D-Calif., speaks Wednesday in front of a statue of civil rights leader and trailblazing educator Mary McLeod Bethune, during a ceremony in honor of Bethune in Statuary Hall at the U.S. Capitol in Washington. (AP/Jacquelyn Martin)

A statue of Mary McLeod Bethune was unveiled last week in the U.S. Capitol, making her the first Black American in the National Statuary Hall collection.

Bethune was a civil-rights activist, a presidential adviser and the founder of the Daytona Literary and Industrial Training School for Negro Girls, which became Bethune-Cookman University in Daytona Beach. Her statue represents the state of Florida.

Since 1864, each state has been able to send two statues of distinguished citizens to represent it in the U.S. Capitol, constituting the National Statuary Hall collection.

Since 2000, states have been able to remove and replace existing statues with new ones. A handful of states have done so, but until Wednesday none of those new additions depicted Black Americans.

The statue of Bethune replaces one of Confederate Gen. Edmund Kirby Smith. The change was directed by a state law signed by then-Gov. Rick Scott, a Republican, in 2018. The Smith statue was removed in 2021.

The Bethune statue will be joined by others in the next few years. Virginia removed its statue of Confederate Gen. Robert E. Lee in 2020 and plans to replace it with one of civil-rights leader Barbara Johns.

In 2019, Arkansas decided to replace its statues of white supremacist James Paul Clarke and Confederate sympathizer Uriah Milton Rose with depictions of civil rights activist Daisy Bates and musician Johnny Cash, though both of the old statues remain in the Capitol.

Neither Congress nor the Architect of the Capitol, the agency that maintains the statues, has the authority to remove them. Under current law, statues representing a state may only be replaced with the approval of that state's legislature and governor.

There are also statues of Frederick Douglass and Rosa Parks, and busts of Martin Luther King Jr. and Sojourner Truth. The latter three were commissioned by Congress and don't represent any single state. The Douglass statue was a gift from the District of Columbia.

Rep. Carolyn Maloney, D-N.Y., is trying to get Congress to commission a statue of abolitionist and Union spy Harriet Tubman. A 2011 Maryland effort to replace one of its Capitol statues with Tubman failed in the state legislature.

Bethune was born in a cabin in South Carolina in 1875, the daughter of two formerly enslaved people. She had 16 siblings and was the only one able to attend a mission school, the only school available to Black students there at the time.

She then went to seminary in North Carolina. Bethune taught in Georgia, South Carolina and Florida before starting her own boarding school in 1904. In 1936, she began serving as President Franklin D. Roosevelt's director of Negro Affairs for the National Youth Administration.

She also served in his unofficial "Black Cabinet" and was a close friend of first lady Eleanor Roosevelt. She was a civil rights activist and helped start the United Negro College Fund before her death in 1955.