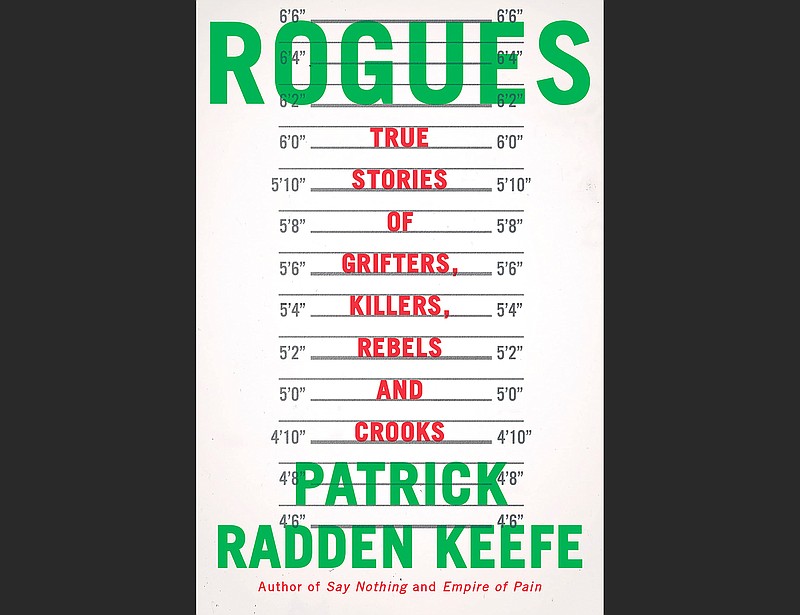 In most of his previous bestselling books, including "Say Nothing: A True Story of Murder and Memory in Northern Ireland" and "Empire of Pain: The Secret History of the Sackler Dynasty," journalist Patrick Radden Keefe has masterfully illuminated what he calls his "abiding preoccupations." These are, namely, "crime and corruption, secrets and lies, the permeable membrane separating licit and illicit worlds, the bonds of family, the power of denial."

His latest book, "Rogues: True Stories of Grifters, Killers, Rebels and Crooks" (Doubleday, $30), offers a glimpse at these preoccupations in his shorter-form work, a collection of essays originally written for the New Yorker. Taken separately, each piece offers a portrayal of rogues variously defined, ranging from the overtly criminal to the lovable (in the case of chef Anthony Bourdain). Taken together, the essays reflect the collective preoccupations of the unsettling era in which we now live: mass shootings and terrorism, unaddressed mental health problems, and the many flavors of financial corruption.

Keefe is frequently engaged with stories involving a rogue and a pursuer who is obsessed with bringing the criminal to justice. (Or, in the case of death penalty defense lawyer Judy Clarke, getting the accused off.) Take accused German wine forger Hardy Rodenstock, who died in 2018 still insisting on the authenticity of his discoveries, most notably bottles from the 1780s that supposedly once belonged to Thomas Jefferson. One collector of the "Th.J." bottles, as they came to be known, was American tycoon Bill Koch, brother of the renowned conservative donors Charles and David. Koch spent considerable amounts of time and money filing lawsuits against Rodenstock, throwing himself "into his battle against Rodenstock and phony wine with the same headlong enthusiasm that he devoted to collecting wine in the first place." Another avenger profiled is Ken Dornstein, who lost his brother in the 1988 Lockerbie airline bombing. A respected journalist in his own right, Dornstein has spent almost his entire adult life chasing down the shadowy culprits behind the bombing, a quest complicated by the 2011 Arab revolutions and the collapse of Libya.

Often in Keefe's work, the lines between criminal and crusader are blurred, as in the case of computer technician Herve Falciani, who stole confidential data from the private Swiss bank HSBC containing the names of wealthy individuals who had stashed their money offshore. Swiss law enforcement pursued him, but the French, eager to gain evidence of citizens who had evaded taxes, welcomed him as a hero.

Judged solely by the severity of their crimes, many of the lawbreakers are overtly despicable. Yet while not excusing their misdeeds, Keefe nonetheless manages to highlight the humanity and contradictions in their lives. The Syrian arms dealer Monzer al-Kassar, provider of weapons and ammunition to terrorists and guerrillas, was faultlessly hospitable to guests at his Marbella mansion and was described as a loving father to his children. And Mathew Martoma, convicted of insider trading based on advance knowledge of poor results in tests of an Alzheimer's drug, stood out to his undergraduate professor at Duke as someone with an abiding interest in the study of medical ethics. Keefe also re-creates the mundane everyday lives of his subjects prior to their crimes: Boston marathon bomber and erstwhile jihadist Dzhokhar Tsarnaev spent his college evenings "getting high and playing video games with friends," photographs of his dorm room revealing "a painfully American banality: cinder-block dorm rooms, big-screen TVs, mammoth boxes of Cheez-Its."

Intimate characterizations are at the heart of Keefe's writing. Chef Anthony Bourdain, for example, "with his Sex Pistols T-shirt and his sensualist credo" had "something of the aging rocker about him," belying the fact that he was "controlled to the point of neurosis: clean, organized, disciplined, courteous, systematic. He is Apollo in drag as Dionysus." In a meeting with the former president of Guinea, Alpha Conde, an idealistic ruler attempting to counter corruption in the country's iron ore mining industry, Keefe writes that Conde "listed slightly to the right while we talked, in a posture of heavy-lies-the-crown fatigue."

A book largely about highly publicized rogues and those engaged with trying to entrap them, "Rogues" is a fast-paced and frequently suspenseful read. While the often-high-profile crimes committed are familiar, Keefe is a virtuoso storyteller, able to create suspense with his descriptions of how those crimes unfolded. There is a feeling in many of the essays that, given the smallest of detours, events might not have happened as they did. What if, for example, neurobiologist Amy Bishop, who in 2010 shot and killed three of her colleagues in a department meeting at the University of Alabama after not receiving tenure, had been investigated for the 1986 murder of her brother, whom she supposedly shot by accident? What if the television show "The Apprentice" had never existed: Would Donald Trump have ascended to the presidency? Keefe makes a convincing case that "The Apprentice" producer Mark Burnett not only created reality television as we know it today but also fashioned the successful image of a man whom American viewers could then envision as presidential. "The Apprentice," Keefe writes, "portrayed Trump not as a skeezy hustler who huddles with local mobsters but as a plutocrat with impeccable business instincts and unparalleled wealth — a titan who always seemed to be climbing out of helicopters or into limousines."

The collection ends with a 2017 essay about the meteoric rise of chef Anthony Bourdain. Keefe masterfully captures Bourdain's frantic energy and creativity, as well as his struggles with substance abuse. Tragically, Bourdain took his own life a year after the essay was published. It's a depressing endnote that suggests the perils of notoriety — good rogues are gone all too soon, while others manage to evade justice indefinitely. "Rogues" reveals much that is troubling about our world today: the challenges of international cooperation, the ill-gotten gains of obscenely wealthy individuals, and the intractable presence of terrorism and mass shootings. The overwhelming impression from these essays is that justice in our violent, turbulent world is fragile and elusive. Fortunately, there is no shortage of individuals engaged in lifelong crusades to pursue it or, in the case of Keefe, to write about it.