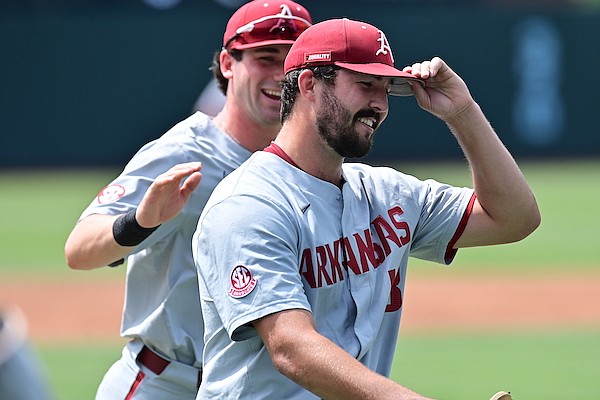 Arkansas pitcher Connor Noland (13) smiles and is congratulated by third baseman Cayden Wallace as he walks off the field during an NCAA Tournament game against North Carolina on Saturday, June 11, 2022, in Chapel Hill, N.C.

FAYETTEVILLE — Five Arkansas baseball players and a transfer who committed to the Razorbacks were drafted Monday on the second day of the MLB Draft.

Shortstop Jalen Battles was Arkansas’ first player selected on Day 2, by the Tampa Bay Rays in the fifth round. The Razorbacks had three players drafted in the ninth round — left-handed pitcher Evan Taylor (Miami Marlins), right-handed pitcher Connor Noland (Chicago Cubs) and catcher Michael Turner (Chicago White Sox) — and right-handed pitcher Zebulon Vermillion was drafted by the New York Mets in the 10th round.

Arkansas also saw one of its prized recruits, shortstop Jordan Sprinkle, drafted by the White Sox in the fourth round. Sprinkle spent the past three seasons at UC-Santa Barbara and committed to the Razorbacks on July 8. He was considered a top candidate to replace Battles as the team’s shortstop in 2023.

Sprinkle has a value of $452,700 for his slot as the 131st overall selection in this year’s draft. Slot values, assigned by MLB, are the suggested signing bonus for each pick in the draft, but are flexible.

Noland and Taylor are likely to command signing bonuses somewhat in line with their slot values because they have college eligibility remaining. Turner and Vermillion have exhausted their eligibility and are likely to be given contracts under slot value, which would allow their organizations to spend over-slot money on other picks in the first 10 rounds.

MLB.com draft analyst Jonathan Mayo referred to Sprinkle and Battles as strong defenders in his comments during Monday’s draft coverage.

“(Sprinkle) struggled with the bat,” Mayo said. “He had made some changes to his swing the previous year that made him jump really on the radar. He didn’t hit nearly as well this year, but he can flat out play at shortstop. This is a no doubt about it, long-term shortstop — plus arm, great range. He has some offensive skills if he can kind of refine his approach at the plate.

“Jalen Battles is one of the best defensive shortstops in the college ranks. He’s got solid range and a very strong arm. He can definitely play short. He’s the reason why Robert Moore was at second base. He’s got some power…it’s not big-time power. The bat is going to determine if he’s an every-day player or is he a utility guy.”

Noland was Arkansas’ No. 1 starter this year and Taylor was arguably the team’s best relief pitcher. Both had an ERA of 3.65.

Taylor was often the Razorbacks’ first reliever out of the bullpen. He had a team-best .179 batting average against and struck out 54 in 44 1/3 innings. He had a WHIP of 0.99.

“He had a really nice season at Arkansas,” said MLB.com senior writer Jim Callis, who added, "He gets outs. He’s especially tough on left handers.”

Noland went 8-6 in 19 starts and pitched a team-high 116 innings. The fourth-year junior from Greenwood had 113 strikeouts and walked 34.

He was especially good during the NCAA postseason when he allowed 5 runs in 29 1/3 innings for an ERA of 1.53, and allowed 25 hits and 5 walks for a WHIP of 1.02 in starts against Grand Canyon, North Carolina, Stanford and Ole Miss.

In comments before the draft, Noland left the door open to return to the Razorbacks for another season.

“I think he loves wearing this uniform,” Arkansas coach Dave Van Horn said of Noland on July 7. “I just think that if things aren't just exactly what he wants, that there is an opportunity. Obviously there's a chance he'll come back. I've met with him about it.

“I don't think Connor is just going to go because somebody says, ‘Hey, we're going to give you a little bit of money and go play.’ It’s going to have to be a situation where he feels really good about it.”

Turner, who transferred from Kent State prior to the season, was one of the Razorbacks' top hitters this year with a .323 batting average, .890 OPS, 9 home runs, 17 doubles and 53 RBI. He was the most outstanding player of the NCAA Stillwater Regional and was the catcher on the All-NCAA Tournament team.

Vermillion spent six seasons at Arkansas. He pitched mostly as a reliever, but had a run of quality starts early in the 2021 season. He had a 2.39 ERA in 26 1/3 innings this year.

The Razorbacks have had eight players drafted through two days, which trails Tennessee’s nine for the most by a college program. Arkansas third baseman Cayden Wallace (Kansas City Royals), right-handed pitcher Peyton Pallette (White Sox) and second baseman Robert Moore (Milwaukee Brewers) were drafted in the second round Sunday. Moore was drafted as a shortstop.

Former Arkansas pitcher Caleb Bolden was also drafted by the Boston Red Sox in the seventh round. Bolden, who spent the 2018-21 seasons with the Razorbacks, pitched this year at TCU.

Perhaps as notable as which Razorbacks have been drafted is which players associated with the program have not been selected through two days. Arkansas has had one high school signee — Boerne, Texas, right-handed pitcher Cole Phillips, 57th overall to the Atlanta Braves — drafted, which strengthens the likelihood the Razorbacks will keep the bulk of their 17-man high school signing class intact.

Arkansas has also committed at least 16 transfers — 6 from Division I and 10 from junior college.

Earlier this month, Van Horn said players are often drafted based on their sign-ability.

“If they say they want a million dollars, and they're being told we can't give you more than ($500,000) then they should come to school and triple that,” Van Horn said.

Round 11 of the draft is scheduled to begin at 1 p.m. on Tuesday.