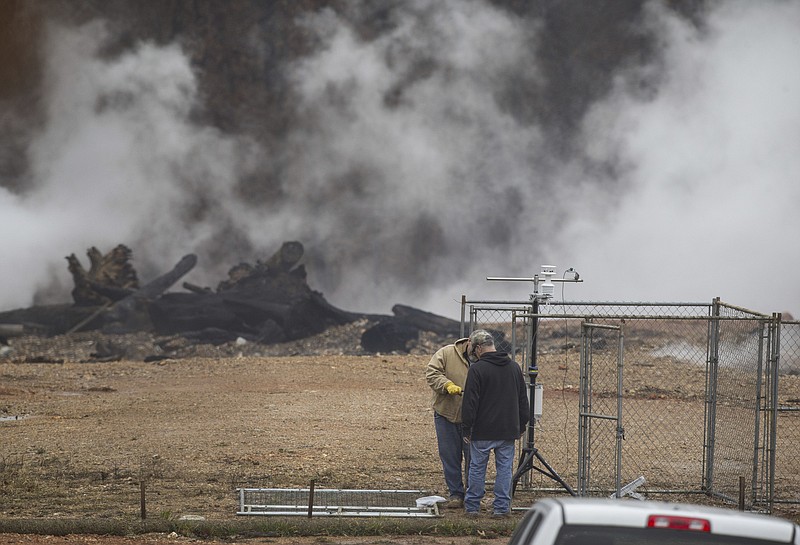 FILE - In this Jan. 17, 2019 file photo, staff from the Arkansas Department of Environmental Quality install a meteorological station to record wind speed and direction at the former stump dump site in Bella Vista, Ark. The underground fire at the illegal dumping site in northwest Arkansas has been smoldering for at least seven months, sending noxious smoke throughout the community, with costs to extinguish it estimated in the tens of millions. The fire, which started in July is beneath dozens of feet of waste and dirt in a former dump intended for tree limbs and stumps. (Ben Goff/The Northwest Arkansas Democrat-Gazette via AP, File)

BELLA VISTA — A $6.3 million settlement has been reached in a lawsuit claiming smoke from a stump dump fire hurt nearby residents.

Sach Oliver, an attorney involved in the case, confirmed Monday a $6.3 million settlement had been reached to resolve the lawsuit. Oliver said the settlement involves 85 households with 150 people.

A jury trial on the matter was set to begin Aug. 2 in Benton County Circuit Judge Brad Karren’s court.

Oliver is one of the attorneys for the plaintiffs, who sued seeking compensation for the damages they say they suffered from the fire’s smoke and noxious fumes.

An underground fire burned at the Trafalgar Road stump dump site for months before the Bella Vista Property Owners Association hired firms to put it out. City firefighters discovered the fire July 29, 2018.

The association operated the dump from 2003 to 2016 on land leased from Blue Mountain Storage. The dump was a convenience for builders and residents in the area needing to dispose of organic matter, including leaves. By the time the fire was found burning underground, Brown’s Tree Service had purchased the land.

Contractors started work May 18, 2019, after the association took the job of extinguishing the fire and cleaning the 4.7-acre site from the state’s environmental quality agency.

The association is paying $4.8 million of the settlement, with Brown’s paying $1 million and Blue Mountain settling for $500,000, Oliver said.

“We are thankful they put the fire out,” Oliver said, adding his clients “wanted the smoke to stop.”

Oliver said a third party will be hired to oversee the equitable division of the settlement. He said there must be an evaluation of individuals because not every person had the same harm.

“We understand the wide-ranging impact the fire had on everyone involved,” said Tom Judson, chief operating officer for the property owners association. “With the settlement of this lawsuit, we are now closing the chapter on a challenging ordeal for our entire community. We hope that this is an important, positive step in moving forward with some closure for all of the families and people affected by the fire.”

Judson said in early 2019, the state assessed the project and estimated it would cost between $20 million and $36 million and take roughly nine months to extinguish the fire.

“Despite the Bella Vista POA’s closure of the stump dump in 2016, marking the end of their involvement with the site, the POA stepped in and was successful in putting out the fire for $4 million and did so in less than 30 days,” Judson said. “We are glad the contractors the POA hired were able to extinguish the fire so quickly and mitigate the damage with urgency, exhausting all resources to the best of our ability.”

Judson said the association is paying $1 million towards the settlement while its insurance carrier is contributing $3.8 million.