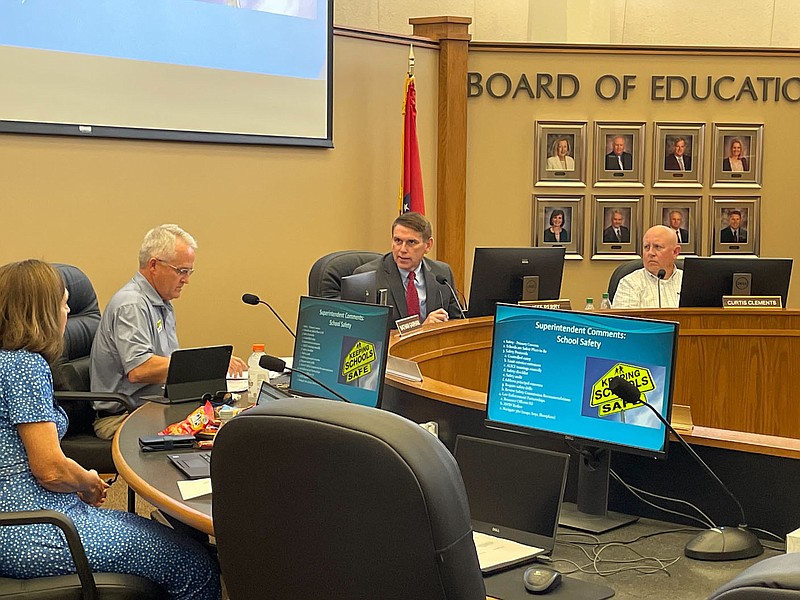 ROGERS -- The School District will seek the input of all its stakeholders as it goes about crafting a strategic plan, the district's new superintendent said Tuesday.

Jeff Perry took over as superintendent July 1, replacing Marlin Berry, who retired. Perry had been a school superintendent in Hamblen County, Tenn., the last five years.

The School Board's regular monthly meeting Tuesday was its first with Perry at the helm. Perry took the opportunity to talk about several topics, including his vision of the planning process.

The district will create a strategic plan that includes goals for both the short and long term, he said.

The plan will be used "as the map to guide everything we do," Perry said.

He said the plan should be "extremely functional" and simple, something that can fit on one or two pages.

Over the next couple of months, the district will initiate a series of community forums in the schools to talk with students, parents and other community members about what's going well and what issues need to be addressed, he said.

Administrators and board members then will take that information and go on a retreat board meeting -- Perry pegged early September as the target time for that -- where they will begin to weave the information into a plan.

Another topic Perry addressed at length was school safety.

"I think a lot of folks when they talk about student safety, they're just talking about the active shooter or the thing that would be in the most current news. But there's also other things that involve student safety that are even more likely to happen," Perry said.

He reminded board members of everything the schools do in terms of serving students, including transporting them to and from school, feeding them, and allowing them to participate in various activities and sports, such as football, volleyball and soccer.

Based on everything they do, schools are still the safest place to be, he said.

"We certainly don't take that for granted, and we work at that every single day to make sure that people are safe," Perry said.

He mentioned several measures the district has implemented that are focused on safety and security. Those measures include the ALICE training program that teaches employees how to respond in case of a threat of violence on campus. ALICE stands for alert, lockdown, inform, counter and evaluate.

Local law enforcement also has access to maps of the district's schools and has master keys that allow them access to the buildings if necessary, and the district is linked into a radio system that allows immediate contact with first responders in cases of emergency, Perry said.

The district has six school resource officers provided by the Rogers Police Department. Perry said it would be nice to have more but noted many police departments are struggling these days to maintain a full staff.