COMMENTARY | PIERS MARCHANT: Chef bearing the brunt of ‘The Bear’ 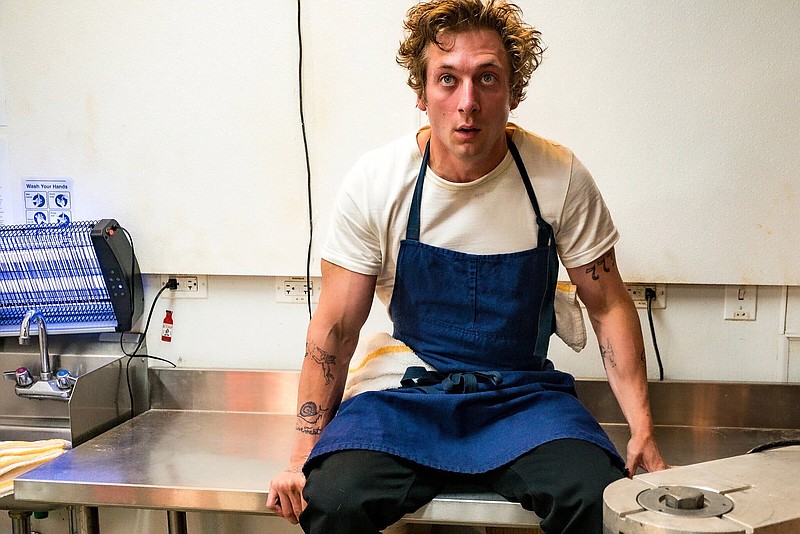 Jeremy Allen White plays a hotshot chef who returns home to Chicago to take over his family’s failing sandwich shop in the nervous-making, stress-inducing and dangerously true-to-life FX series “The Bear.”

I have a good friend in Arizona who used to be a chef. He spent his whole life in kitchens, first with his mom, and by his early teens, thrown into the tumult and madness of the restaurant variety. By the time I met him, in the early '90s, he was spending his time flipping between Tucson, where we worked at the same gourmet cafe, to Bisbee, where he had grown up, working his own catering company on the side.

On slow nights, when the blistering blast furnace heat of the day had settled into a comforting, breezy warmth, we'd sit on plastic chairs in the parking lot just outside the cafe, which was situated in the heart of a downtown that hadn't quite caught on yet, and he'd smoke, and we'd bust on each other and talk about food. Eventually, he let me cook with him a bit, and the owner, a fabulously outfitted blueblood from the horse farms of Virginia, felt confident in my abilities enough to situate me in the kitchen for small cooking assignments, making scones, putting together wild rice salad, and the like.

From there, my chef friend and I worked in several other kitchens together. I was mostly waiting tables, but from time to time, when things got weedy and they needed another hand on the prep line, I'd get called into the back and thrown an apron, allowed to be part of the kitchen staff for the night.

All of us were half-mad, of course, the waiters clogged with tables and patron demands ("I need extra sour cream!", "Does this soup have any nitrates?"), the dishwashers and busboys lost to the clanking steam of the back sinks, and the kitchen staff trying to hold it together as orders came piling in from all angles and sides. It was like trying to build a sandcastle with perfect turrets in the middle of a hurricane, from opening, to the moment the last plates went out, and everyone could finally breathe again, when we would quickly pour booze into our sweaty maws to fill the now empty void where all that stress had been.

The chefs at such joints are always the focal point of the storm, weathering the howling winds and whipping sand. Sometimes, I'd watch my friend from the corner of my eye as the orders piled up, and the energy of the kitchen became compressed and dense like the atmosphere just outside a black hole. It was like watching an egg in a microwave, anticipating those crucial seconds before the whole thing was going to have to explode.

It's that particular feeling I glommed onto early on in FX's surprisingly popular summer show, "The Bear" (all episodes now available on Hulu). The manner in which Carmy (Jeremy Allen White, evoking a young Dustin Hoffman), the young head chef who has returned to Chicago to take over his family's failing sandwich shop, The Original Beef of Chicagoland, after leading celebrated kitchens in renowned fine-dining restaurants in New York, keeps his head permanently on a swivel, anticipating everything and staying hyper-focused on the work, even as the kitchen and his misbegotten staff seem to disintegrate all around him.

In this first season's eight-episode arc, we don't see Carmy truly lose it until the penultimate episode -- easily the most stressful half-hour of any show you might watch this year -- when a new online ordering system goes haywire, allowing for hundreds of orders to come through at once, his sous chef quits on the spot, his pastry chef drops a sheet of doughnuts on the counter and heads out the door, and his "cousin," gets inadvertently stabbed in the upper buttock with a chef's knife.

Before that eruption, however, the notable thing about Carmy is his uncanny calm, running the kitchen with a kind of otherworldly, undisturbed stillness. Not detachment -- he's too much involved with everything happening at once to have that option -- but a sort of transfixion. It's the kind of thing you'd expect to see in a superstar QB, driving his team for a late, game-winning score. Leading the way, but somehow, not quite of the way.

It is a practiced ability to absorb dangerously high levels of stress radiation, and somehow not get burned to a crisp in the process. We only get one real look at Carmy's life in "the best restaurant in the world" in New York, as a sneering, domineering chef (expertly played by Joel McHale), leans over his shoulder and spits out withering takes on everything from Carmy's abilities to his smallish size ("You barely reach over this ... table," he opines. "You're terrible at this... you are talentless. You should be dead."). The fact that Carmy experienced such contempt and hostility, but tries valiantly not to treat his own staff with equal disdain (early on, he insists that everyone in the kitchen, from cooks to dishwashers, refer to each other as "chef," as a sign of respect) is one of his more endearing qualities.

That, and his seeming humility, after being saddled with this failing restaurant by his late older brother, Mikey (Jon Bernthal), the previous owner, after he shoots himself in the head on a Chicago city bridge one night. But Carmy isn't the only recipient of this raw deal. His sister, Sugar (Abby Elliott), not directly involved with the operation, is still on the hook for agreeing to co-sign on a massive loan for the place from their Uncle Jimmy (Oliver Platt), that Mikey had hoped would right the rutted ship. Then, there's Richie (a superb Ebon Moss-Bachrach), Mikey's former best friend, a scruffy screw-up who ran the place with him, suddenly feeling left on the outside looking in as Carmy brings in a new, very talented and opinionated sous chef, Sydney (Ayo Edebiri) to help reorganize the place.

Personal relationship dynamics factor greatly in the show's narrative, but show creator Christopher Storer never loses track of the galvanizing force in the middle of everyone's lives. In one scene, the camera lovingly sits over a frying pan, where Carmy is making a demi-glace, frying garlic and shallots in olive oil, adding capers, and white wine to reduce, and then stock, deglazing the pan, before adding a splash of lemon, and parsley, cooking it down as a flavorful sauce for a breaded cutlet, already plated. I don't eat meat, but even I could appreciate the fullness of that process, the ways in which flavors can bounce and ping off of each other to create a fulfilling greater whole.

As a metaphor, it also works nicely with the essence of a supporting cast, each a distinct, separate ingredient that adds to the richness of the dish. The show treats Carmy as the focal point, but just barely, which is a necessary move given his inscrutability. Sydney is a young, CIA-trained sous chef (that being the Culinary Institute of America, not the government agency), fresh from a financially devastating turn running her own catering company out of her parents' garage. Early on, trying to land a spot on the staff, she hands over a meticulous, far-reaching business assessment of the shop, which Carmy dismisses at first, but eventually reads carefully. She's a strong, resourceful chef in her own right, haunted by the mistakes that led her business to fail, and ready to commit to a cause she can fully get behind.

That's something else the show does exceptionally well, and certainly better than most shows that focus on a working kitchen. There's an almost cult-like aspect to kitchen work, an acceptance of outrageous stress and behavior we couldn't imagine going on in the regular outside world. Reading a book like Anthony Bourdain's infamous "Kitchen Confidential," with its bevy of lunatic chefs, screaming in the ears of their embattled sous, popping pills, booze, and cigarettes at all hours, and dealing with the unrelenting, grinding anxiety of producing at the very height of their powers night after night, it's difficult to comprehend why anyone would subject themselves to it.

Like the military, I suspect, there is companionship in chaos, camaraderie deep in the foxhole of grills and stoves, ablaze with activity. As the show progresses, we get to see more of the staff, once unwilling to adapt themselves, suddenly taking to the ownership of their stations, especially after Carmy and Sydney begin to employ a French Brigade hierarchy, in which every person has their own distinct responsibilities, answering to the sous in the process. We watch as Marcus (Lionel Boyce), the friendly pastry chef who started his culinary career in a McDonald's, comes to fully embrace the creative freedom and challenge of carefully crafted desserts; and Tina (Liza Colon-Zayas), an older Hispanic woman, the one most set against changing anything from their old, chaotic system, begins to take a new pride in what she makes, smiling to herself after a compliment from Sydney, after being taken to task for her technique for weeks, learning the incalculable joy of professional ascendancy.

It's those moments the show seems to get so right in the kitchen, but also outside of it. Carmy and Sydney barely have lives outside those patched together walls -- what we see of his apartment is bland to the point of oblivious (and in yet another spot-on detail, once home, he's content to have a dinner of a PB&J, some Doritos, and a Coke). Neither one of them can sleep: He wakes up one night hovering over his stove, having set fire to a bunch of frozen food he set to full heat; she restlessly jolts out of bed and scribbles a note to herself about a possible recipe combo she might use in the future. Often enough, both of them don't bother to get back to bed, but instead drag their clothes back on, and head back to the kitchen in the middle of the night, prepping for the coming day's onslaught. As insane as they are, for people like Carmy and Sydney, the kitchen is the only place they feel they have any sort of control.

I haven't spoken to my friend about this show, yet, but I suspect, stretched out in retirement, he would thoroughly enjoy it. As with like-minded shows such as "Barry," and "Better Call Saul," viewers have to come to terms with the entertainment value of feeling utterly stressed out. Watching Carmy and Sydney and Richie and the rest of the staff flail at one another as the world around them goes ablaze can be a harrowing experience, but, like the exquisite peace you get to feel at the end of a busy kitchen shift -- I'd never felt more entitled to a drink in my life -- there's something seductively addictive about the process.

Print Headline: Chef bearing the brunt of ‘The Bear’