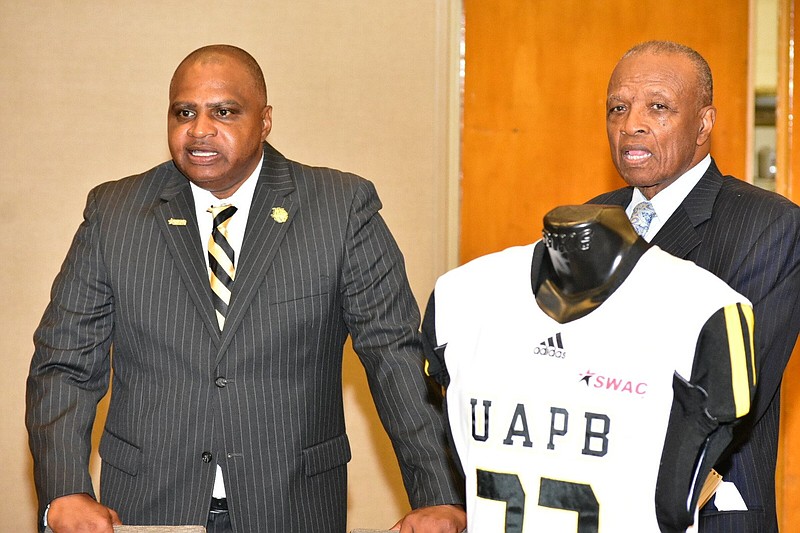 BIRMINGHAM, Ala. – Coming off a 2-9 record, predictions are the University of Arkansas at Pine Bluff football team won't do much better this season in the Western Division of the Southwestern Athletic Conference.

UAPB was picked fifth out of six teams in the division, with only Texas Southern University picked behind the Golden Lions. Southern University, which recently hired Eric Dooley away from Prairie View A&M University as head coach, received 11 of 22 first-place votes and earned 111 voting points to come away from Thursday's SWAC Media Day as the favorite.

But any pressure to disprove the naysayers isn't felt within the UAPB locker room.

The Golden Lions are going into 2022 with "nothing to lose," fifth-year left tackle Mark Evans II said.

The fifth-year senior from Houston was named preseason first-team All-SWAC offensive lineman, an honor very fitting for a three-time postseason All-SWAC and BOXTOROW HBCU All-American athlete. Evans has started every season of his career.

Thomas, a two-year letterman, is a punt and extra-point long snapper. He went the whole 2021 season without botching a snap.

True sophomore Athen Smith was placed on the preseason second team. Smith started 9 of 11 games as a freshman and had 3.5 sacks for a loss of 20 yards.