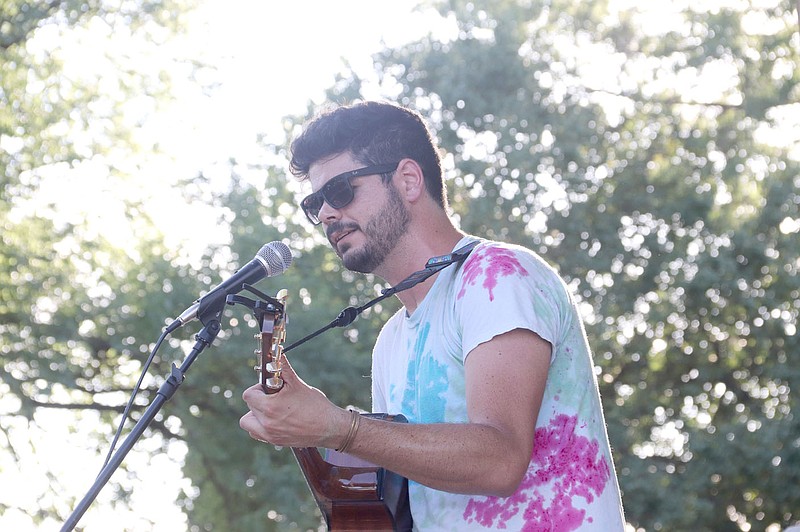 PRAIRIE GROVE -- The Prairie Grove Farmers Market is trying a Tuesday night market on a trial basis, and the first one on July 12 was considered a success, organizers said.

Prairie Grove City Council member Rick Ault, director for the market, said one of the vendors asked him about opening up the farmers market on an evening, and Ault said he asked her if she would like to organize and manage it.

Stephanie Higby, who runs Pig Trail Leatherworks along with her father, Marvin Rice, said a Tuesday night market from 6:30-8:30 p.m. offers another opportunity for vendors and for patrons.

She said she thought of the idea because temperatures have been so hot during the day and the heat affects vendors as well as those coming to shop at the market. She hopes that participation will increase even more as temperatures go down later in the summer and fall and is already thinking about some fall events to go along with the market.

Higby said she considered the first night a success with 16 vendors, some new for Prairie Grove, as well as new customers. Josh Stewart of Fayetteville provided live music.

"I've heard nothing but good things from everyone," Higby said about the first one. "This is in addition to Saturday mornings. We don't want to take away from Saturdays."

The Prairie Grove Farmers Market does not charge a vendor fee, and Higby said she appreciates being able to be a part of a free market.

She and her father started their Pig Trail Leatherworks business during the covid-19 pandemic and without a free farmers market she said they would not have been able to get started with their business.

"I'm very thankful to Kara [Ault] and Rick [Ault] for the farmers market," she added.

The farmers market on Saturday usually runs from 8 a.m. to noon. It is held adjacent to Mock Park between the Prairie Grove Historical Museum and the city's health fitness center on Buchanan Street.

Both the Saturday and Tuesday night markets are sponsored by Main Street Prairie Grove, a nonprofit organization with Ault as the director.