Take, for example, Historic Arkansas Museum's effort to acquire a rare 1828 Cherokee sampler made by Nancy Graves (whose Cherokee name was Ku-To-Yi) when she was 11 years old and a student at a Presbyterian school known as Dwight Mission on the Arkansas River near present-day Russellville. It's the earliest definitively dated Native American-made sampler known to exist in the United States, and was part of a private collection in California.

"I was sitting in a duck blind, bidding on that quilt, against the National Museum of the American Indian," said Swannee Bennett, retired director of Historic Arkansas Museum.

Bennett succeeded, although the outcome of his duck hunt at the time is not clear.

Stories of acquisitions contained in Historic Arkansas' two-volume "Arkansas Made" books (which document art and material culture created in Arkansas between 1819 and 1870) made for a lively discussion at a recent Quapaw Quarter Preservation Conversations gathering.

In a perfect world, museum curators find items of interest in the possession of collectors, antique dealers, or auction houses. They research the artifact to determine authenticity and to figure out if the asking price is appropriate. If a coveted object is being sold at an auction, curators must decide beforehand what the maximum bid will be. Diplomacy skills are paramount to success in the field.

Building a museum collection takes patience; sometimes months of negotiations are needed. Not every artifact will be available when the curator wants it. If a museum has a well-thought-out acquisitions plan and sticks to it, each year that museum's collection gets stronger.

"Arkansas Made," a fascinating chronicle of such acquisitions, was researched and written by Bill Worthen and Bennett, and originally published by the University of Arkansas Press in the early 1990s, with a second edition released in 2021.

There's never a dull moment when these characters get to swapping stories, aided with color commentary from Jennifer Carman, an independent art adviser, historian and accredited senior appraiser of American and European fine art and decorative arts.

Another engaging voice in the QQA conversation is that of Victoria Chandler, curator of collections at Historic Arkansas Museum and primary researcher of the Arkansas Made effort.

"We needed help with the 20th century, so we added Jennifer," said Bennett. "We didn't have the acumen to do it. Then Victoria put it all together."

That resulted in an expanded version of "Arkansas Made," published in 2021. It extends the period of study from prehistory into 1950 and includes some 1,100 professional and cottage artists.

"These are incredible books, the first of their kind published by the University of Arkansas Press," said Chandler. "Included are the results of a couple years of photo shoots alone, including at Historic Washington--1,300 images."

A valuable addition to the expanded 2021 publication discusses Louis and Elsie Freund, who established an art school in Eureka Springs and were instrumental in preserving and making that quirky mountain town a haven for writers and artists.

Mural painter Louis Freund, said Bennett, "did all the talking, got most of the attention. It was hard to get anything out of Elsie. She was a great artist," a studio art jeweler, watercolorist, weaver and textile designer.

"There's a bracelet from 1950 by Elsie Freund made of silver, glass, and clay, a striking notable artwork," said Carman. "She used broken glass in a clay body to make what she called stones, then suspended them in strands of copper, stones in the air, inspired by pebbles in a creek."

Another treasured component of "Arkansas Made" are quilts from the 19th century, like Crown of Thorns from Izard County.

"Quilting was one of the few ways that women of another era could express themselves creatively in the 19th century," said Chandler. "There are over 600 quilts in the museum's collection, often made to be given away [as gifts]."

According to the Arkansas Heritage website, most early quilts were not thrifty creations of hard-strapped settlers, but elegant, complex compositions that commemorated significant life events and were reserved for the family's best bed.

Most of the surviving 19th-century quilts were produced in the last quarter of the century by wives and daughters of independent yeoman farmers. Despite the demands of daily life, many Arkansas women found time to create some of the most exquisitely crafted quilts in the country.

Eighty percent of women in the Ozarks in 1950 said their favorite pastime was quilting. "You can plainly see the artistry," Chandler added.

Other "Arkansas Made" standouts include Benton-made Niloak pottery from 1905 crafted from kaolin, a very pure clay (Niloak is kaolin spelled backwards); silver spoons crafted before 1865 from silver dollars by Joe Neal, an enslaved artisan owned by the Whitaker family of Clark County; a series of 1880s-era hunting horns from Plum Bayou, an 1850 knife--Bowie No. 1--made of walnut and silver, attributed to James Black ("a steal at $32,000" from an auction of the collections of two prominent Texas knife collectors, said Bennett); 1,500 stunning portraits of Black Arkansans, and an oak lounge chair from 1949-1952 by Edward Durell Stone of Fayetteville.

That chair is one of Carman's favorite pieces. She says, "The chair embodies the essence of 'Arkansas Made' of the level of craftsmanship found in our state."

Which makes Bennett's point: "We are not a backwater." 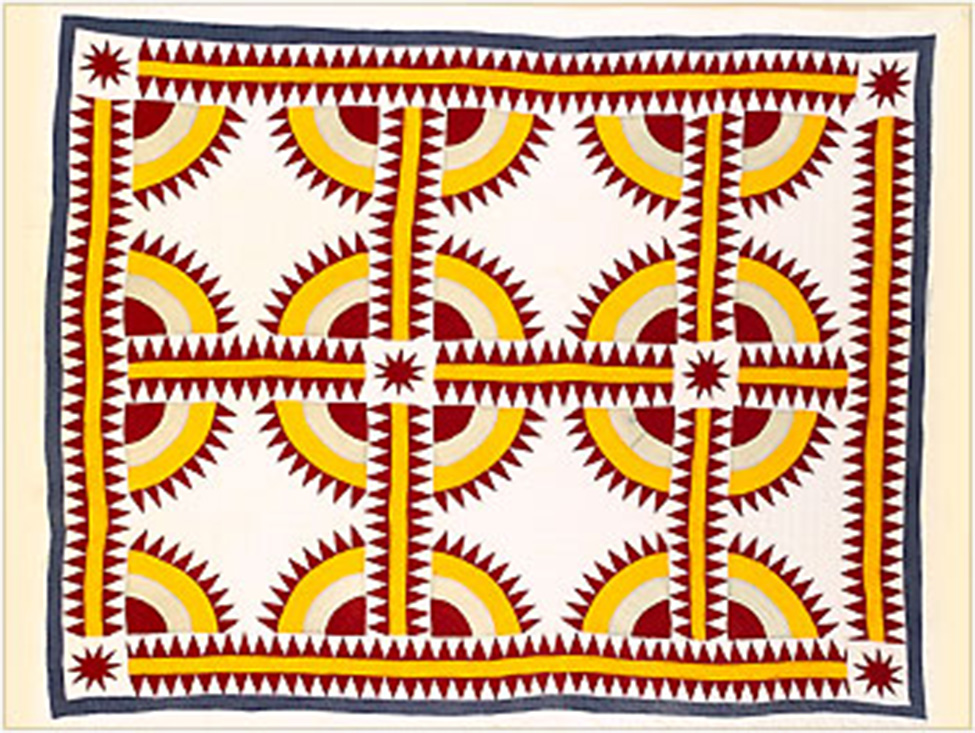 Quilts from the 19th century, like Crown of Thorns from Izard County, are featured in “Arkansas Made.” (Photo courtesy of Historic Arkansas Museum)