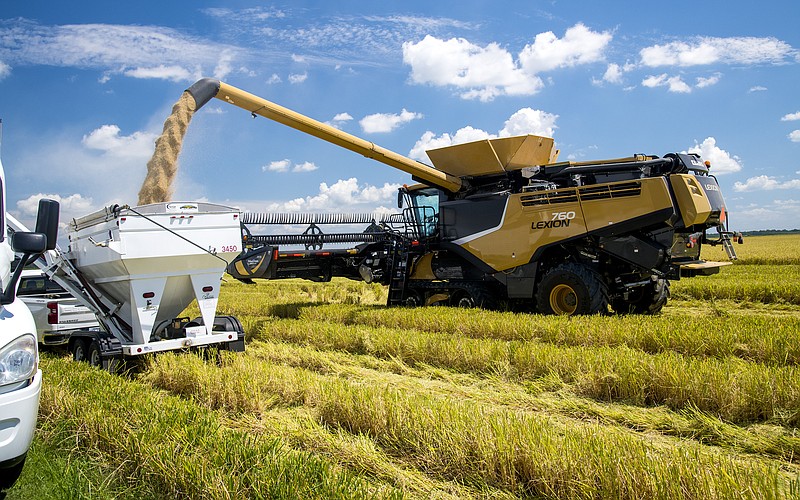 Heath Stephens and his crew harvest rice on the farm he operates in Arkansas County near Stuttgart with his father, John Stephens, in August 2020. Rice farmers and policymakers look to the International Rice Baseline Report produced by agricultural economists with the Arkansas Agricultural Experiment Station. (Special to The Commercial/Fred Miller/University of Arkansas System Division of Agriculture)

Baseline reports help set the guardrails for budgeting the bill, said John Anderson, head of the department of agricultural economics and agribusiness for the University of Arkansas System.

"Baseline is one of those things that sort of exists in the policy process under most people's radar," Anderson said. "Anything done policy-wise has to be done on a budget, and that budget doesn't come out of nowhere. It is derived from baseline expectations."

Every five years, Congress votes on a new Farm Bill to govern an array of agricultural and food programs. Congress approved the last Farm Bill in December 2018. While negotiations for the next Farm Bill are expected to begin in early 2023, policymakers are already getting input from stakeholders.

Policymakers primarily look to the Congressional Budget Office (CBO) for long-range supply and demand balance sheets and corresponding budget projections for all commodities to facilitate the Farm Bill's planning, according to John Newton, chief economist for the U.S. Senate Committee on Agriculture, Nutrition & Forestry.

While the CBO has its baseline numbers, Newton said the CBO compares numbers and considers information from the U.S. Department of Agriculture. The USDA chief economist's office contracts the Food & Agricultural Policy Research Institute (FAPRI) at the University of Missouri to provide the U.S. Agricultural Market Outlook for all agricultural commodities, foreign and domestic.

FAPRI, in turn, subcontracts the Arkansas Agricultural Experiment Station, the research arm of the University of Arkansas System Division of Agriculture, to develop U.S. and international rice market projections.

"With Arkansas being the nation's largest rice-producing state, the rice baseline reflects on-the-ground perspectives of farmers and station economists," Newton said. "So I think it's a highly respected and trustworthy baseline because it does reflect that grassroots perspective of what's happening in the rice industry."

Alvaro Durand-Morat, assistant professor of agricultural economics and agribusiness for the experiment station, is responsible for producing the International Rice Baseline Report.

The report is a 10-year outlook on global rice production and consumption, updated three times a year as a periodical publication. The next update will be in August.

Durand-Morat and his team use the Arkansas Global Rice Model to build the report. Arkansas stakeholders also use the model. For example, he said the model was used to analyze the impact of covid on the state's rice industry.

"It's a tool we always have available," Durand-Morat said. "We are preparing for a new baseline in August and calibrating the models for higher inflation rates because the model accounts for production and consumption. Anything that drives consumption -- GDP [gross domestic product] growth, inflation rate, exchange rates, population growth -- is accounted for in the model. We often recalibrate the model to account for those things."

"Fifty percent of our agricultural production goes overseas, so of course we need to look at what happens globally," Durand-Morat said. "We have 76 countries simulated in this Arkansas Global Rice Model."

Although Ukraine and Russia are not major rice producers or consumers, the war in Ukraine has impacted fertilizer and energy costs, Durand-Morat said.

"The work Alvaro and his team do is an integral part of our analysis of agricultural markets and policies," said Pat Westhoff, director of FAPRI. "They have the lead responsibility in developing our projections for rice markets in the U.S. and other countries."

FAPRI has similar arrangements with Texas Tech University and the University of Nevada Reno to compile information for markets outside the U.S.

"It's not as if we independently develop our estimates and then paste them together in a report," Westhoff said. "Instead, we go through an exhaustive process of passing numbers back and forth and eventually linking models to ensure all of our estimates are internally consistent."

Westhoff said it takes a week or more of an "intense joint effort" each time FAPRI puts together a new baseline to ensure they provide information the institutions can all stand behind.

That week of combined effort does not count the extended period each group spends preparing for the joint work or the time they spend preparing reports and sharing the information with policymakers, farmers and the public, Westhoff added.

Anderson said objectivity is a pivotal point when talking about baseline reports.

"This is an ongoing process," he said. "This gets updated all the time and gets attention around Farm Bill years, but this idea of knowing what resources have been committed and what resources are available to commit to these policy instruments is important, and there must be an objective assessment of what that budget looks like."