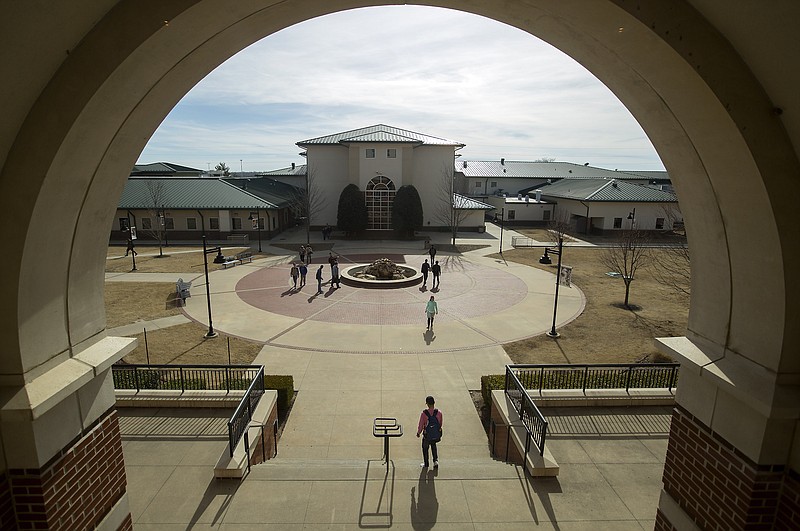 Students walk across campus at Northwest Arkansas Community College in Bentonville in this file photo.

BENTONVILLE -- All nine positions on Northwest Arkansas Community College's Board of Trustees will be up for election this November due to zone changes related to the 2020 census.

The candidate filing period begins at noon Aug. 3 and ends at noon Aug. 10. Candidates will be on the ballot during the general election Nov. 8.

Each board member represents a zone in the college's taxing district, which consists of the Bentonville and Rogers school districts. The zones were redrawn last fall based on population shifts demonstrated in the 2020 census, according to Grant Hodges, executive director of community and government relations. The resulting zones were finalized in early spring, he said.

Board members serve staggered six-year terms so three positions come up for election every two years, Hodges said. When the board convenes after the November election, the winners will draw for three two-year terms, three four-year terms and three six-year terms, he said.

The board positions are nonpartisan, Hodges said. Board members are primarily responsible for hiring the college president and also have oversight over the president, the budget and the college as a whole, he said. Their role is very similar to that of public school board members, he said.

Petition forms and notarized statements are available at the Benton County Clerk's Office in room 217 at 215 E. Central Ave., Bentonville. A map of the college's election districts is available online at nwacc.edu on the election information page.

Northwest Arkansas Community College's board chose in 1995 to be an elected board as opposed to one that's appointed by the governor. It's one of the few college boards in the state that's elected.

DeAnne Witherspoon, who represents Zone 2, is board president. She said Monday she wasn't certain whether she will run for reelection. She also said she was not aware of the intentions of any of the other eight trustees.

All but one of the current trustees has served for at least three years on the board.

The school is the largest two-year college in the state. Last year's fall semester enrollment was 7,037. The board this year approved a budget of about $41.9 million for fiscal 2023.

All nine positions on the board are up for election this fall. Here’s who holds each position and when they started in it:

Print Headline: All nine NWACC board positions up for election