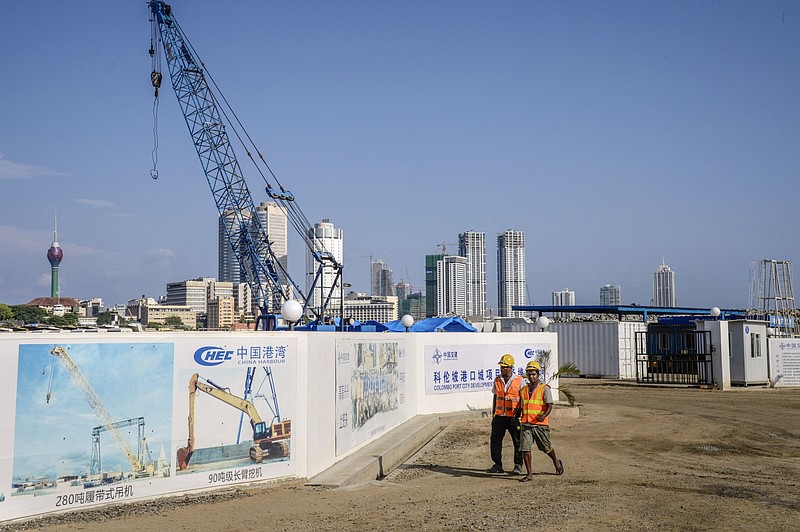 Workers walk past signs for the Colombo Port City, developed by China Harbour Engineering, a unit of China Communications Construction, in Colombo, Sri Lanka, on March 30, 2018. MUST CREDIT: Bloomberg photo by Atul Loke

China didn't finance any new projects in Russia, Sri Lanka and Egypt through its Belt and Road Initiative in the first half of this year, with that drop contributing to the continued slowdown in the money being spent on the project.

There was $28.4 billion in financing and investments for Belt and Road projects in the first six months of this year, down from $29.4 billion in the same period a year earlier, according to a study by the Green Finance & Development Center, an affiliate of Fudan University in Shanghai.

The Belt and Road started losing steam in 2017, after China strengthened capital controls to stem a slump in its own currency and an increasing number of overseas projects ran into trouble. The pandemic has exacerbated those issues, with countries in Asia and Africa especially struggling to repay loans or defaulting. That is reflected in the new data, which shows a 40% drop from the first half of 2019.

About $11.8 billion of China's Belt and Road engagement in the first half of the year went toward investments, and $16.5 billion went to construction contracts partly financed by Chinese loans. That took China's total financial engagement since the initiative's launch in 2013 to $931 billion, according to the report.

Energy and transport continued to be the focus of BRI in infrastructure, taking up 73% of overall spending in the first six month of this year, up from 63% a year ago. The largest share of funding went to the Middle East, which received a third of the total.

Saudi Arabia was the single largest recipient of investments, with about $5.5 billion in new funds, while Iraq received around $1.5 billion for construction. The Philippines and Serbia also got substantial new construction projects.

Russia remained the second-most-important partner for spending in the energy sector between 2013 and 2022 even though no fresh Belt and Road funds were added there from January to June. It was second behind Pakistan and followed by Iraq and Saudi Arabia.

President Xi Jinping announced in September last year that China plans to stop building new coal-fired power plants in other nations, a year after he pledged to make China carbon-neutral by 2060. The move could end one of the last sources of international funding for burning the dirtiest fossil fuel, as more than 70% of all coal plants built today rely on Chinese funding.

Spending on technology surged 300% and jumped 209% in the health sector in the first half of 2022, while investments in logistics, consumer products and agriculture fell.

China's Belt and Road program has been criticized by Western nations in recent years, with the United States and others accusing it of using "debt diplomacy" to make developing nations more dependent. China has denied those accusations, and the project has led to the development of needed infrastructure projects in some nations.

The United States resuscitated an initiative at the Group of Seven summit last month that's pitched as a direct alternative to the Chinese program. The "Partnership for Global Infrastructure and Investment" aims to fund projects in middle- and low-income countries to the tune of $600 billion over the next five years, mostly through private-sector investments with some funding from governments.