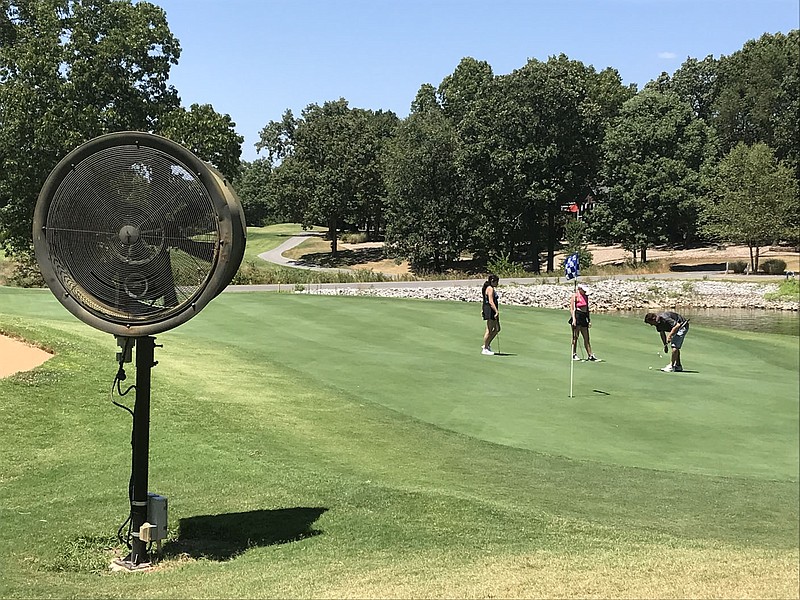 Highlands Golf Course is sporting new fans on some of its greens, like this one on the No. 9 hole. The fans, purchased from Chenal Country Club in Little Rock, move air across the greens to keep the grass from drying out. (NWA Democrat-Gazette/Bennett Horne)

The meeting was the first for newly appointed members Jerry Foster and Dave Armstrong. Foster, however, was ill and unable to attend.

The floods that hit Bella Vista in the spring of this year continue to haunt some of the association's golf courses, according to Director of Golf Maintenance Keith Ihms, who informed the committee of an ongoing weed battle that stems from the high water.

"In the valley, courses we're challenged with some weed control issues," he said. "Part of it's due to the flood. In places that got silt put on it, our [preemergence herbicide] doesn't work well in those areas. Some places we didn't get [preemergence herbicides] out because we were scheduled to do it at the time we got flooded, so we're struggling a little bit down there. And now it's going to be 100 degrees, and it's not a good idea to go out and spray post control, so we're living with some of that down there."

That battle, coupled with a fight against a greens fungus, has added to an already busy maintenance schedule.

"The other thing that's quite noticeable, not so much from a putting standpoint -- yet -- but aesthetically, is we're having a fungus issue that we have every year," Ihms said. "It's big round circles that will turn off colors on greens. There are quite a few of them on Country Club, and we probably have some on Berksdale. That is also a timing issue more than likely. If you don't get the product out within a window sometimes you don't get effect."

Ihms said this fungus is one of about 74 variations that attack greens.

"There seems to be a different one every year," he said. "This one's different than any we've had before. What we put out for the old ones works. So, it's a 'chase' thing."

"We're doing that with limited staffing to hand water, which compounds the problem when it's dry because it dries out and doesn't take in water," Ihms said. "The sprinkler head will not handle it, and it has to be done by hand. So we get a little bit behind and would like to have some rain."

In the meantime, he said golfers can "expect a little more hand watering and maybe some overheads ahead" while they are on the courses. "If we get to a bad spot and can't get hand watering in there we're going to turn on the sprinklers," he added.

Fans on various greens, including the addition of several used fans, are helping by moving air around the greens.

"Highlands is probably the best of all of them because we've changed out some of those old chicken fans with some newer, bigger fans, and there's a lot more air moving across there," he said. "Air movement is the key."

Several fans were recently purchased from Chenal Country Club in Little Rock, which no longer needed them after making the move to a different type of grass.

"I talked to the contractor today, and he said it's going to be the end of August before he can get here," Ihms said, "which is probably not a bad thing because trying to put grass down now would be kind of difficult. That was a 2021 capital project that was not completed."

Ihms reported that progress continues on removing the old bridge by hole No. 2 on Berksdale Golf Course while a new electronic screen will have to be purchased to replace one broken by vandals at the Country Club Golf Course pump house.

"The Bella Vista pump house, just to throw a little more excitement into our day, got broken into the week before Fourth of July," he said. "They broke the screen on a controller that controls that whole system. We thought we could get just a little $150 screen with a plug in and put it in, but it's going to be about a $10,000 repair. And it's on order. We can still operate the system, but we cannot adjust pressures, we cannot tell where faults are, it won't shut itself off when we have a leak now, so if a [sprinkler] head blew out on a green it won't shut off now. So we're in the process of getting that done."

He added, "We did file a report, but with our deductible it's not worth it."

Ihms concluded his report with updated information on the road and bridge improvements being made to Arkansas 340/West Lancashire Boulevard, which cuts through the Country Club Course.

"The 340 project, which is interrupting how we play those holes, the contractor told me he fully expects to give that back to us in December," he said. "So hopefully next year we'll have that all back. This dry weather helps him."

Before adjourning, the committee voted in Ruth Hatcher as chairman, Jeff Hendren as vice-chairman and Mark Deihl as secretary.

The committee's next meeting is scheduled for 4 p.m. Aug. 10 in the association's boardroom.