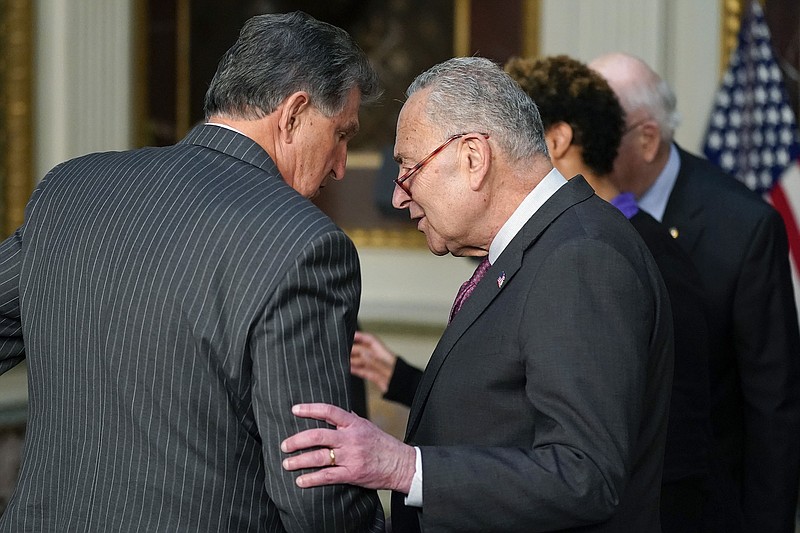 Sen. Joe Manchin and Senate Majority Leader Charles Schumer confer earlier this year in Washington. An agreement announced Wednesday by Manchin and Schumer would entail roughly $433 billion in new spending, most of it focused on climate change and clean energy production. (AP/Patrick Semansky)

The new agreement, brokered between Manchin and Senate Majority Leader Chuck Schumer, D-N.Y., opens the door for party lawmakers to try to advance the measure in the coming weeks. It caps off months of fierce debate, delay and acrimony, a level of infighting that some Democrats saw as detrimental to their political fate ahead of this fall's critical elections.

Under the deal, Schumer secured Manchin's support for roughly $433 billion in new spending, most of which is focused on climate change and clean energy production -- the largest such investment in U.S. history. The Democrats coupled the spending with provisions that aim to lower health care costs for Americans, chiefly by allowing Medicare to begin negotiating the price of select prescription drugs on behalf of seniors.

To pay for the package, Manchin and Schumer also settled on a flurry of changes to tax law that would raise $739 billion over the next decade -- enough to offset the cost of the bill while securing more than $300 billion for cutting the deficit, a priority for Manchin. Democrats sourced the funds from a series of changes to tax law, including a new minimum tax on corporations and fresh investments in the Internal Revenue Service that will help it pursue tax cheats.

The agreement also contains $288 billion the government would save from curbing pharmaceutical prices, $124 billion from beefing up IRS tax enforcement and $14 billion from taxing some "carried interest" profits earned by partners in entities like private equity or hedge funds.

The measure would spend $369 billion on energy and climate change initiatives and $64 billion to extend federal subsidies for three more years for some people buying private health insurance. Those subsidies, which lower people's premiums, would otherwise expire at the end of this year.

The deal also claims to gain $124 billion from beefing up IRS tax enforcement, and $14 billion from taxing some "carried interest" profits earned by partners in entities like private equity or hedge funds.

The measure would spend $369 billion on energy and climate change initiatives. These include consumer tax credits and rebates for buying clean-energy vehicles and encouraging home energy efficiency; tax credits for solar panel manufacturers; $30 billion in grants and loans for utilities and states to gradually convert to clean energy; and $27 billion to reduce emissions, especially in lower-income areas.

It would also aim $64 billion at extending federal subsidies for three more years for some people buying private health insurance. Those subsidies, which lower people's premiums, would otherwise expire at year's end.

That would leave $306 billion for debt reduction, an effort Manchin has been demanding. While a substantial sum, that's a small fraction of the trillions in cumulative deficits the government is projected to amass over the coming decade.

Taken together, the package represents more than some Democrats once thought they might win from Manchin, who repeatedly has raised fiscal concerns with his own party's ambitions. Only two weeks earlier, the moderate from West Virginia, a coal-heavy state, signaled his opposition to new climate investments out of concern that spending increases, funded in part by tax hikes, could harm the economy and worsen inflation.

"This is the most significant action we've taken on climate, that we will take on climate and clean energy, ever," said Sen. Tina Smith, D-Minn., who had led Democrats on a plan that would have punished polluters in the electricity sector before Manchin blocked it.

But the new agreement still totals significantly less than Democrats had hoped to achieve through the more sweeping, roughly $2 trillion initiative known as the Build Back Better Act. Manchin scuttled his party's proposed overhaul to the country's health care, education, climate, immigration and tax laws last December, angering Democrats, who passed a version of the bill in the House. Manchin described that since abandoned plan in defiant terms Wednesday.

"For too long, the reconciliation debate in Washington has been defined by how it can help advance Democrats' political agenda called Build Back Better," Manchin said in a lengthy statement, referring to Democrats' initial, larger spending package that bore Biden's 2020 campaign slogan.

"Build Back Better is dead, and instead we have the opportunity to make our country stronger by bringing Americans together," Manchin said. "I will do everything I can to usher in a new era of compromise and common sense that will make America more energy secure, financially sound and a more united country for this generation and the next."

Biden, meanwhile, described the legislation as "historic," stressing in a statement: "This is the action the American people have been waiting for." The White House had issued its own ultimatum earlier this month, stressing that if Congress didn't act on climate change, then Biden would issue executive orders to address the issue.

"This addresses the problems of today -- high health care costs and overall inflation -- as well as investments in our energy security for the future," Biden said.

With an agreement in hand, Schumer soon set about briefing members of his party on the bill, dubbed the Inflation Reduction Act of 2022. It came as a surprise to many Democratic lawmakers, illustrating the tumultuous and secretive negotiations between Schumer and Manchin, which have spanned months.

From here, Schumer aims to finalize the proposal and advance it through the process known as reconciliation. The tactic allows Democrats to band together and move their spending bill through the narrowly divided Senate using their 50 votes and Vice President Kamala Harris' tiebreaking power, sidestepping Republicans' opposition and filibuster. Then, the fate of the president's agenda falls on the House, where Speaker Nancy Pelosi, D-Calif., similarly has a razor-thin majority -- and little room for error in keeping her fractious caucus together around a scaled-back bill.

That dynamic long has afforded Manchin immense leverage in the talks, which once began with rosy hopes that Democrats could remake vast swaths of the economy, backed by as much as $6 trillion in spending. Even as Biden looked to "Build Back Better," Manchin maintained a fiscally cautious disposition, recently point to the country's record-high inflation as reason for restraint.

In the latest twist this month, Manchin essentially issued his party an ultimatum: He said Democrats could omit climate spending and pass a small bill in July, or they could try again on a more encompassing package if economic indicators showed improvement in the months to come. The senator later stressed that he supports efforts to respond to global warming, though his demands left Democrats seething, fearing the costs of inaction for the planet would be dire and deadly.

Publicly, Schumer and top Democrats opted to prioritize a smaller proposal, settling on a health-care package Manchin could support. Behind the scenes, though, the Democratic leader continued to advocate for climate spending. Suddenly, late Wednesday, he and Manchin announced the early contours of their agreement: tax credits and other proposals that aim to lower energy costs, increase clean energy production and reduce carbon emissions roughly 40% by 2030.

"There's no better time to announce an important deal on a climate emergency than when you're in the middle of a heat wave," said Sen. Chris Van Hollen, D-Md., briefed late Wednesday on the plan. "A lot of us were very worried we wouldn't get anything on this front."

Sen. John Cornyn, R-Texas, said the Democratic agreement would be "devastating to American families and small businesses. Raising taxes on job creators, crushing energy producers with new regulations, and stifling innovators looking for new cures will only make this recession worse, not better."

The accord came in part because Schumer, Pelosi and Biden also agreed to seek and pass new legislation easing the federal permitting rules for pipelines and other infrastructure in the coming months. Such regulatory changes have to be tackled separately from Democrats' spending package, given the rules under which lawmakers hope to advance their forthcoming bill. Manchin has in particular prioritized a drilling project in Alaska and a natural gas pipeline that runs through West Virginia.

"Our persistent and increasing dependence on foreign energy and supply chains from countries who hate America represents a clear and present danger and it must end," Manchin said in a statement.

To further win his support, some Democratic senators in recent days also sought an intervention from Larry Summers, the former Treasury secretary who has been sharply critical of Biden's earlier stimulus law, according to two people familiar with the matter, who spoke on the condition of anonymity to describe private conversations. Summers was among the economists who first warned that inflation would rise.

The two men spoke this week, and Manchin listened as Summers talked in detail about why Democrats' proposed economic package -- including its energy provisions -- would not lead to higher prices, the people said. Manchin has on occasion consulted with Summers throughout the last year, and the senator's allies have been adamant that his views have been consistent throughout the negotiations. A spokeswoman for Summers declined to comment.

On health care, meanwhile, Schumer secured Manchin's support for a three-year extension of tax credits that help lower health insurance costs for roughly 13 million Americans. Without congressional action, these individuals would have seen premium increases next year on plans purchased through insurance exchanges, a financial headache for families and a political conundrum for Democrats sensitive to price hikes.

The deal also would allow Medicare for the first time to negotiate the price of drugs, a policy Democrats have campaigned on for years. And it further includes a $2,000 annual cap for seniors on their out-of-pocket spending for prescription drugs.

Democrats had resigned themselves to passing a narrow package aimed at lowering the cost of prescription drugs and extending expanded Affordable Care Act subsidies before leaving for the August recess, after Manchin privately told party leaders this month that he would not support any climate or tax proposals in the short term.

Still, the health care proposals are a significant departure from the once-in-a-generation remake of insurance that some Democrats wanted. Initially, lawmakers sought a major expansion of Medicare and other new benefits for seniors, and they labored to close the gap that threatens to keep millions of low income Americans from being able to afford care at all. But they had to abandon their plans to satisfy Manchin's broader cost concerns, though Democratic leaders were quick to stress Wednesday they would not give up over the long term.

"In light of the discussions of the past year, this agreement is a remarkable achievement," Pelosi said in a statement. "We will continue to fight for priorities not contained in this legislation, because more must be done on behalf of America's working families and to save the planet."

Democrats had to make similar sacrifices to win Manchin's support on other measures, including those meant to cover costs and reduce the deficit. The deal omits the major tax increases on wealthy Americans and corporations that Biden himself had endorsed entering the 2020 election, but it does impose a 15% minimum on companies, aiming to crack down on those that pay nothing to the federal government.

"Rather than risking more inflation with trillions in new spending, this bill will cut the inflation taxes Americans are paying, lower the cost of health insurance and prescription drugs, and ensure our country invests in the energy security and climate change solutions we need to remain a global superpower through innovation rather than elimination," Manchin said.

Information for this article was contributed by Jeff Stein, Rachel Roubein and Maxine Joselow of The Washington Post along with Alan Fram, Matthew Daly, Will Weissert, Kevin Freking and Seung Min Kim of The Associated Press and Emily Cochrane of The New York Times.