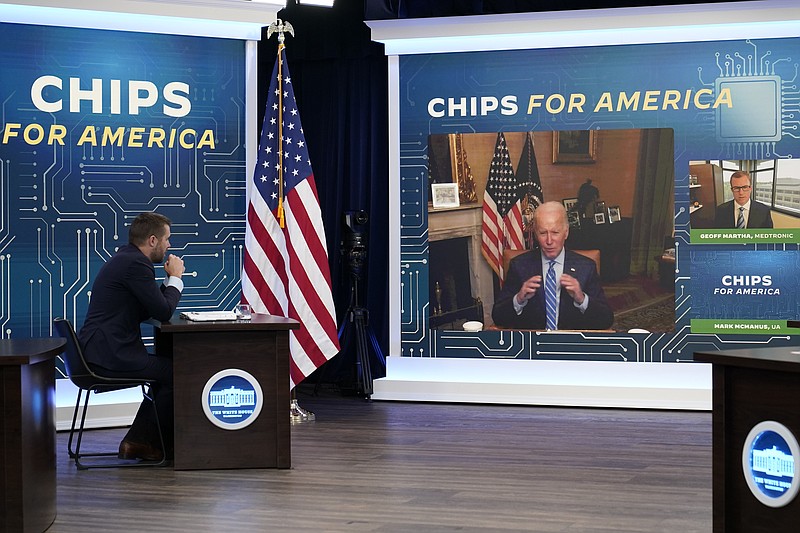 President Joe Biden speaks virtually during an event in the South Court Auditorium on the White House complex in Washington, Monday, July 25, 2022. Biden, who continues to recover from his coronavirus infection, spoke virtually with business executives and labor leaders to discuss the Chips Act, a proposal to bolster domestic manufacturing. (AP Photo/Susan Walsh)

WASHINGTON -- The House on Thursday passed a $280 billion package to boost the semiconductor industry and scientific research in a bid to create more high-tech jobs in the United States and help it better compete with international rivals, namely China.

The House approved the bill by a solid margin of 243-187, sending the measure to President Joe Biden to be signed into law and providing the White House with a major domestic policy victory. Twenty-four Republicans voted for the legislation.

"Today, the House passed a bill that will make cars cheaper, appliances cheaper and computers cheaper," Biden said. "It will lower the costs of every day goods. And it will create high-paying manufacturing jobs across the country and strengthen U.S. leadership in the industries of the future at the same time."

As the vote was taking place, Biden was discussing the economy with CEOs at the White House. During the event, he was handed a note informing him it was clear the bill would pass -- a development that produced a round of applause before the tally was final.

Republicans argued the government should not spend billions to subsidize the semiconductor industry and GOP leadership in the House recommended a vote against the bill, telling members the plan would provide enormous subsidies and tax credits "to a specific industry that does not need additional government handouts."

Rep. Guy Reschenthaler, R-Pa., said the way to help the industry would be through tax cuts and easing federal regulations, "not by picking winners and losers" with subsidies -- an approach that Rep. Joseph Morelle, D-N.Y., said was too narrow.

Some Republicans viewed passing the legislation as important for national security. Rep. Mike McCaul, the top Republican on the House Foreign Affairs Committee, said it was critical to protect semiconductor capacity in the U.S., which he said was too reliant on Taiwan for the most advanced chips. That could prove to be a major vulnerability should China try to take over the self-governing island that Beijing views as a breakaway province.

"I've got a unique insight in this. I get the classified briefing. Not all these members do," McCaul said. "This is vitally important for our national security."

The bill provides more than $52 billion in grants and other incentives for the semiconductor industry as well as a 25% tax credit for those companies that invest in chip plants in the U.S. It calls for increased spending on various research programs that would total about $200 billion over 10 years, according to the Congressional Budget Office.

A late development in the Senate -- progress announced by Wednesday night by Democrats on a $739 billion health and climate change package -- threatened to make it harder for supporters to get the semiconductor bill over the finish line, based on concerns about government spending.

Rep. Frank Lucas, R-Okla., said he was "disgusted" by the turn of events on Capitol Hill.

Despite bipartisan support for the research initiatives, "regrettably, and it's more regrettably than you can possibly imagine, I will not be casting my vote for the Chips and Science Act today," he said.

Leading into the vote, it was unclear whether any House Democrats would join with Sen. Bernie Sanders, I-Vt., in opposing the bill; in the end, none did.

Commerce Secretary Gina Raimondo talked to several of the most progressive members in a meeting before the vote, emphasizing that the proposal was a critical part of the president's agenda and that Democrats needed to step up for him at this important moment. 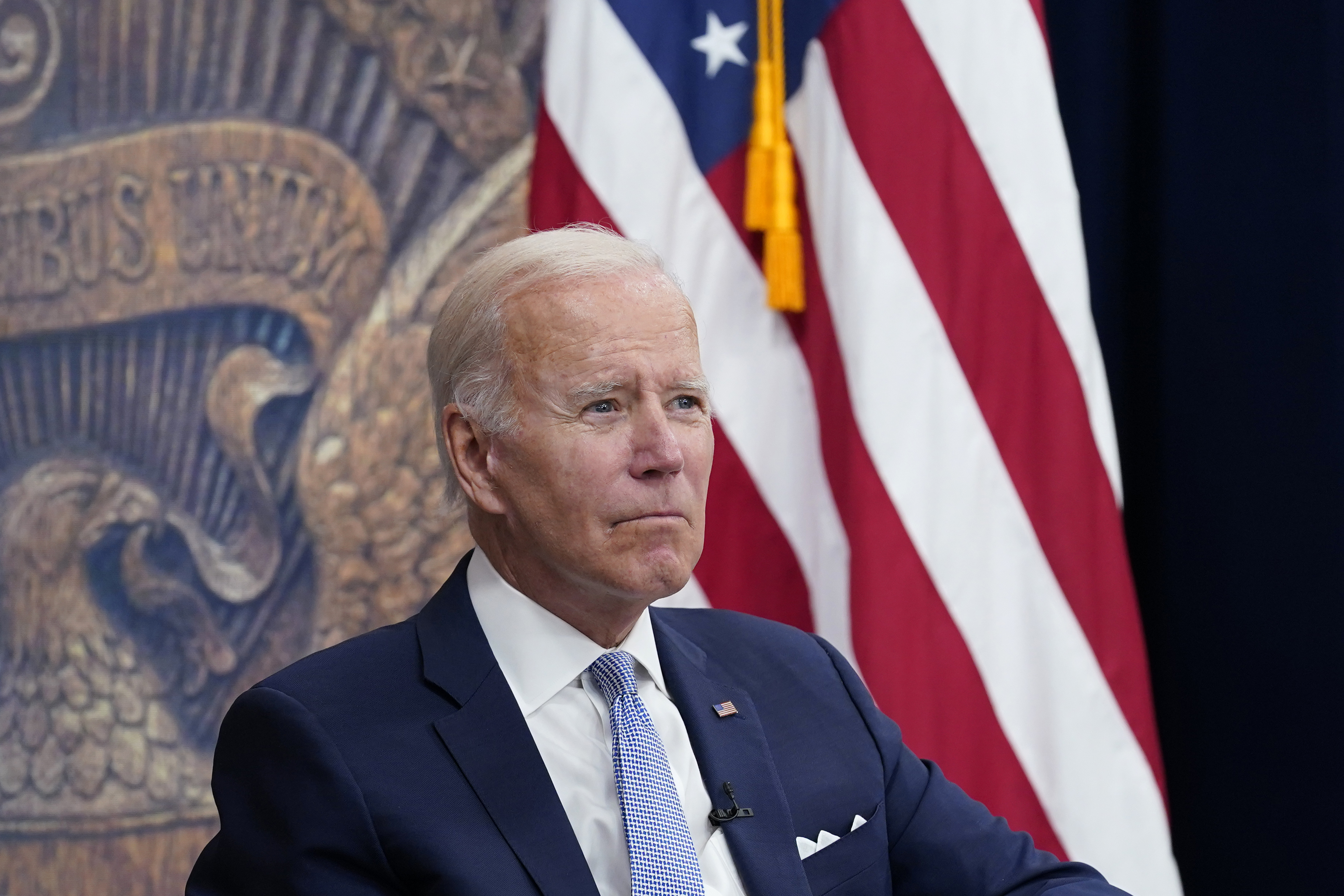 President Joe Biden listens during a meeting with CEOs in the South Court Auditorium on the White House complex in Washington, Thursday, July 28, 2022. Biden was updated on economic conditions across key sectors and industries. (AP Photo/Susan Walsh) 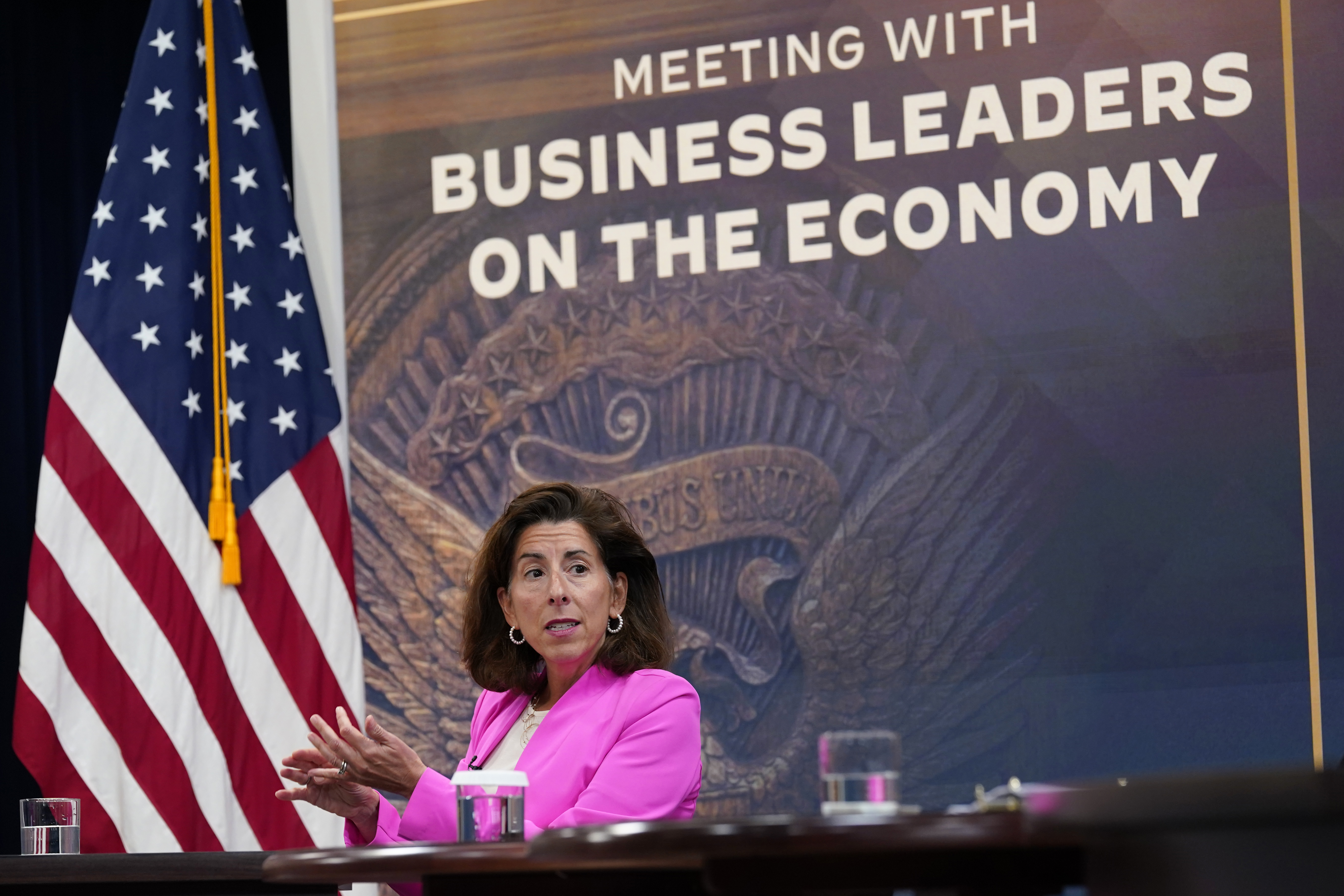 Commerce Secretary Gina Raimondo speaks during a meeting with CEOs in the South Court Auditorium on the White House complex in Washington, Thursday, July 28, 2022. President Joe Biden participated in the meeting and was updated on economic conditions across key sectors and industries. (AP Photo/Susan Walsh)