Protesters slam Doctrine of Discovery before papal Mass by ROB GILLIES and NICOLE WINFIELD The Associated Press | July 29, 2022 at 4:22 a.m. 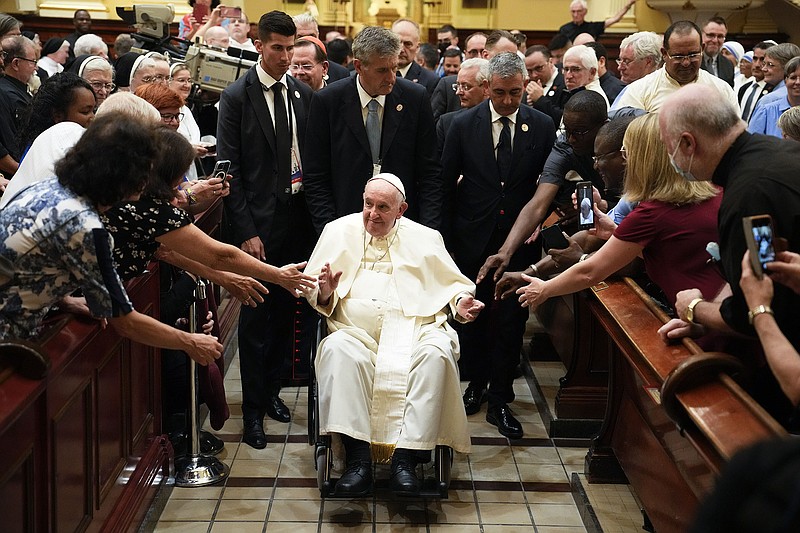 Pope Francis goes to pray at the remains of Saint Francois De Laval on Thursday after presiding over a vespers service at the Cathedral-Basilica of Notre Dame de Quebec in Quebec City, Quebec. More photos at arkansasonline.com/729francis/. (AP/John Locher)

ST-ANNE-DE-BEAUPRE, Quebec -- Pope Francis celebrated Mass on Thursday at Canada's national shrine and came face-to-face with a long-standing demand from Indigenous peoples: to formally rescind the papal decrees underpinning the so-called "Doctrine of Discovery" that legitimized the colonial-era seizure of Native lands and resources.

Right before Mass began, two Indigenous women unfurled a banner at the altar of the National Shrine of Sainte-Anne-de-Beaupre that read: "Rescind the Doctrine" in bright red and black letters. The protesters were escorted away and the Mass proceeded without incident, though the women later marched the banner out of the basilica and draped it on the railing.

The brief protest underscored one of the lingering issues facing the Holy See after Francis' historic apology for the Catholic Church's involvement in Canada's notorious residential schools, where generations of Indigenous peoples were forcibly removed from their families and cultures to assimilate them into Christian, Canadian society. Francis has spent the week in Canada seeking to atone for the trauma and suffering of First Nations, Metis and Inuit peoples.

Beyond the apology, Indigenous peoples have called on Francis to formally rescind the 15th-century papal decrees, or bulls, that provided European kingdoms the religious backing to expand their territories for the sake of spreading Christianity. Those decrees have been seen as underpinning the Doctrine of Discovery, a legal concept coined in a 1823 U.S. Supreme Court decision that has come to be understood as meaning that ownership and sovereignty over land passed to Europeans because they "discovered" it.

Prime Minister Justin Trudeau cited the need for the Holy See to "address the Doctrine of Discovery," as well as other issues including the return of Indigenous artifacts in the Vatican Museums, in his private talks with Francis on Wednesday, Trudeau's office said.

Several Christian denominations in recent years have formally repudiated the Doctrine of Discovery. The umbrella organization of U.S. female Catholic religious orders, the Leadership Conference of Women Religious, formally asked Francis to do so in 2014, saying he should repudiate "the period of Christian history that used religion to justify political and personal violence against Indigenous nations and peoples and their cultural, religious and territorial identities."

Murray Sinclair, the First Nations chairman of Canada's Truth and Reconciliation Commission, cited the doctrine in a statement this week welcoming Francis' apology but calling on him to take responsibility for the full role of the church in the Canadian residential school system.

"Driven by the Doctrine of Discovery and other church beliefs and doctrines, Catholic leaders not only enabled the government of Canada, but pushed it even further in its work to commit cultural genocide of Indigenous peoples," Sinclair said.

Church officials have insisted those papal decrees have long since been rescinded or superseded by other ones fully recognizing the rights of Indigenous peoples to live on their lands, and say the original bulls have no legal or moral bearing today. During the trip, Francis has repeatedly reasserted those rights and rejected the policies of assimilation that drove the residential school system.

But the Vatican and Canadian trip organizers have confirmed that a new statement is being prepared to address demands for a current, formal repudiation, though it is not expected to be released during Francis' visit.

"The Vatican has clarified that the papal bulls associated with the Doctrine of Discovery have no legal or moral authority in the Church," Neil MacCarthy, in charge of communications for the papal visit, told The Associated Press in an email. "However, we understand the desire to name these texts, acknowledge their impact and renounce the concepts associated with them."

Asked about the protest Thursday, MacCarthy said: "We recognize that there are very passionate feelings about a number of issues, including the Doctrine of Discovery. The brief peaceful protest did not disrupt the service and the group had a chance to express their concerns."

The service incorporated many Indigenous elements and peoples, including an emotional moment when a woman in Native dress wept in front of Francis as she brought him the offertory gifts. Francis didn't mention the doctrine issue in his homily, which spoke in general terms about reconciliation and the need for hope. 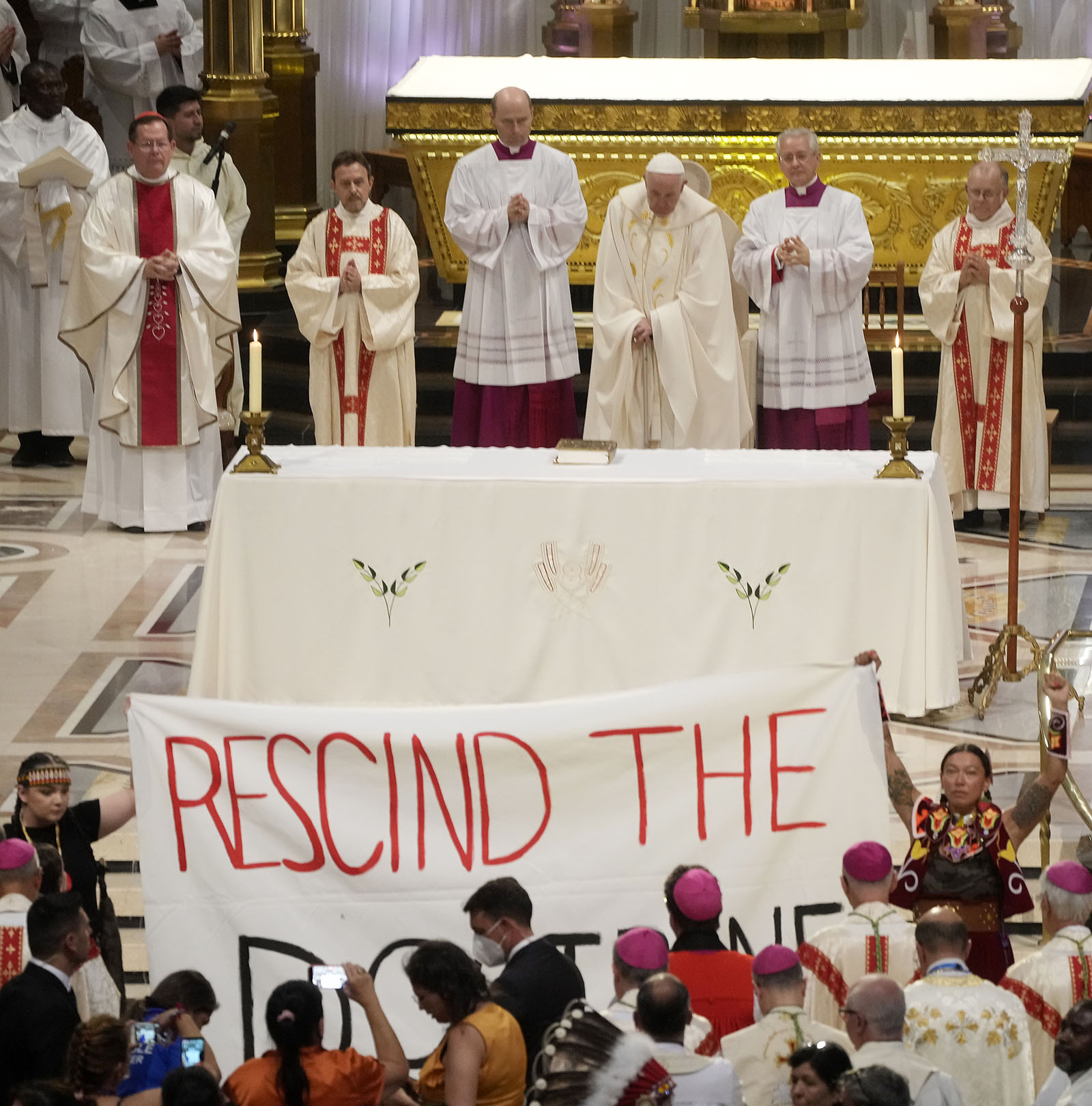 Two Indigenous women unfurl a protest banner Thursday at the National Shrine of Saint Anne de Beaupre in Quebec City before the start of a Mass by Pope Francis. (AP/Gregorio Borgia)