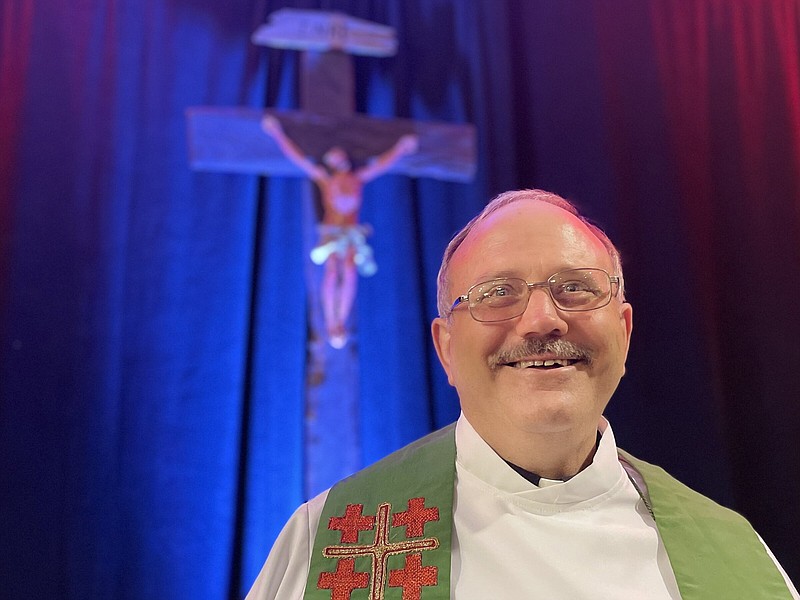 Father Norbert Rappold, pastor of St. Peter the Fisherman Catholic Church in Mountain Home, stands in front of the crucifix that hung above the altar during this year’s Arkansas Catholic Charismatic Conference in North Little Rock. Rappold, a longtime member of the Charismatic movement, said that the power of Pentecost is available to Christians today. (Arkansas Democrat-Gazette/Frank E. Lockwood)

Other than the crucifix and the statue of the Virgin of Guadalupe, the gathering at a North Little Rock hotel Sunday looked a lot like a traditional Protestant Pentecostal service.

Catholic worshippers wept. They lifted their hands heavenward. They spoke in unknown tongues. They fell to the ground as if fainting during prayer, a practice their Protestant cousins refer to as being “slain in the Spirit.” They engaged in what some call “Holy Laughter,” though they referred to it simply as “the joy of the Lord.” Others delivered what conference organizers referred to as a “Word from the Lord,” messages believed to have come from God himself so that they could be shared with His people.

The gathering of roughly 200 Catholics, which was sponsored by Arkansas Catholic Charismatic Renewal Services, has the blessing of the Diocese of Little Rock.

It’s part of a worldwide movement that began in Protestant circles more than a century ago, but spread to the Catholic church in the 1960s and 1970s, eventually gaining support from Pope Paul VI himself.

Today, it is embraced by millions of Catholics around the globe and enjoys the backing of Pope Francis.

“The Charismatic Renewal, which developed in the Church by the will of God, represents, to paraphrase Saint Paul VI, ‘a great opportunity for the Church,’” the current pope told an audience in June 2019.

The manifestations that were on display at the North Little Rock conference are scriptural, supporters say, pointing to accounts of the early New Testament church contained in the Acts of the Apostles and in some of the Apostle Paul’s letters.

Before ascending into heaven, John’s gospel says, Jesus promised that he would send his disciples an advocate, comforter or counselor he labeled “the Spirit of truth” and that it would remain with them forever.

That promise, Christians believe, was fulfilled on Pentecost, when Jesus’ followers heard a sound from heaven like a mighty wind. It filled the entire house where they had gathered, accompanied by what looked like “tongues of fire” that rested on their heads.

As it happened “They were all filled with the Holy Spirit and began to speak different languages as the Spirit gave them power to express themselves,” Acts 2:4 declares in the New Jerusalem Bible translation.

At the start of the 20th century, most Protestant leaders were “cessationists,” believing that the supernatural gifts outlined in Acts had “ceased” to exist after the Apostolic age.

Reports in 1906 of people “speaking in tongues” at Los Angeles’s Azuza Street revival, and elsewhere, generated great interest — and considerable skepticism as well.

Protestant ministers who claimed to have received the gifts were run out of their churches, in many instances, branded as heretics and holy rollers.

But the movement ended up touching every corner of the globe.

Today, the Assemblies of God, a Pentecostal denomination or “fellowship” founded on Hot Springs in 1914, has more than 3.2 million U.S. members and adherents — more than the Presbyterian Church USA and the Episcopal Church USA combined.

And the movement is flourishing among American Catholics as well, who believe that the gifts of the Spirit are available today; Charisma is a Greek word meaning “favor,” “grace” or “gift.” Father Norbert Rappold, pastor of St. Peter the Fisherman Catholic Church in Mountain Home, says the Holy Spirit enabled Jesus’ disciples to spread the Gospel far and wide.

“The Lord zapped me,” she said, “and I felt … a power and a love that I’d never felt before and I really didn’t know what it was,” she said.

“I’ve always been Catholic, always been deeply devout in my faith, always been active in the church. But when this happened, it was like walking from a black-and-white existence into Technicolor. It was that different,” she said.

“The feelings of love and peace were so overwhelming. I just laid there for the longest time. … It was just like I had a blanket of love over me,” she said.

The baptism also energized her spiritual life, she said.

“When I first entered the renewal and was baptized in the Spirit, I really felt like I had a hunger for scripture. I wanted to read, and I wanted to hear,” she said.

She also desired, she said, to separate herself from “the things of the world that were keeping me from having a close relationship with Christ, and it gave me a hunger to be in church.”

In Acts 1:8, Jesus promised his followers: You will receive power when the Holy Spirit comes upon you, and you will be my witnesses in Jerusalem, throughout Judea and Samaria, and to the ends of the earth.” That gift, Williams said, remains available today.

“If you’re not aware of what the Holy Spirit is providing for you and helping you in your daily life, then you’re missing out on a lot,” Williams said.

Rappold, the priest who serves as a liaison for Catholic charismatic renewal in the diocese, said the power of Pentecost remains life-changing today and isn’t hindered by denominational lines.

“We claim our Protestant brothers and sisters; they don’t always claim us,” he said. “There’s only one Lord, one faith, one baptism, one God and father of us all.”