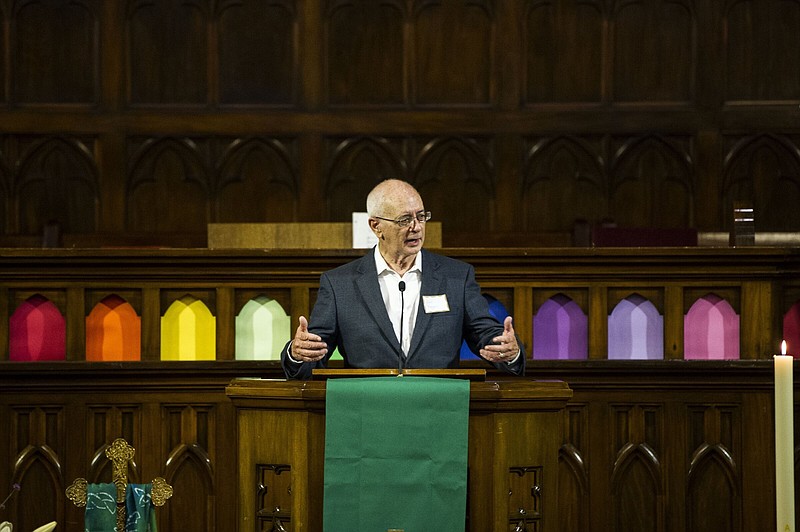 When the Rev. Kurt Boggan died this month, it left a void at two downtown Little Rock churches with distinctive missions.

Canvas Community Church, which welcomes, feeds and sometimes shelters homeless people, seeks to serve those on the margins of society.

Since July 2020, Boggan had overseen both houses of worship -- Quapaw Quarter on Sunday mornings; Canvas Community on Sunday nights.

"He just was a wonderful leader and a compassionate man," said another team member, Bobbi Pitts.

His life was consistent with the sign on the church's altar rail: "No Hate. Love All," members said.

"I so appreciated the fact that he loved and accepted everybody and he preached justice and love and acceptance," a member, Julie Atkins, said during a time of remembrance at Quapaw Quarter on Sunday.

Others recalled how proud he had been of his daughters, Emily Wineland, a political consultant in Little Rock and Ashley Boggan of Madison, N.J., who serves as general secretary of The United Methodist Church's General Commission on Archives and History.

They also emphasized the deep love he displayed for the Rev. Rebecca Walker Boggan, his wife of 43 years.

Paul Atkins, Julie Atkins' husband and Canvas Community's associate pastor, said Boggan was "kind of a big deal in our state Methodist church" after decades of successful leadership, yet he had welcomed the opportunity to help two tiny congregations grow.

Boggan was willing to "get out of his comfort zone as an executive-type pastor and come share his wisdom and expertise with us and get to know us," Atkins said. "We were blessed and honored to have him journey with us."

Bishop Gary Mueller of the church's Arkansas Conference, portrayed Boggan as fully committed to the gospel.

"He was an outstanding pastor, creative in reaching new people for Christ and growing churches and deeply committed to those living on the edges -- all the while making it about the mission and not himself," Mueller said.

Although his bachelor's degree from the University of Arkansas at Little Rock was in psychology, he knew early on that he wanted to go into the ministry.

Licensed as a pastor in 1976, he headed to Dallas to attend seminary at Southern Methodist University's Perkins School of Theology, where he earned a master of theology and, a few years later, a doctor of ministry.

Commissioned in 1978, he was ordained in 1983. After serving congregations in Holly Spring, Magnolia and Mt. Ida, he became pastor at Highland Valley United Methodist Church in west Little Rock, a position he held from 1988 to 2007.

During that time, average Sunday attendance rose from 264 to 461, according to statistics provided by the denomination's Arkansas Conference.

Kurt and Rebecca Boggan, a United Methodist deacon, were longtime partners in ministry. For most of his tenure at Highland Valley, a fast-growing congregation on Chenal Parkway, she served alongside him as minister of music, utilizing the graduate degrees in sacred music and voice that she'd earned at Southern Methodist University.

More recently, when he was senior pastor at First United Methodist Church in Bentonville, she was minister of discipleship.

That assignment followed his time as district superintendent in Jonesboro, where he oversaw churches and pastors across northeastern Arkansas and a stint as director of the Center for Clergy and Laity Excellence in Leadership.

After their arrival in Bentonville in 2014, the Boggans worked hard to grow the church.

"Most of the new families that would join the congregation were in their 30s with young kids. He and Mom knew that if you built up good children's programming that families would stick around," Ashley Boggan said.

Instead of children being on the periphery, they were center stage.

On the first Sunday of every month, "children would design and lead the worship services," she said.

The Boggans believed "if you give kids a voice and you empower them, people stick around," she added.

Attendance, Boggan said, more than doubled under her parents' leadership.

Their time in Bentonville ended after Rebecca Boggan began suffering from cerebral amyloid angiopathy, an incurable disease which robbed her of her ability to speak, sing and function independently.

"We got the diagnosis in April of 2020 after her second bleed. Dad officially retired ... [and] they moved down to Little Rock," Ashley Boggan said.

In central Arkansas, the Boggans were close to their eldest daughter, but Kurt Boggan missed ministry; his retirement lasted a matter of months.

"We really encouraged him to have a hobby, to do something besides just be a caretaker. I promised to take care of Mom a couple of days a week to help out so that he could do that," Emily Wineland said.

"Instead of going up to the lake or going fishing or hunting, he kept working. This was his passion. This was his life's call and he wanted nothing more than to continue to serve, [to] serve in places where he knew that he could be impactful," she said.

"Even if he wasn't working in a full-time big church like he had his whole career, someplace where he could make a difference and love those who needed to be loved. Quapaw Quarter and Canvas Community really filled a place in his life," she said.

Over the past two years, "he was not only giving his all to Mom but [was] able to give and feel like he was still part of something with everyone else," she said.

Due to covid-19, Boggan's opportunities for in-person ministry were limited at first.

Most of the congregation at Quapaw Quarter were introduced to him on Facebook, and, initially, there was a little uneasiness with the preacher from Wal-Mart country.

Boggan looked like "a formal suit and tie kind of person" and people wondered if he'd fit in at a quirky and progressive congregation, Pitts noted.

But his attire didn't end up being a barrier, she said.

"He just embraced us and we embraced him," she said.

By the time he arrived at Quapaw Quarter, the congregation was dwindling and thinking about moving somewhere smaller; With average attendance dropping below 50, it had even placed the building on the market.

Boggan, who had left a church with average weekly attendance of more than 500 people, told parishioners he'd do all he could to help revive his new church at its current location if they were committed to making it happen, but that they'd need to dismiss the Realtors.

"He said from the beginning, 'I know how to grow a church. I can grow a church here ... [but] I cannot grow a church that has a For Sale sign in front of it,'" recalled Anne Holcomb, the church's administrator.

Boggan didn't abandon his suits entirely, but he modified his wardrobe on special occasions.

On Palm Sunday, like others in the congregation, he wore a Hawaiian-style shirt to church. And on Pentecost Sunday, he wore a red shirt, a color that symbolizes the Holy Spirit fire that fell from heaven.

More importantly, he made newcomers feel truly welcome and gave Quapaw Quarter members confidence that they'd be able to turn things around.

At Canvas Community Church, Boggan encouraged people to focus on ministry and relationships with the homeless, rather than trying to target multiple demographics, Paul Atkins said.

After moving to Little Rock, Rebecca Boggan's condition continued to deteriorate. Eventually, hospice services were needed, although her husband remained her primary caretaker.

"Do this," Jesus declares, "and you will live."

The next week, Boggan came down with a virus that left him exhausted and severely weakened, family members said. His temperature spiked and he felt miserable, but he hid the news from his daughters until the worst appeared to be behind him, church and family members said.

Ashley Boggan was in England, walking in the footsteps of the founder of Methodism, John Wesley, and Charles Wesley, his hymn-writing brother.

Wineland had taken her family on a brief trip to Disney World.

He told congregants he didn't want his daughters to know he was sick, worrying they would rush back to Arkansas.

Members of the church's worship team last spoke with Boggan on July 19; he told them he'd be out for one more week and lined up a substitute to preach July 24.

That same day, a hospice worker checked his blood oxygen level and was alarmed that the number was so low.

"They advised him to go to the hospital and he said, 'I'm not leaving Rebecca,'" Wineland was later told.

That evening, Bobbi Pitts took her pastor a chicken salad dinner, set it by his doorway and spoke with him briefly.

"He said that his temperature was down and he thought he was on the mend," she said.

The next morning, he was found dead. Initially, people assumed the cause was covid. It was later determined to be a heart attack, Ashley Boggan said.

"The last thing he did was tuck my mom into bed and tell her he loved her," she said.

Heath Williams, a United Methodist minister who grew up at Highland Valley, said his former pastor will be missed.

Boggan performed the wedding for Heath and his wife, Jeanne Williams, and was supportive of the two ordained elders as they pursued their vocations.

"He loved leading people to Christ and helping them learn about God," Williams recalled. "He's ministered to people all over this state and leaves behind a huge legacy of people that called him pastor and called him friend and colleague." 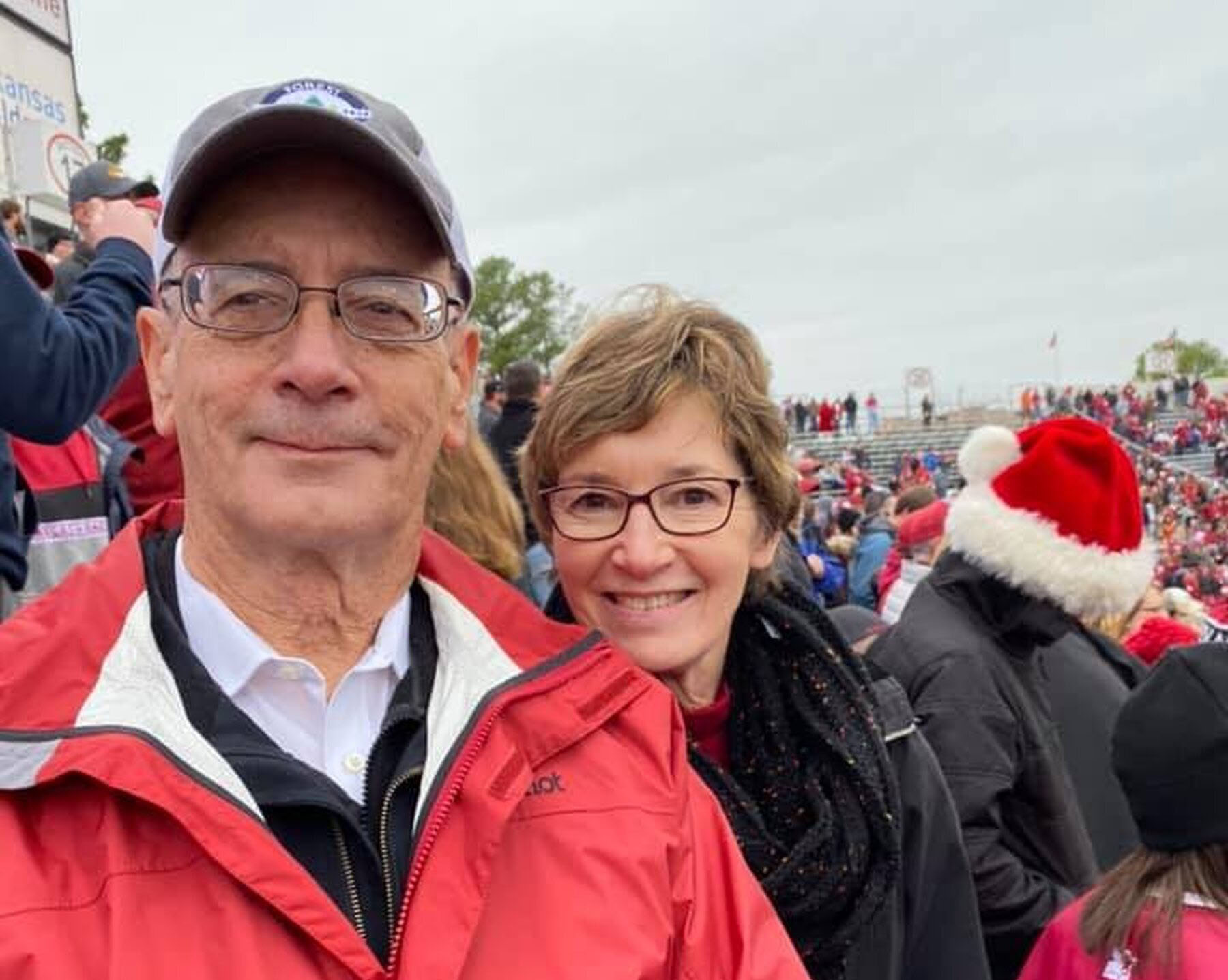 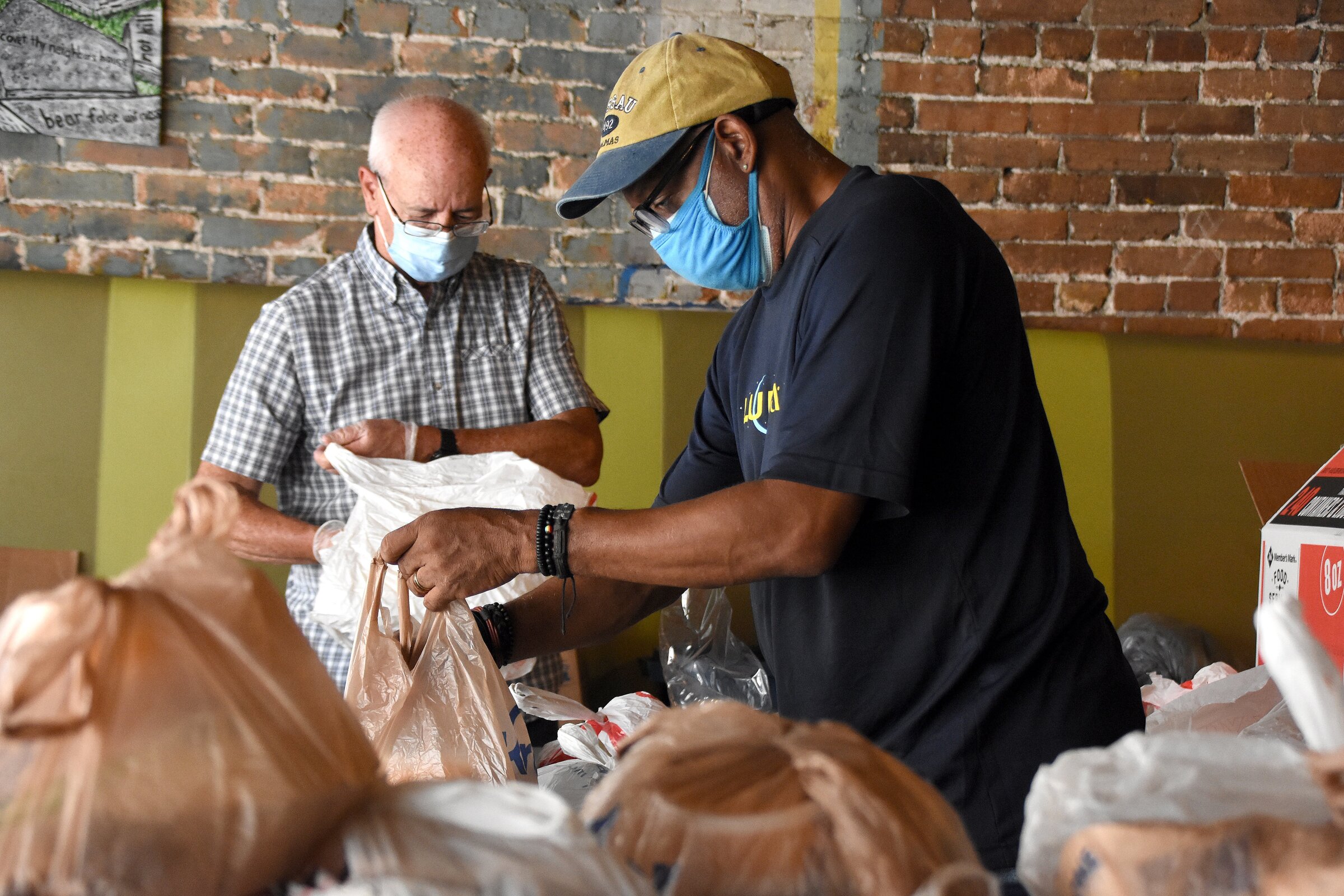 Pastor Kurt Boggan (left) and Julius Scott bag meals on Aug. 18 while getting ready for the 10th anniversary of Canvas Community Church’s Dinner and a Movie. The program provides a free meal and entertainment each Wednesday to members of the homeless community. (Arkansas Democrat-Gazette/Staci R. Vandagriff)