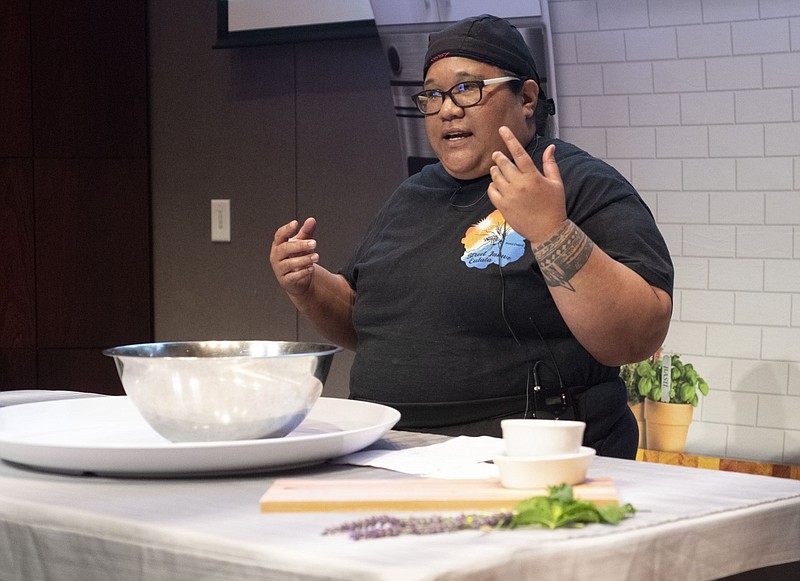 Chef Judy Tatios leads a demonstration on making coleslaw at the University of Arkansas, Fayetteville in this June 17, 2021 file photo. Tatios, who specializes in Marshallese cuisine, was addressing school superintendents and heads of child nutrition at an event hosted by the Northwest Arkansas Council. (NWA Democrat-Gazette/J.T. Wampler)

Reaping all the benefits of Northwest Arkansas' diverse population requires newcomers to reach out for the community to welcome them in, said speakers on a panel Friday organized by the Northwest Arkansas Council.

For instance, people think the Arkansas Association of Asian Businesses is for Asians operating businesses in Arkansas, said group founder and President Yang Luo-Branch. The group is open to anyone in Arkansas doing business or wanting to do business in Asia, she said Friday. Similarly, Marshallese-American chef Judy Tatios wants to introduce people to Marshallese culture using food as a gateway, not just cater to the region's Marshallese community, she said.

"Engagement starts from us," said Luo-Branch, an immigrant from China.

Luo-Branch, Tatios and Francisco Herrero, president of the bilingual Banco Si banking institution, discussed the council's recently released report on diversity in a panel discussion Friday, offered by the Onward Ozarks speaking series. They were joined by series host Randy Wilburn and Margo Lemaster, executive director of pro-diversity group EngageNWA. The council is a nonprofit group of regional business and community leaders.

The council released its diversity report Wednesday. Benton and Washington counties' population was 95.4% white in 1990, the study shows. That proportion fell to 70.9% by last year and will be 67.9% by 2026 while the overall population growth rate will remain high, the study says.

The proportion of racial and ethnic minorities in the region could be understated, Lemaster said during the panel discussion.

"The census has stated nationally that there are undercounts," Lemaster said of the 2020 U.S. census. The census is among the sources used by the council's study.

The federal Census Bureau did announce earlier this year there were statistically significant undercounts of Black, Hispanic and Native American populations. Northwest Arkansas residents can safely assume those undercounts affected estimates of Northwest Arkansas minorities, Lemaster said Friday. Marshallese in particular have been an undercounted group in previous census-takings, she said.

"Language is one barrier but not the only one" for Hispanics in obtaining financial services, he said.

"If you come here from another country, you have no history in the U.S. that translates to a credit history," Herrero said. Credit histories are the foundation of getting almost any kind of finance, he said.

Banco Si will not only provide basic banking services but will offer help in creating and building a credit history, he said.

Despite attempts at embracing diversity, Northwest Arkansas isn't perfect. For example, one of the barriers Tatios faces in sharing Marshallese culture through food is obtaining the staples of Marshallese cuisine, she said. Many Marshallese dishes include coconut crab -- a land-dwelling crab that can grow "as big as a garbage can," she said. These crabs can weigh as much as nine pounds, according to the National Marine Sanctuary Foundation.

"Marshallese don't use spices," Tatios said. So authentic ingredients are vital to getting the blend of flavors right. Obtaining those native ingredients is a challenge here, she said.

As welcoming as Northwest Arkansas is, "it is very tough being Marshallese in the U.S.," Tatios said. "Our cultures are very different." Marshallese are much more "laid back" than others, she said.

All panelists described Northwest Arkansas as a welcoming community with plenty of opportunity.

"I was born in California," Tatios said. Northwest Arkansas reminds her of what California was like as it was booming.

"This really is the land of opportunity," she said, echoing one of the state's nicknames.