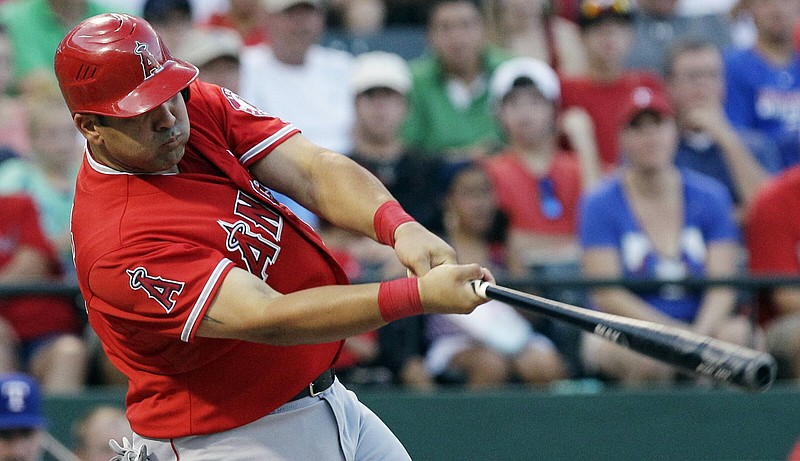 Designated hitter Kendrys Morales, who played in the minor leagues for the Arkansas Travelers, hit home runs from both sides of the plate during a nine-run sixth inning on this date in 2012. Morales capped the inning with a grand slam as the Los Angeles Angels beat the Texas Rangers 15-8. (AP file photo)

1959 Willie McCovey had four hits in four at-bats in his major league debut with the San Francisco Giants. His hits included two triples in a 7-2 win over the Philadelphia Phillies.

1962 The American League, led by home runs from Leon Wagner, Pete Runnels and Rocky Colavito, powered past the National League 9-4, in the second All-Star Game of the year. Wagner of the Angels was named MVP.

1969 Houston, behind grand slams by Denis Menke and Jim Wynn, scored 11 runs in the ninth inning to pound the New York Mets 16-3 in a doubleheader opener at Shea Stadium. Mets pitchers Cal Koonce and Ron Taylor gave up the slams, marking the first time this century that two grand slams were hit in the same inning of a National League game.

1973 Jim Bibby of the Texas Rangers pitched a 6-0 no-hitter against the Oakland A's.

1980 Houston Astros pitcher J.R. Richard had a stroke during a workout at the Astrodome and underwent surgery to remove a blood clot behind his right collarbone.

1982 The Atlanta Braves returned Chief Noc-A-Homa and his teepee to left field after losing 19 of 21 games and blowing a 10½-game lead. The teepee was removed for more seats. The team recovered to regain first place.

1988 John Franco of the Cincinnati Reds set a major league record with 13 saves in one month. Franco was tied with Sparky Lyle, Bruce Sutter and Bob Stanley.

1990 George Steinbrenner was forced to resign as general partner of the New York Yankees by Commissioner Fay Vincent.

2008 Kelly Shoppach of Cleveland tied a major league record with five extra-base hits, including a game-tying home run in the ninth, but Detroit beat the Indians 14-12 in 13 innings. Shoppach had two home runs and three doubles.

2011 The New York Yankees broke loose for 12 runs in the first inning of the nightcap of a day-night doubleheader, setting a franchise record en route to a 17-3 rout of Baltimore.

2012 Kendrys Morales, who played in the minor leagues for the Arkansas Travelers, homered from both sides of the plate during a nine-run sixth inning, capping the burst with a grand slam that sent the Los Angeles Angels romping past the Texas Rangers 15-8. Morales became the third switch-hitter in major league history to hit home runs as a lefty and righty in the same inning. Carlos Baerga did it for Cleveland in 1993 and Mark Bellhorn of the Chicago Cubs duplicated the feat in 2002.

2017 Jeff Bagwell, Tim Raines and Ivan Rodriguez are inducted into the Baseball Hall of Fame.

Print Headline: This date in baseball