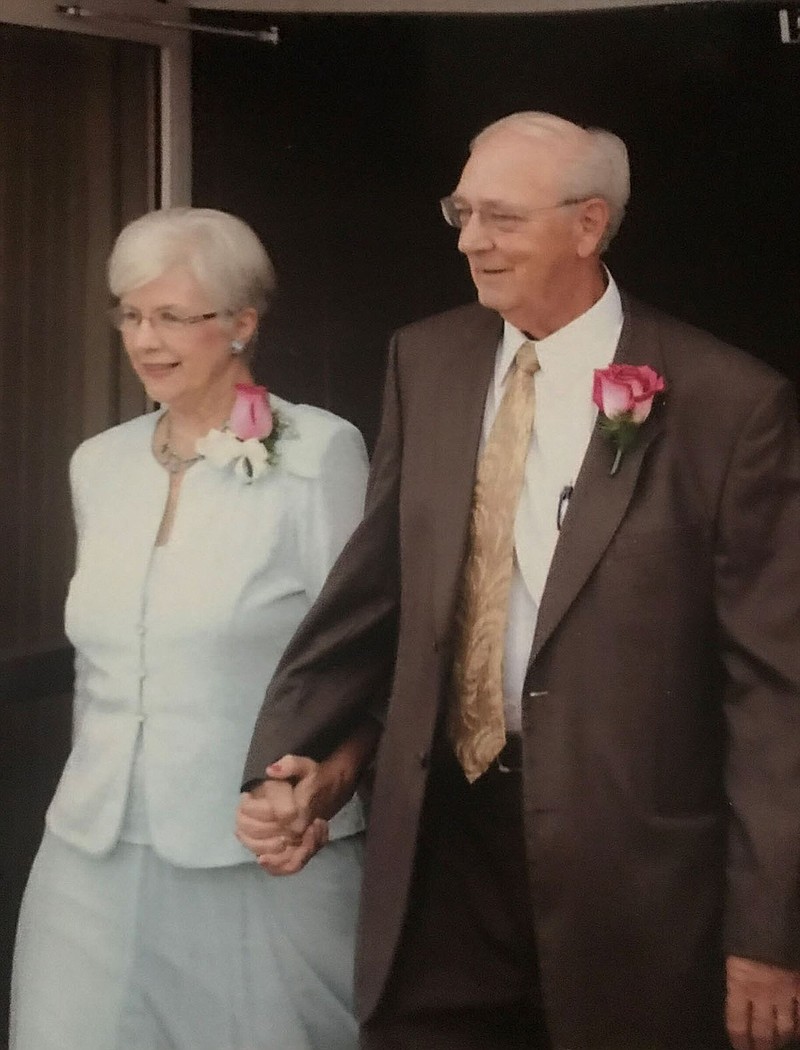 Martha Miller sometimes saw Lawrence Burns at the community center in Cabot, and she would say hello in passing.

She recognized him from the First Baptist Church in Cabot, where they had both gone for years.

"He was very much into exercising and I was impressed because most of the people up there were much younger," Martha says. "I would speak to him, just say hi, and go back to my walking."

As time went by, Martha's husband became ill and he eventually moved into a long-term care facility. Martha moved to Sherwood to be near her daughter and grandchildren. Her husband died in 2012.

"I decided to come back to Cabot and go to the First Baptist Church one day. I like the church here," she says.

It was on that visit, in 2013, that she happened to bump into Lawrence in the church's hallway.

They recognized one another on sight, though neither knew an associated name. In the few moments they talked they learned that each had suffered the grief of losing a spouse. Lawrence was widowed in 2011.

"I found out her name later by looking in the church directory," Lawrence says.

Lawrence called Martha a month or so after that, after much consideration, and explained who he was and how she might know him.

"He said, 'Do you remember me?'" says Martha, who had seen -- but had not recognized -- his name come up on her phone when he called. "He started explaining to me how we knew each other and then he asked me if he could come visit me sometime and I finally said yes."

She was hesitant, she admits.

"I was just nervous about all of it. I just wasn't sure. But I knew he was a good guy. I could just tell. I knew I could trust him."

Lawrence visited Martha at her apartment in Sherwood, and he told her he just wanted to get to know her.

"We would just talk and talk," Martha says. "We just talked, each one of us, about our lives and then he would take me out to McDonald's for coffee and baked apple pie. He would always say, 'I think I'm getting to know you but I want to get to know you better.'"

They had dated for about a year when he proposed marriage.

Lawrence wasn't nervous about the prospect of marriage, but Martha admits she was a tad anxious.

"I had decided once my husband had died that I didn't think I would ever get married again, so it made me a little bit nervous to think about it," she says. "But then I decided that yeah, I would. I knew he was a good guy, a nice guy, and it's true -- that's what he is."

He wore a suit for the occasion, and she had on a light aqua and white dress.

"I think there were more people from his side there than from my side when we got married," Martha says. "My daughter and my grand kids came and all of his kids came."

"We had quite a few friends there, too," Lawrence says.

They honeymooned in Branson.

"We saw 'Jonah and the Whale' at the Sight and Sound Theater," Lawrence says.

Following their trip, they stayed in Martha's apartment in Sherwood for a while so she could continue helping to care for her grandchildren. Then later she and Lawrence moved into his home in Cabot.

"We haven't been anywhere since covid has been going on but we used to go on several trips with other people our ages. We went to New York and we went to Times Square and out to see the Statue of Liberty and to all those famous places in New York," Martha says. "It was pretty exciting."

Lawrence has four children: Sheila Barnett of Cabot and Laura Baker of Branson, both of whom are teachers, and Dr. Larry Burns of Lexington, Ky., and Dr. Jerry Burns of Searcy, both medical doctors. He has eight grandchildren and five great-grandchildren.

Lawrence had been lonely after his wife died, and his daughter Sheila says their family was glad he found a companion. Family is important to both Lawrence and Martha, and they in turn were happy to have the support of their children.

"I've been well-blessed in my life," Lawrence says. "God has blessed me for a lot of years, with a marriage before for over 56 years; I lost her, but we have all of our kids and grand kids and great-grand kids."

He and Martha feel fortunate to have found love again.

"We've had all of our trips and Martha and I have our time together," he says. "I am blessed."

She says: “I thought he was the tallest thing I’d ever seen.”

He says: “I had no idea she would be my future spouse.”

She says: “I was a little nervous.”

She says: “Try to get along and respect each other’s views on things.”