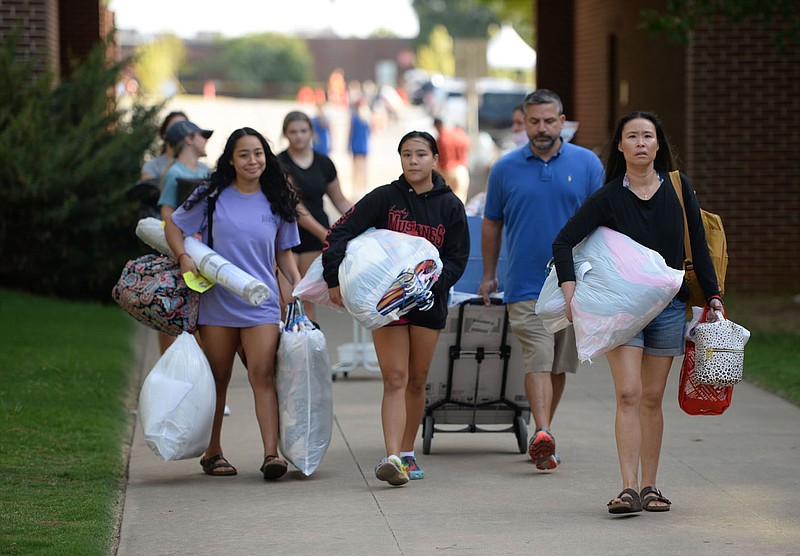 Volunteers help first-year University of Arkansas students and their families on Aug. 12, 2021, to move into dormitory rooms at the Northwest Quad complex on the university campus in Fayetteville. University administrators anticipate all 6,500 beds available to freshmen will be full this fall, with an additional 900 or so beds needed at off-campus student complexes that will be considered university housing. (File photo/NWA Democrat-Gazette/Andy Shupe)

FAYETTEVILLE -- The freshmen are coming.

So many, in fact, that on-campus beds at the University of Arkansas are full and about 900 college students will have to sleep off-campus at nearby complexes this fall semester.

Move-in day for students is Aug. 13. Enrollment is expected to top 30,000 students, said Laura Jacobs, chief of staff at the chancellor's office. The increase in enrollment is driven largely by an influx of first-time students, she said. Jacobs spoke Monday to the city's Town and Gown Committee, an advisory panel of city and university staff, students and residents.

The university will release official enrollment numbers after classes start.

The university expects about 7,000 freshmen this fall, Jacobs said. Freshman enrollment in fall 2021 was 6,064.

Total enrollment in fall 2021 was 29,068. The university's enrollment is growing, bucking the trend nationally, Jacobs said.

"This is certainly an anomaly right now in higher education. A lot of our peers in the state and across the country are declining in enrollment or staying flat. Flat is the new growth," Jacobs said. "We feel very fortunate to be in this kind of position where we're growing."

The university waived its requirement for freshmen to live on campus, as it has done since 2020 at the onset of the pandemic, and partnered with off-campus student complexes to find everyone a place to live, she said.

Jacobs mentioned partnering with student-centric complexes near campus such as The Vue on Stadium Drive, Ozark Villas on Beechwood Avenue, The Marshall on Razorback Road and The Locale on Haven Drive behind Harps on Garland Avenue.

There are about 6,200 beds available on campus, said John Thomas with university relations. A mix of classes will live at the off-campus complexes, he said.

The apartments, all of which are near campus and on Razorback Transit bus routes, will come fully furnished with appliances and utilities included, Thomas said. The 900 or so students living at the off-campus complexes will do so under a university housing contract, so they will still engage with the university as though they live on campus, he said.

"We're expecting potentially the largest freshman class in the university's history and almost all of them will be living on-campus or in one of these complexes," Thomas said.

This year's freshman class will include more Arkansas students than ever before, Thomas said. He said he suspected many students deferred enrollment because of the pandemic and were willing to wait for a more traditional college experience.

The university has contracted with off-campus complexes before, as recently as last year, for some upper-level students, Thomas said. There are also about 150 overflow beds available at dorms if needed, he said.

Mike Wiederkehr, City Council member for Ward 2 covering much of the University of Arkansas campus and downtown, said after the meeting the university needs to find a way to build more dorms.

Student population growth has far exceeded the pace at which the university has been able to put beds on campus for the past several years, he said.

Wiederkehr recognized the university's importance to the city as its largest economic driver. But with the city experiencing a housing crunch and a surging population, city and university officials will have to continue finding solutions that benefit both the town and gown sides of the city, he said.

"The demand for off-campus student housing is so great that it impacts our ability to attract housing for traditional family housing," Wiederkehr said. "There's a guaranteed market."

Northwest Arkansas's rental housing was already facing high demand and these new students will increase that pressure, said Duke McLarty, executive director of the workforce housing center for the Northwest Arkansas Council. The council is a nonprofit group of business and community leaders. The workforce housing center was created last year to address the shortage of housing for working class families, a growing challenge to the region's continued growth.

"Every increase in interest rates pushes more people out of the home-buying market and into the rental market," McLarty said. The Federal Reserve increased its interest rate by 0.75% Wednesday. This was the second increase in two months in an effort to fight inflation.

"The rental market is going to be tight when the students come back," McLarty said, referring to both freshmen and other fall semester students living off campus. Rents are bound to go up also, he said. "It's supply and demand."

Sterling Hamilton, real estate broker with Cushman & Wakefield/Sage Partners, said the university won't have 7,000 new freshmen every year forever. The national economic recession of 2007-09 likely will result in a generational decline in a few years, he said.

But even if student housing is overbuilt in the city, the market will find a way to adjust, Hamilton said. Those complexes with four bedrooms and a shared living space will have people living in them, whether they're students or someone else. Units could be remodeled to be more appropriate for families or nonstudents, he said.

Hamilton compared the complexes to the older, former student boarding homes that many people who live downtown today call home.

"A lot of times institutional people only see institutional measures," he said. "They don't see what could happen through creativity in the market, or how robust the market is in general."

To see the University of Arkansas, Fayetteville move-in timeline for students, go to: