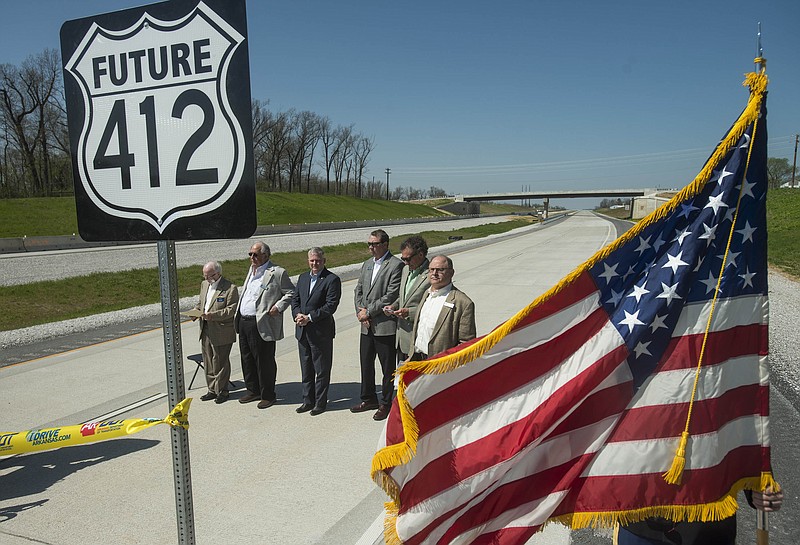 NWA Democrat-Gazette/BEN GOFF @NWABENGOFF Guests gather Wednesday, April 18, 2018, during a ribbon cutting for the first section of the future U.S. Highway 412 Springdale Northern Bypass. The 4.5 mile section of four-lane divided highway through Benton County connects Interstate 49 on the East to Arkansas Highway 112 on the West.

Regional planners got an early look last week at the proposed highway projects the Arkansas Department of Transportation plans to work on in Benton and Washington counties over the next four years.

The state's 2023-2026 transportation improvement program is still in draft form, but it gives a good idea of what projects are considered priorities in the region.

"This is the first time this has been shared with everybody here in Northwest Arkansas," Tim Conklin, assistant director at the Northwest Arkansas Planning Commission, told members of the Policy Committee on Wednesday.

Projects include work on unfinished parts of the U.S. 412 Springdale Northern Bypass, a series of improvement projects along Arkansas 112 between Fayetteville and Bentonville and more improvements to Interstate 49 interchanges in Fayetteville and Bentonville. There are partnership projects with several cities and the new access road to Northwest Arkansas National Airport appears for the first time.

"We have talked about some of these projects for many, many years. To get to the point where we're discussing construction, that's great for Northwest Arkansas," Conklin said. "Major corridor projects take 10 to 20 years to complete so we're seeing projects that were started 20 years ago moving toward completion, just like we saw I-49 from the early '90s completed just last year."

"The Northwest Arkansas National Airport, to our knowledge, is the only major commercial service airport in the country with only two-lane access," Burkes said. "While receiving the long-awaited environmental approval on the XNA connector highway earlier this year was a huge step, funding is always the ultimate obstacle for a major project like this, so we are thrilled to know that funding for this highway is now a certainty."

In addition to road construction projects, the plans call for substantial pavement and bridge preservation projects, replacing several bridges and safety projects, like cable median barrier improvements on 25 miles of I-49 in Washington and Crawford counties.

Noise barrier walls are planned at some locations on I-49 in Washington and Benton counties, and passing lanes are expected to be added on parts of Arkansas 59 in west Benton County.

Various trails projects are also in the draft plan. There should also be some money for transit, electric vehicle infrastructure and intelligent transportation systems, which use sensing, analysis, control and communications technologies to manage traffic congestion and control traffic flow.

The Transportation Department has not officially posted the list on its website, but it's expected to present the draft and set a public comment period sometime in the next few months.

Dave Parker, public information officer for the agency, said Friday details of the plan are expected to be discussed with the Arkansas Highway Commission at its September meeting, and the public comment period could begin by the end of September.

Regional Planning will have a comment period for the projects in Northwest Arkansas this fall. The plans will then need to be adopted by both Regional Planning and the Highway Commission. Hopefully the new plan will be finalized in November, Conklin said.

Arkansas Highway Commission member Philip Taldo, of Springdale, said he is pleased to see projects he has prioritized over his five years on the commission coming to fruition.

"It is gonna be good. I'm pretty proud of it, to be honest with you," Taldo said. "I've got three priorities, and they are the Springdale Northern Bypass, (Arkansas) 112 and the airport access road. That's all I've talked about for five and a half years."

Taldo said the passage of Issue 1 is making the projects possible.

Issue 1 is a sales tax for highway construction extended by voters in 2020. The measure indefinitely continues the half-cent sales and use tax dedicated to highways when the current statewide tax sunsets June 30, 2023. The tax raises about $290 million annually, according to Transportation Department officials. Of that, roughly $42 million goes to the counties and $42 million to cities, leaving about $206 million for the state.

"I tell people I spent the first five years groveling for money, and I'm spending the second five trying to hurry up and spend it. That's pretty much the truth," Taldo said.

Highway commissioners in Arkansas are appointed by the governor to 10-year terms.

Taldo said almost 20% of the state's population is in Northwest Arkansas, and the growth doesn't appear to be slowing.

He said having a dedicated revenue source means the state can take on more and bigger projects than were possible in the past. Construction of those big projects is also going faster than in the past because bigger contractors with more resources are coming in and doing them, he said.