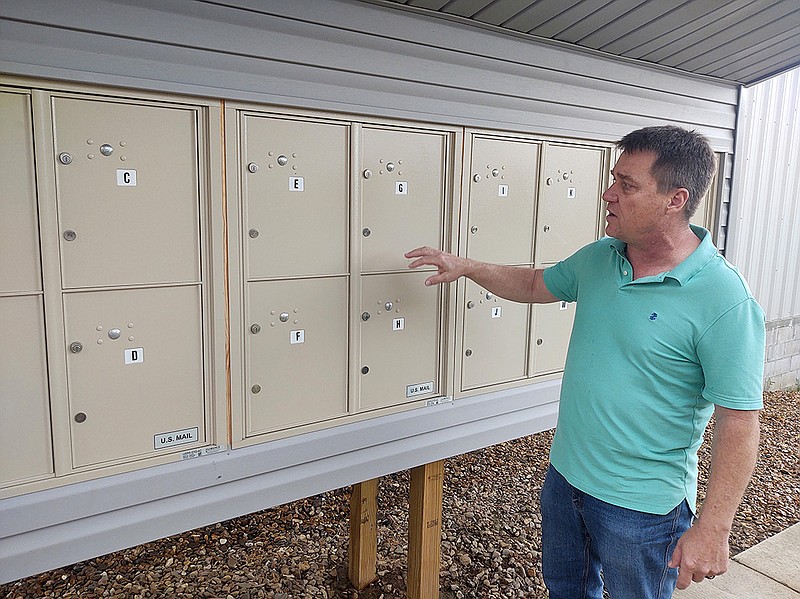 RUSSELLVILLE -- Fred Teague hopped out of an ATV and bounded down a path made of boards that wound deeper into the woods.

Unseen from any public roads in Russellville, but still squarely in the center of the River Valley city of over 29,000, is a small wooden building -- which Teague refers to as a "box" -- just wide enough to accommodate a single-size cot with about 2 inches left on each side. A propane space heater juts from the wall and a small shelf is overhead with a closet rod to hang clothes. There is a small square window along one side of the wall.

Teague picked up an errant piece of trash, then tugged on the door frame to find the source of a squeak. As he walked out of the homeless encampment, he waved to a man across the way at another small box.

As he drove out of the multiunit homeless encampment, he pointed to a portable toilet and a cooling station consisting of a white awning, tables and refrigerators packed with bottled water.

"This heat has me worried," he said, shaking his head in concern.

The day before, when temperatures climbed over 100 degrees, Teague navigated between local motels, securing rooms for homeless people and whole families who needed shelter from the scorching sun.

Teague pointed the ATV toward a large metal building -- 3,400 square feet in size -- with a sign that heralded the facility as "1 Roof."

Inside, Teague opened a door to a large common area with round tables and chairs, a coffee bar off to one side and a kitchen area bordering the back wall. A man in a stained shirt and worn boots sat at one table, sipping a beverage. He didn't look up or make eye contact.

"Everything is here that they need," Teague said. "It's all under one roof. They can go to the food pantry, get medical care, take a shower, get clothes or supplies. It's all here."

Access, Teague said, is a huge need of not just the homeless, but for the rest of the community as well. Low-income families can get help paying utility bills or rent, while foster parents are availed of a wide range of services from clothing to continuing education and peer support.

The 1 Roof organization began as a thought several years ago, but has grown even bigger than Teague dreamed.

In 2019, before the covid-19 pandemic hit, Journey Church, a nondenominational Christian church in Russellville, decided its mission of community outreach was outside the church doors -- not in pews inside a massive facility.

The church's mission, Teague said, is to become and produce doers of the word and not hearers only.

The church as a whole moved out of its facility and relocated its offices into a small metal building in the back. Sunday sermons were held in homes where small groups gathered instead of hundreds of parishioners at once.

"We wanted to uproot the traditional American church and go into people's homes," Teague said. "Instead of spending money on a building, we wanted that money to go into the community to meet our goals."

Journey Church Pastor Steve Pyle said he and Teague, who has been a part of Journey Church for several years, have shared a heart and a vision for what they feel like God wanted the church to do in the world.

"Often what the church has done is become known as a location or a building. We lost the actual movement of people to make a difference in the world," Pyle said. "We've just been moving in that direction for years and how we activate our people into being the church instead of going to church. We started asking how we could leverage the building to where it's not thought of as a church, but as a place where people can serve their community."

The church donated its nearly $3 million equity in the 8-acre site and buildings to the 1 Roof organization, which then paid the church only $600,000. The purchase price and renovation costs were raised by a combination of donations from local churches and private donors, grants and a financing note from Arvest Bank.

Pope County has long been in the spotlight over contention surrounding locating a casino there. The issue has pitted citizens and community leaders against each other.

Cherokee Nation Businesses, which currently holds the gaming license, has contributed millions of dollars to local nonprofits and other organizations. The Oklahoma-based casino operator even negotiated a $38.8 million Economic Development Agreement with County Judge Ben Cross that would benefit nonprofits and cities in the area.

When asked, Teague said that 1 Roof has not accepted any funds from any casino interest in the state.

When asked for the names of the organization's major donors, Teague said many are quietly giving and don't expect publicity.

The clinic moved its 15-year operation from Dardanelle to Russellville specifically to be a part of the 1 Roof mission, Becky Beavers, the clinic's director said.

In Dardanelle, the clinic's location underwent a change in ownership, raising its rent from $1 a year to several thousand. That was when Teague contacted Beavers.

"I will never forget it. I was in the kitchen cooking dinner," Beavers said. "I met with him in January of last year and we started the process of moving over here."

In Dardanelle, Beavers said, many people didn't know the clinic existed. There was little public exposure. But before the clinic even opened in Russellville, community leaders and future patients were knocking on its doors.

The clinic spent about $180,000 to build out the interior of the 8,000-square-foot Russellville facility and turn it into a multiservice clinic.

On a recent Wednesday, the waiting room with brand new plastic chairs was full of patients, many filling out paperwork attached to a clipboard. Some brought their whole family in for care.

A walk through the rooms behind the reception desk with Teague showed technicians in a lab running samples through shiny equipment, a nurse practitioner knocking on one patient room after the next and clinicians shepherding the patients to a pharmacy stocked with medications.

Teague flipped the lights on to illuminate two rooms with optical equipment. Other rooms were filled with rows of dental chairs and equipment.

His eyes widened and his mouth gaped open. He waved an arm to take in the whole clinic.

"Can you believe this?" he said. "It's incredible. From a thought to this."

"We serve under-insured and uninsured people from anywhere in our state," Beavers said, adding that the patients must be 300% below the poverty line.

All services are free, including the medication.

The word is out, Beavers said, and, already, after opening in June, expansion is necessary.

"We stay busy. There are a lot more patients now," she said.

The clinic is open from 9 a.m to 3 p.m. Monday through Thursday. An additional nurse practitioner was added to meet the patient load.

Doctors, dentists and eye doctors, as well as other medical professionals, volunteer their time to staff night clinics beginning at 6 p.m. on the first and third Thursday of each month. Optical and dental clinics are also held each month.

"It's a leap of faith," Beavers said. "Unlike regular providers who make more money the more patients they serve; the more patients we have, the less money we have. We're taking it one month at a time. We get donations from churches, private donors and grants. Our budget has increased significantly."

Having the clinic under the same roof as the other nonprofits reduces the stress on clients, especially considering the higher gas prices, Beavers said.

"When a patient has to choose between gas and insulin, they're going to choose gas," she said. "This is the ideal situation. We even collaborate with other organizations in Russellville and Pope County that aren't in the building."

Russellville Mayor Richard Harris said in a recent interview that it has been exciting to watch the concept go from an initial conversation to reality.

"While we have many worthy nonprofit agencies in Russellville that work hard to meet the needs of the community, 1 Roof provides a single location for multiple services," Harris said. "This is important for those that have transportation issues or are just unaware of what services are available. I believe that this is a model that other communities could replicate to better serve their citizens."

Pyle said that he hopes other areas in the state and around the nation follow their lead, not just in terms of nonprofits, but also getting the church body out of buildings and into the communities.

"It has been incredible, Pyle said. "This is what we're supposed to be about. It's our hope that all of the local churches are able to serve their community through this one location."

Russellville resident Debbie Williams said she is overjoyed to see the 1 Roof vision come to fruition.

"Over the years I have volunteered or contributed to several of these organizations and have seen first hand the amazing work these nonprofits do to help individuals in our area," Williams said. "Having all of these nonprofits under one roof allows them to more effectively serve the River Valley community. It does your heart good to see so much care and compassion coming from under 1Roof."

Cross said the ability to coordinate and amass the resources into one location will not only eliminate the duplication of some services, but will also allow those in need to receive assistance in an all-inclusive setting.

"This will truly provide our citizens with a unique environment to meet the need where necessary," Cross said. "As the board president of ARVAC as well, I see the efforts and success stories of what these resources can do in the lives of people, which is why ARVAC has coupled their efforts into 1 Roof as well, providing pathways to eliminate hunger and poverty."

For Teague, the mission's future is endless. He sees a stronger community; a more healed community.

"The opposite of addiction is community," he said. "And that's what we've created here. It's just absolutely phenomenal."