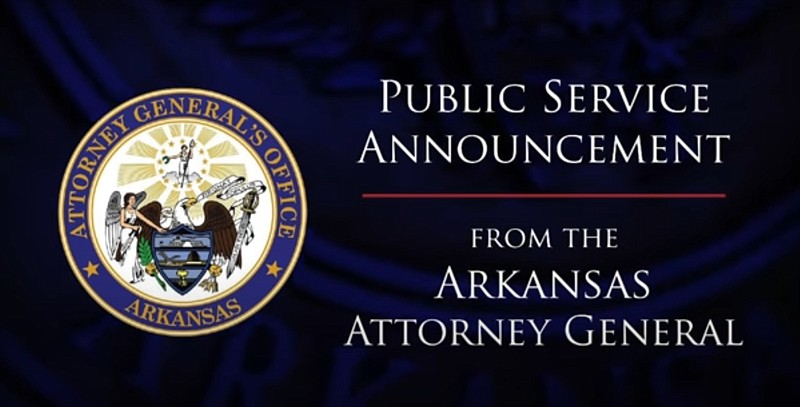 The logo for the public service announcements sponsored by the Arkansas attorney general's office's is shown in this undated screenshot. Arkansas Attorney General Leslie Rutledge spent $969,587 in state funds on television and radio ads in fiscal 2021 that ended June 30, 2021, and $2.26 million in fiscal 2020 that ended June 30, 2020, a year in which the ads were branded as the "Rutledge Report."

LITTLE ROCK -- Attorney General Leslie Rutledge spent $3.28 million in state funds on television and radio advertising in fiscal year 2022 that ended June 30 after spending nearly $1 million in the previous fiscal year, according to her office's records.

The attorney general office's spending on radio and television ads in fiscal 2022 is the largest expenditure on these ads in any fiscal year in the past 15 years based on the office's records. The office's ad spending is financed out of money from lawsuits won by the office.

The office's ads have covered topics such as Medicaid fraud, opioids, child abuse and price gouging.

Before fiscal 2020, the largest amount that the office spent on such ads since at least 2008 was $459,200 in fiscal 2014, when Democrat Dustin McDaniel was attorney general. That fiscal year started in July 2013; McDaniel withdrew from the 2014 governor's race in January 2013.

"Using lawsuit settlement funds designated for the education of Arkansans, the Attorney General will continue to air public service announcements through the remainder of her tenure because it remains her priority to assist hundreds of thousands of Arkansans in need," Priest said.

In the May 24 primary, Rutledge won the Republican nomination for lieutenant governor over five rivals -- most of whom criticized her over significantly boosting the attorney general office's spending on radio and television ads in the past few years and alleged that she was promoting herself at state expense. In May, her office reported it had spent $2.9 million on radio and TV ads at that point in fiscal 2022.

Before the GOP primary, Rutledge described the criticism from her Republican foes for lieutenant governor as "nothing more than silly political attacks." At that time, she said that she has spent the past 7½ years as attorney general trying to increase Arkansans' awareness of the office's services and that the office received 110,000 constituent phone calls in 2021.

In previous years, a band of Republican state senators had questioned her advertising spending.

State Rep. Mark Berry, R-Ozark, who is an ally of Rutledge, said Friday, "I never heard it brought up in any conversation with House members."

Rutledge announced her bid for governor July 1, 2020, at the start of fiscal 2021 and said at that time that her office's ad spending in fiscal 2020 was "absolutely not" aimed at promoting her for governor. She said the coronavirus pandemic led the office to increase its ad spending to bolster its outreach efforts.

Starting in July 2020, Rutledge changed her office's ads to remove her name, image and voice to ensure that "the unfounded concerns of her political opponents" wouldn't stop her from carrying out the office's duties, Priest said at that time. She had declined to specify to whom she was referring to as Rutledge's political opponents.

In mid-August 2021, Rutledge abandoned those changes by airing a commercial in which Rutledge and five of her staff members said they had been vaccinated against covid-19 and she urged people to get the facts about the vaccine. The commercial aired from Aug. 16-Oct. 23, according to the attorney general's office.

On Nov.9 almost midway through fiscal 2022 , she announced her departure from the governor's race to run for lieutenant governor.

In the 2021 regular session, the ad spending in Rutledge's office prompted discussions among state lawmakers that led to a bill, sponsored by Sen. Kim Hammer, R-Benton, and enacted as Act 1043, that requires certain disclosures on publicly funded ads using an image or a voice of an elected official. Rutledge has said her office worked with Hammer on the measure.

Under Act 1043, all articles, statements or communications using the image or voice of an elected official appearing in any radio, television or any other electronic medium for the publication of which a consideration is paid or to be paid by federal, state or county taxpayer funds shall clearly contain the words paid advertisement, paid ad, paid for by, sponsored for or furnished by, and the name of the state entity, county or constitutional office that paid for the ad.

Hammer said in a recent interview that he wants to review how the attorney general office's crafts lawsuit settlements and how much latitude is given with the spending of settlement dollars.

He said one potential option is for the Legislature to set a cap on the attorney general's advertising expenses and any spending above that level requires the review or approval of the Legislative Council. He said he wants to make sure such a provision would be constitutional.

The Republican attorney general nominee is Griffin, who departed from the governor's race in February of 2021. The Democratic nominee is attorney Jesse Gibson of Little Rock.