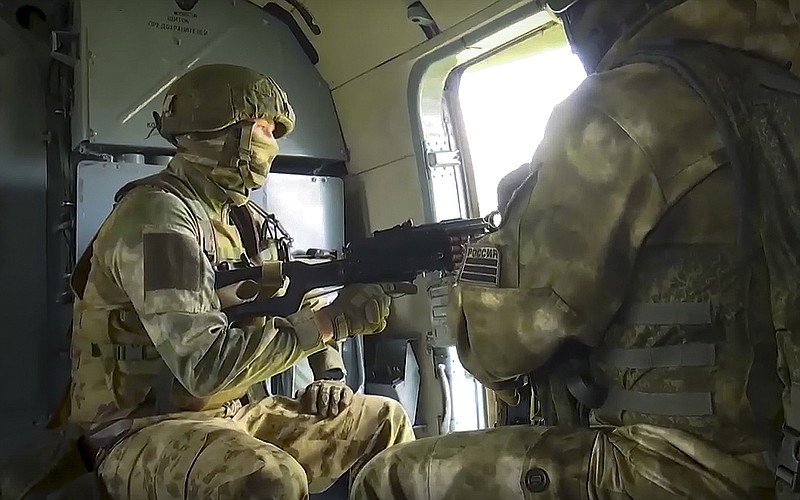 Ukraine made small but steady gains in the southern region of Kherson, a port city where thousands of Russian soldiers are now largely isolated after Ukrainian strikes on key supply routes.

A senior U.S. Defense Department official acknowledged those advances at a news briefing Friday and said there was growing evidence that steep Russian losses had left some units ill-prepared to fight.

The official described Russia's recent efforts as a failure on the battlefield and at home, where Moscow's rhetoric about its ambitions in Ukraine has grown more bombastic in recent days.

Senior Kremlin officials have talked of regime change in Kyiv, the capital Ukraine. Russian Prime Minister Dmitry Medvedev posted a map on his Telegram channel depicting a Ukraine swallowed up by Russia and its neighbors.

Although Russia's forces are trying to push deeper into the Donetsk region of eastern Ukraine, they have not been able to break through Ukrainian defenses, according to Ukrainian and Western officials.

"Throughout July, the occupiers have been trying to storm Donetsk region," Serhiy Haidai, head of the military administration in neighboring Luhansk province, said in a statement. But unlike with the Russians' push in the spring and early summer, when they could use their significant artillery advantage to flatten areas before advancing, Haidai said the Ukrainians' destruction of Russian ammunition depots had "made it much more difficult for them to replenish arms stocks and maneuver."

Still, he said, Russian forces continued "to destroy settlements, employing barrel and jet artillery." At least six civilians were killed and 15 others were injured by Russian shelling in the Donetsk region Friday, local Ukrainian officials said.

Deputy Prime Minister Iryna Vereshchuk warned Saturday that Ukrainian-controlled parts of Donetsk will face severe heating problems this winter because of the destruction of gas mains. She called for a mandatory evacuation of residents before the cold weather sets in.

Elsewhere in eastern Ukraine, Russian rockets hit a school in Kharkiv and a bus station in Sloviansk, among other strikes.

On the southern front, at least one civilian in the port city of Mykolaiv died when a Russian missile struck a high-rise building overnight, according to Vitaliy Kim, the local governor.

Residents of Nikopol -- a town just across the Dnieper River from Russian-controlled territory surrounding the Zaporizhzhia nuclear power plant -- weathered another night of heavy shelling. The attack hit more than a dozen residential homes and caused a widespread power failure, according to local officials.

The Ukrainians have accused the Russians of using the nuclear power plant as a military base, assuming that the Ukrainians will not fire on it given the risks involved. But Ukrainian officials said Saturday that their country's military had hit Russian positions in the town where the plant is located, Enerhodar.

"It was really hot in Enerhodar, literally," the town's exiled mayor, Dmytro Orlov, said in a statement. He said three units of Russian military equipment, parked at the entrance to a local hotel, had been destroyed.

While the Russians were working to repair a vital bridge over the Dnieper River farther south near the city of Kherson, the Ukrainians said it remained impassable and that Russian forces based on the western side of the river were largely isolated from resupply and support.

Ukrainian and Russian officials blamed each other Saturday for the deaths of dozens of Ukrainian prisoners of war in an attack on a prison in a separatist-controlled area. The International Red Cross asked to visit the prison to make sure the scores of wounded prisoners of war had proper treatment, but said its request had not been granted so far.

Ukrainian President Volodymyr Zelenskyy said the Red Cross and United Nations have a duty to react to the shelling of the prison complex in Ukraine's eastern Donetsk province, and he called again for Russia to be declared a terrorist state.

"Condemnation at the level of political rhetoric is not enough for this mass murder," he said.

Separatist authorities and Russian officials said the attack Friday killed 53 Ukrainian POWs and wounded another 75. Russia's Defense Ministry on Saturday issued a list naming 48 Ukrainian fighters, ages 20 to 62, who died in the attack. It was not clear if the ministry had revised its fatality count.

Ukraine and Russia alleged the attack on the prison was premeditated and intended to silence the Ukrainian prisoners and destroy evidence.

The International Red Cross, which has organized civilian evacuations and worked to monitor the treatment of POWs held by Russia and Ukraine, said it requested access to the prison "to determine the health and condition of all the people present on-site at the time of the attack."

"Our priority right now is making sure that the wounded receive lifesaving treatment and that the bodies of those who lost their lives are dealt with in a dignified manner," the Red Cross said.

But the organization said Saturday its request to access the prison had not been granted yet.

"Granting ICRC access to POWs is an obligation of parties to conflict under the Geneva Conventions," the International Red Cross wrote on Twitter.

The Ukrainian military accused the Russians of shelling the prison to cover up the alleged torture and execution of Ukrainians there.

The Institute for the Study of War, a think tank based in Washington, said the competing claims and limited information prevented assigning full responsibility for the attack but the "available visual evidence appears to support the Ukrainian claim more than the Russian."

Moscow has opened a probe into the attack and the U.N. said it also was prepared to send investigators. U.N. deputy spokesman Farhan Haq said "we stand ready to send a group of experts able to conduct an investigation, requiring the consent of the parties, and we fully support the initiatives" of the Red Cross.

The prison attack reportedly killed Ukrainian soldiers captured in May after the fall of Mariupol, a Black Sea port city where troops and the Azov Regiment of the national guard famously held out against a months-long Russian siege.

On Saturday, an association of Azov fighters' relatives dressed in black demonstrated outside Kyiv's St. Sophia Cathedral and called for Russia to be designated a terrorist state for violating the Geneva Convention's rules for the treatment of war prisoners.

Meanwhile, Amnesty International and the European Union have backed Kyiv in calling for an investigation into footage circulating online that appears to show pro-Russian forces castrating and executing a captive Ukrainian fighter.

Ukrainian officials pledged to identify the perpetrators after a series of gruesome videos recently surfaced on pro-Russian Telegram channels showing a group of men, one of them seen wearing pro-Russian symbols, castrating and executing a prisoner dressed in military fatigues with Ukrainian military insignia.

"This horrific assault is yet another apparent example of complete disregard for human life and dignity in Ukraine committed by Russian forces," Marie Struthers, Amnesty International's director for Eastern Europe and Central Asia, said Friday.

In a roughly 90-second-long video, a man dressed in military fatigues, wearing a "Z" patch and an orange-and-black ribbon associated with Russian forces, castrates the bound prisoner using a green utility knife.

A separate video shared on pro-Russian Telegram channels shows a single shot being fired into the prisoner's head.

The Washington Post was unable to confirm the date or location of where the videos were filmed.

"But the fog of war will not help to avoid punishment for the executioners," he tweeted. "We will identify and get to each of you."

The Post was unable to identify the captive in the footage.

The EU's top diplomat described the footage as an example of the "inhumane, barbaric acts" that amount to war crimes.

"Evidence in form of appalling video footage has been widely shared on pro-Kremlin social networks today, in which Russian soldiers commit a heinous atrocity against a Ukrainian prisoner of war," Josep Borrell said Friday. "The European Union condemns in the strongest possible terms the atrocities committed by the Russian armed forces and their proxies."

There has been no official comment from Moscow on the allegations.

Amnesty's statement said the London-based rights group has documented crimes under international law during Russia's war on Ukraine, including summary killings of captives of Russian-backed separatists and extrajudicial executions of Ukrainian civilians by Russian forces.

Information for this article was contributed by Marc Santora of The New York Times, by Susie Blann of The Associated Press and by Dalton Bennett and Ellen Francis of The Washington Post.