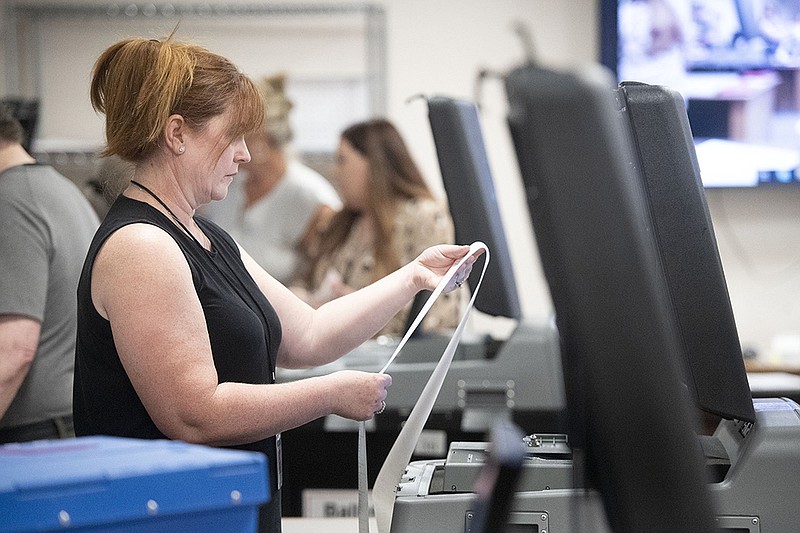 FAYETTEVILLE -- Washington County election officials spent 11 hours on Tuesday recounting votes cast in the race between Jody Harris and Chad Puryear for the Republican nomination for the state House seat for District 25.

At the end of the recount, the county's voting machines showed no discrepancies.

"Everything matched exactly as we had it on election day," Jennifer Price, executive director of the Washington County Election Commission, said at the end of the recount.

Price said election officials reviewed one provisional ballot with a vote cast in the District 25 race and found that it will count. The voter had failed to provide an acceptable identification when voting on election day but later brought proof of their identity to the Washington County Clerk's office. The additional ballot, with a vote for Puryear, will be added to the final totals when the election is certified.

With election day results showing a difference of just six votes, Harris asked for a recount in the three counties -- Washington, Crawford and Franklin -- that make up the district.

District-wide, Puryear had 2,209 votes in the final, but unofficial, results released on election day, and Harris had 2,203.

Franklin County election officials began their recount at 9 a.m. Tuesday and finished around 12:30 p.m., according to information from the Franklin County Clerk's Office.

The results were slightly different from the election day tally, with Harris receiving 131 votes and Puryear receiving 139 votes after an absentee ballot was added to the count, Harris said Tuesday afternoon. Franklin County had to recount a total of 3,507 votes.

In Washington County, election officials had to recount all 29,571 votes cast in the county to see if there were any changes from the election day results. In that count, Harris had 1,360 votes, and Puryear had 1,331.

Crawford County officials started their recount Saturday but halted the process after Harris raised questions about absentee ballots cast in the county.

Harris said she was told the original absentee ballots were at the home of Election Commission Chairman Bill Coleman.

"That breaks the chain of custody of the ballots," Harris said.

The Crawford County recount was set to resume today with state election officials present to observe.

Chris Madison, legal counsel for the state Board of Election Commissioners, said the need to "remake" ballots is not uncommon. He said the vote-counting machines sometimes will not read ballots that have been folded or wrinkled.

"People get in a tizzy about remade ballots," Madison said Tuesday. "It's usually absentee ballots that get mailed in and get a crinkle in them. The election officials have to remake the ballots so they can be counted."

Harris said she will be present when Crawford County officials resume their count this Wednesday morning. She said her campaign will reassess the situation when the recounts are completed and decide if there is any further action that might be taken.

Nate Bell, representing Puryear's campaign at the Washington County recount, said the campaign "trusts in the process and doesn't have any additional comments."

The district runs from the Washington County line in the north all the way through Crawford County on the south and includes parts of western Franklin County. The primary winner will face the Democratic nominee, Caitlin Oxford of Fayetteville, in the Nov. 8 general election.

The state has 100 House districts. State representatives serve two-year terms and receive a base salary of $44,357. They also receive per diem and reimbursement for expenses.