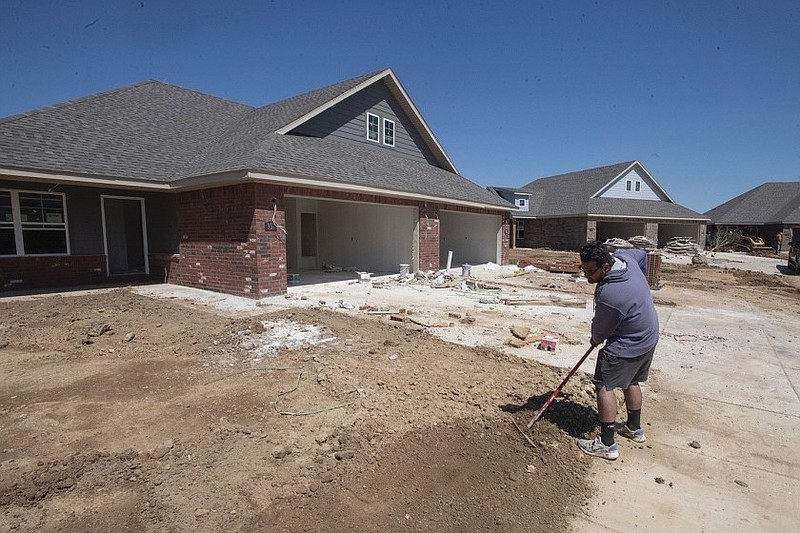 Hector Sandoval of Rogers smooths the yard at a newly constructed house in Farmington in this May 16, 2022 file photo. (NWA Democrat-Gazette/J.T. Wampler)

Economic conditions in Arkansas are continuing to grow, showing "modest improvement" over the first few months of the year, though a report released by the Federal Reserve Bank noted Wednesday that business leaders are pessimistic about the future.

Labor shortages and price increases are driving a negative outlook among business operators, according to Nathan Jefferson, a regional economist with the Fed who covers the Arkansas district. About 48% of business contacts said they expect regional economic conditions during the remainder of 2022 to be worse than in 2021.

"We did see a little bit of a weakening in the outlook," Jefferson said Wednesday. "People are a little more negative, a little more concerned about what the rest of the year is going to look like."

Regional consumers seem to be freed from the constraints of the pandemic and are getting out more to spend cash, the report noted.

Consumer spending "has been fairly strong," Jefferson said, adding that restaurants, airlines and hotels are reporting more dollars coming into the sectors. "We've seen a shift from goods to services," he said, "with people making less online purchases and instead are travelling, purchasing flights and eating out in restaurants."

Even with an uptick in overall economic conditions, troubled spots remain across the state.

Passenger demand at Northwest Arkansas National Airport has not returned to pre-pandemic levels but is expected to do so by the end of the year.

Interest-rate increases have slowed the real-estate sector, yet prices in Northwest Arkansas continue to rise and homes are selling. Current 30-year mortgage rates are 5.35%, up .07% from a week ago. Rates for a 30-year mortgage were 2.98% a year ago.

"It's still a fairly strong real-estate market in Northwest Arkansas," Jefferson said, "maybe even more so than the rest of the district."

Nevertheless, interest-rate spikes are shutting down the refinance mortgage business, the Fed reports, noting that industry layoffs in Arkansas "are possible in the future."

Labor markets in Arkansas and the regional district remain tight and employers are raising wages across the board to retain and attract workers, with one transportation company reporting it has increased pay by 20% or more in the past six months.

The battle for workers is so fierce, combined with the flexibility of remote work, that firms across the nation are raiding the region for workers and luring them with higher pay. "As companies get more comfortable with remote workers as part of their long-term business model, they're recruiting nationwide and people are looking for jobs nationwide in a way they wouldn't have before," Jefferson said.

On the national level, economic growth also was increasing modestly, though the Beige Books reports activity has slowed down over the past few months. Higher prices are curtailing retail spending and the shortage of workers is hindering growth, the Fed said, noting that companies report the labor market as their greatest challenge moving forward. All eight regional districts reported that a more pessimistic outlook for the remainder of the year reigns among businesses.

"Rising interest rates, general inflation, the Russian invasion of Ukraine, and disruptions from covid-19 cases (especially in the Northeast) round out the key concerns impacting household and business plans," the report said.